Netent must have been devastated, looking at the recent Big Time Gaming successes, where they turned the gambling world upside down with their brilliant Megaways concept.

ReelPlay invented the Infinity Reels and Netent the Infinireels

Netent had no other options but to come up with a great new concept of their own. The result? The InfiniReels. Netent introduced this fascinating concept with Gods of Gold InfiniReels.

It goes on as long as you keep on winning, and (in theory) you can have an infinite number of reels.

By the way, Netent needs to share the credits with the Australian game maker ReelPlay, who came up with the Infinity Reels. ReelPlay started with El Dorado Infinity Reels, but until today (April 2021), ReelPlay has already released six Infinity Reels slots.

Coincidence or not, but both Netent and ReelPlay invented this game concept simultaneously. Both game makers share this concept’s patent (trademark): Netent has the InfiniReels, and ReelPlay the Infinity Reels.

After a win, the concept is the same: you see a new reel added on the right. There are some subtle differences as well, which I tell you all about below.

Let me start with ReelPlay’s Infinity Reels and afterwards with Netent’s InfiniReels.

As said, you’ll see an extra reel on the right, following a win. ReelPlay’s slots also have a win multiplier, which increases with an increment of +1 following such a win.

You win if you’ve at least 5 identical symbols (ReelPlay calls these participating symbols). In that case, you get a free respin and an additional reel on the right. Moreover, the win multiplier increases by +1.

It can go on (in theory) till infinity. With all ReelPlay slots, the win multiplier is as high as 888x after the 12th reel addition (so you need 12 consecutive wins).

Below, you see an illustration of how this works with Giza Infinity Reels. 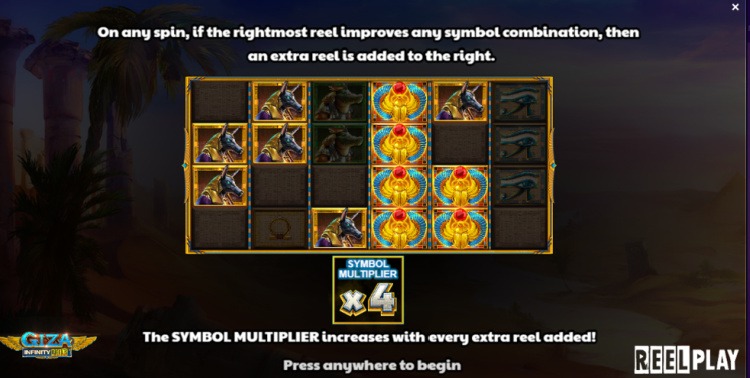 The idea is the same as above, but instead of participating symbols, you get win ways (ReelPlay calls these symbol ways). Indeed do these slots work with the win-all-ways mechanic.

You win once you’ve identical symbols on the first three reels (at least one symbol per reel). You get another reel following a win, and the win multiplier also increases by +1. 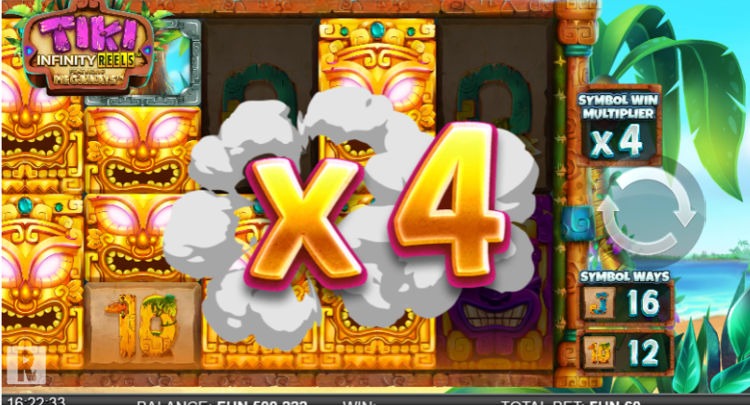 It works similarly to Reel Play’s Infinity Reels Megaways slots and, therefore, with the win-all-ways mechanic.

It starts with 3 reels of 3 symbols each and therefore 27 win ways (ways to win).

After a win, an extra reel appears on the right. It gets you 81 win ways. Also, here, it can go on (in theory) till infinity.

How many win ways do the InfiniReels slots have?

Overview of all Infinity Reels and InfinReels slots

Do you want to have a try and enjoy these beautiful slots?

Choose one of these trustworthy online casinos, register an account, deposit some funds and start playing!