That's quite the tongue twister, but does this slot own up to its promise? Let's see. Reel Play is a small game provider that came on the market in 2019 with something unique: the Infinity Reels slots, where each winning combination gets a new reel.

So you could create infinite ways to win, which in turn results in vast potential.

However, Netent also appeared to be working on their own Inifinity Reels slots concept: the Infini Reels.

The big question was: who was earlier? Reel Play came out first, with slots like El Dorado Infinity Reels and Giza Infinity Reels. Netent followed later with Gods of Gold Infinireels.

To avoid a hassle in court, both parties agreed that they wouldn’t blame each other and would be allowed to release games with the same mechanism independently of each other. 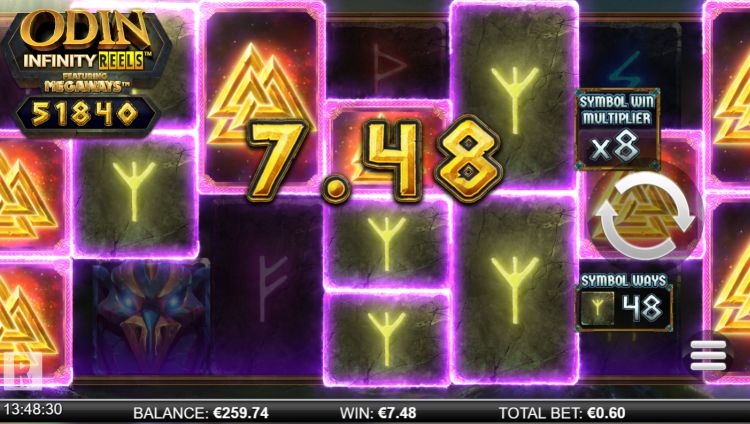 The Megaways mechanism has been added, so you can not only get an infinite number of reels but also with varying compositions.

Does that work? Meh. We don’t feel the Megaways add much to the equation. The Infinity Reels concept in itself is already a potent mechanism.

The reels can only change in height to a limited extent: from 2 symbols to 5 symbols.

So you will be more surprised by the fact that you can extend a long series than by the number of Megaways.

There is an unlimited multiplier active, which is increased by +1 after each winning combination. As soon as the chain is broken, the multiplier is reset.

This is a very high variance slot: you can win a lot (up to 20,000 x the total bet), but your account balance can dive just as much.

The theoretical payout rate at 96.18% is on par. Compared to the best paying Megaways slot games, the Return to Player is a bit low.

Win the jackpot of 888 x the total bet

Are you able to build a chain of 12 winning combinations long? Then you land a grand jackpot worth 888 x the total bet. The accumulated multiplier does not apply to this jackpot, unfortunately. 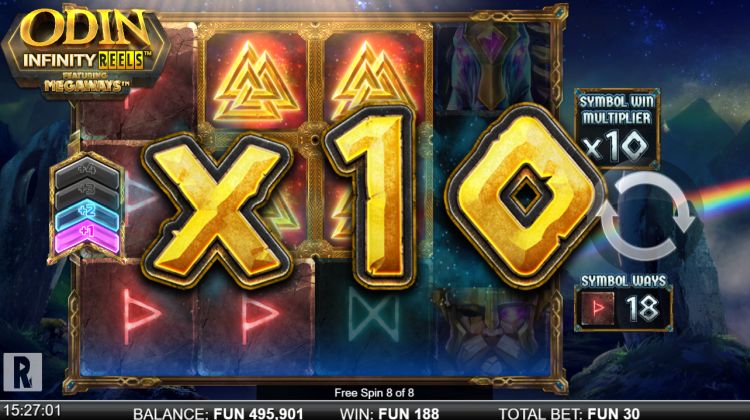 You win if you spin a symbol on three or more reels.

You get paid per symbol. For Odin, you get 8 credits per symbol; if you spin four Odin symbols on four reels in a row, you get 4 x 8 = 32 coins. But it becomes even more lucrative when you spin several symbols on the same reels. Then all combinations are multiplied with each other.

And then, of course, there are those progressive multiplier and wild symbols (the Valknut, three triangles that are connected) to help you on your way to those mega payouts.

The bear, horses and snakes yield between 4 and 5 credits per symbol.

The old Nordic characters award you 1, 2, or 3 credits per symbol. 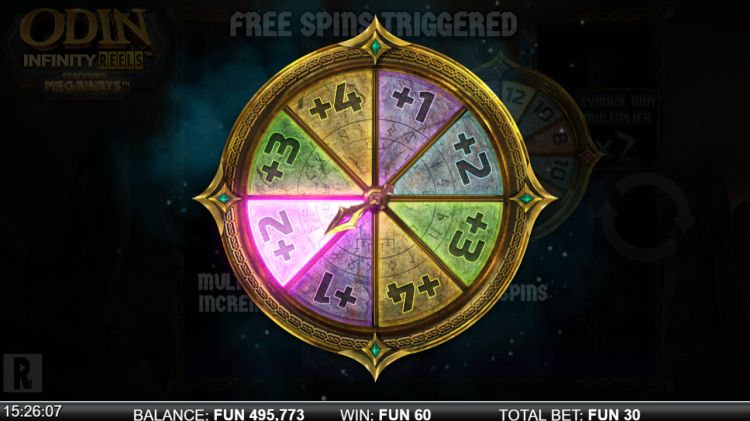 Did you make a winning combination with the Gungnir (Odin’s magic spear that always finds its target)?

Almost as powerful as the Gungnir itself.

The Odin Infinity Reels Megaways online game is a whopper video slot, but for a change, not so much because it’s a Megaways slot.

The cool theme, the infinite reels, the progressive multipliers and the beautiful artwork are the elements that lead to an awesome video slot experience.