Thor Infinity Reels is ReelPlay’s 5th Infinity Reels slot, and this one is a knockout! This slot has more to offer (than, for example, El Dorado Infinity Reels and Giza infinity Reels), thanks to the Bonus Respin feature, where you can land up to 4 different Jackpots.

The Bonus Respin feature resembles the Pragmatic Play’s Wolf Gold Money feature, but now you have an expanding number of reels (in theory till infinity).

The more I play these Infinity Reel slots, the more I start to like them!

Besides the ReelPlay slots, I also enjoyed playing Netent’s Gods of Gold Infinireels, a stunner. And Relax Gaming has also started to work with this new mechanic: Emerald’s Infinity Reels.

Yes, there are some subtle differences between ReelPlay’s Infinity Reels and Netent’s Infinireels mechanic. Still, the similarity is obvious: the number of reels expands after each win and (theoretically) till infinity.

Casino Hipster verdict: HOT. The slot has so much to offer with the 4 jackpots, the fantastic Bonus Respins and the Infinity Reels

Thor Infinity Reels starts with the usual 3 reels with 4 symbols each and works with the Infinity reels mechanic.

For example, if you win three consecutive times, you end up with 6 reels and a win multiplier of x4.

It’s a Norwegian mythology-themed slot, and the four high-paying symbols are the typical symbols like an axe, an armour, a shield and a horn. The six lows are the 9, 10, J, Q, K and A.

The THOR symbol is the Wild symbol, and the HAMMERS are the Scatters, and these symbols also feature in the Bonus Respins. 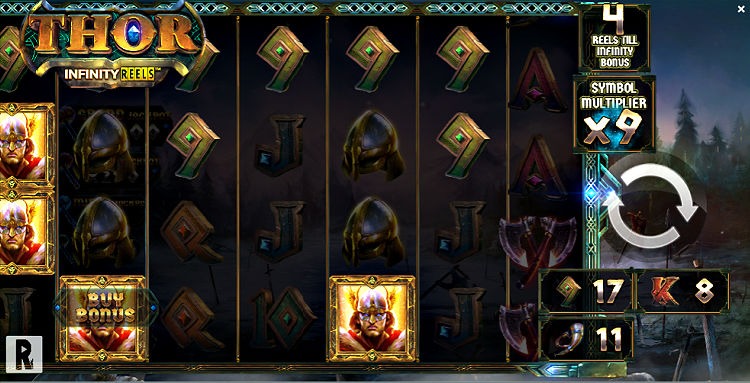 How does ReelPlay’s payout table work?

ReelPlay managed to make the payout structure a bit confusing for all of her slots, but I try to explain it.

You need to have at least five identical symbols. Take, for example, the Axes symbol. It has a value of 5. If you manage to land 6 Axes, you get paid out 30 coins. Divide this amount by 20, and the win is 1.5x.

Once you read all this, you might think that this is not incredibly spectacular. Remember, though, that your win multiplier increases by +1 after a re-spin (and reel addition). That matters. Imagine if you have 8 Axes after five-reel expansions. That gets you a win multiplier of x6 and, therefore, a 12x win (2.0x multiplied by 6=12x).

As with many other ReelPlay Infinity Reel slots, you benefit from an astonishing 888x multiplier, if in the end, 12 or more reels are added. That’s what I’m talking about!

How do you get the Bonus Respin feature?

You need to land at least 6 Hammers to access the Bonus Respin feature.

Alternatively, you make use of ReelPlay’s Buy a Bonus Feature. For 100x the original bet, you get the required triggering spin with at least 7 Scatters (Hammers).

You see several reels with either Hammers and empty positions.

The aim is to fill the vacant positions with Hammers. You get three respins to do it, but if you land a new Hammer, the number of respins is reset to 3 again.

If you fail to land a new Hammer symbol three consecutive times, does the feature end.

During the Bonus Respin feature, it’s possible to land Jackpot Hammer symbols. These are worth either 10x, 50x, 250x and 2000x! 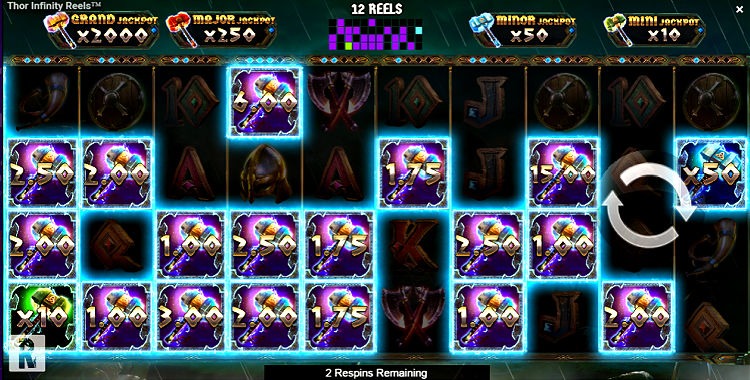 The RTP of the main game is 96.2% and is more or less around the average of all online slots of the larger providers. The good news is that the RTP is 96.6% if you decide to use the Buy a Bonus feature.

Thor Infinity Reels has a high variance, and the max win is just over 6000x.

Given the 888x multiplier and given the 2000x Jackpot, it’s more than realistic to see wins of several thousands of times the bet.