Pink Elephants is yet another new video slot by Thunderkick, known for their original and mostly super entertaining slots When we played Pink Elephants for the first time, something else immediately struck us besides the silly name. The reels setup (4,096 ways to win), the stacked symbols, and the wilds.

Sure, Pink Elephants looks like a 100% clone of the popular WMS slot Raging Rhino.

Has Thunderkick’s creativity finally dried up, causing them – the innovators in the slot games industry – to copy a successful slot?

Fortunately, our concerns soon turned out to be unfounded. Yes, Pink Elephants looks a lot like Raging Rhino at first glance.

Even in terms of variance. However, the bonus feature is very different, and it has an exciting “savings function,” which helps you collect extra premium symbols and extra free spins. 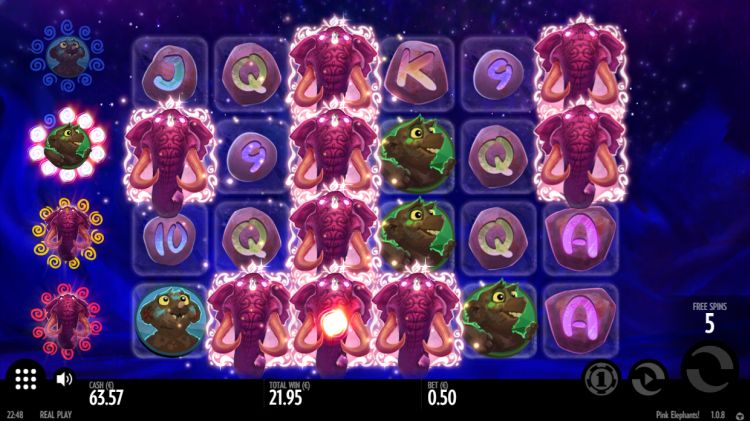 Pink Elephants has no fixed paylines. It works according to the Win All Ways mechanism, which we’ve seen before in Thunderkick’s Flame Busters and other slots.

All combinations of the same symbols from left to right on consecutive reels form winning combinations. 6 reels and 4 symbols per reel make for 4,096 ways to win. You pay a fixed amount per spin – a minimum of $€ 0.20 and a maximum of $€ 100. Pink Elephants’ theoretical payout rate is 96.1%.

The symbols are a colourful collection of wild animals, peanuts, card symbols and… pink elephants. The latter appear in mini stacks and earn you the most. Six pink elephants are worth 10 x your bet.

Because the Win All Ways mechanism is active, these huge colourful elephants can reward you with absolute mega payouts. For example, it’s possible to get a full screen of elephants and win 8,200 x your total bet.

The wild symbol replaces all other symbols except for the green peanut, which functions as a scatter. 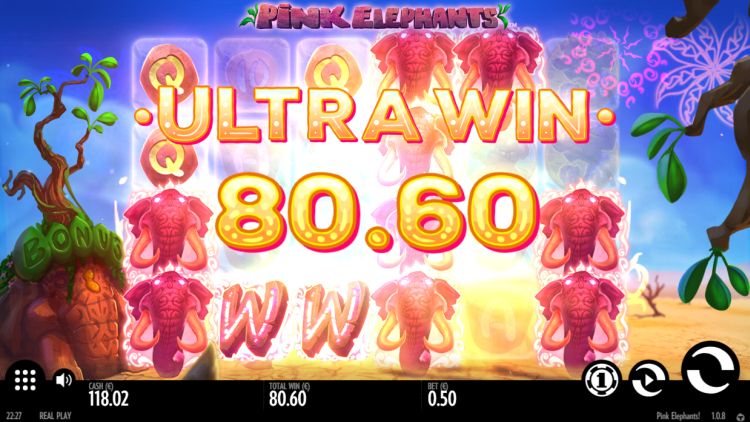 You win the free spins bonus with three or more scattered peanuts: at least 7 free spins and up to 19 free spins. The latter requires 6 scatters. Occasionally the Mystery Scatter Symbol Feature will lend you a helping hand by dropping at least one extra scatter on the reels.

During the bonus game, you aim to collect so-called Elephant Orbs. These are balls of light, which some elephants carry with them. You will see four premium symbols on the left side of the screen, each with an individual Orb meter.

Fill the meter and receive one extra free spin. More importantly, this specific symbol then turns into an elephant for the rest of the free spins. So the further you progress, the more elephants in the game and the higher the chance of mega payouts.

This bonus is very entertaining, but it can be quite fickle due to the slot’s high variance. 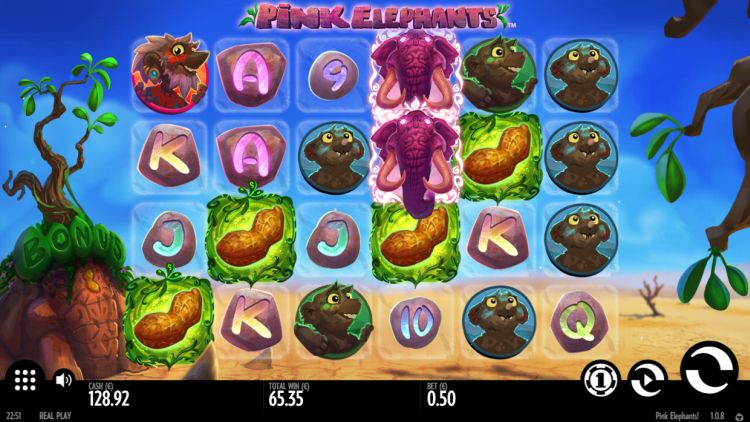 Our verdict on the Pink Elephants slot

Thunderkick has done it again: they introduced yet another incredibly entertaining slot and original at that.

Visually, Pink Elephants is a gem: a wonderfully strange and almost magical atmosphere is created, which is very soothing in one way or another.

The bonus game is exhilarating and can make you vast amounts of money.

Again, two thumbs up for another great Thunderkick slot!