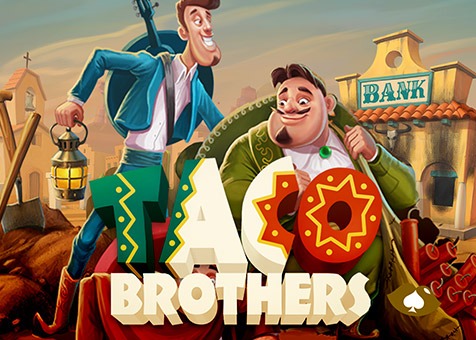 In 2015, Elk Studios was still a very young developer of online slots

The game provider had some amusing releases, such as Sam on the Beach, The Lab, and Electric Sam, under its belt.

Now and then, we scroll back through our reviews to see if we are missing CasinoHipster-worthy slots. We came across Taco Brothers for Elk Studios, and we decided we wanted this slot in our review collection.

And with Taco Brothers, they had another hit in their hands: it’s a wonderfully cheerful slot.

Taco Brothers is set in the lovely Mexican village of Santa Maria in the year 1881. Santa Maria inhabitants are happy with their cozy little town: there is peace, love and above all: lots of tacos. But then the intensely evil Captain Diaz invades the village, and all tacos are banned. Gone is the freedom, gone with happiness and gone are the tacos.

But luckily, this story has a happy ending: the heroes Paco, Pepe and Pico are here to save the day and restore the peace… and the supply of tacos. This is how they earned their name “Taco Brothers.”

Taco Brothers is a very colourful Elk Studios online slot and is packed with surprising features. It looks gorgeous. In the vivid base game, there is already a lot going on with Wilds, respins and 243 paylines, but the bonus game is pure bliss. Three scattered ‘safes’ symbols trigger the bonus feature: free spins with a multiplier of up to 3x your bet.

With each free spin, one of the three heroes starts to move like walking wilds until Captain Diaz appears on stage. Then the hero disappears behind bars. When all three heroes are all jailed, the bonus game ends.

But when the village’s prettiest girl appears, the boys are freed, and the bonus game starts over.

If you have all three Taco Brothers as walking wild on your screen, then mega payouts are around the corner.

All in all, a super enjoyable and an original bonus feature that can make you big money and retrigger the bonus round several times. 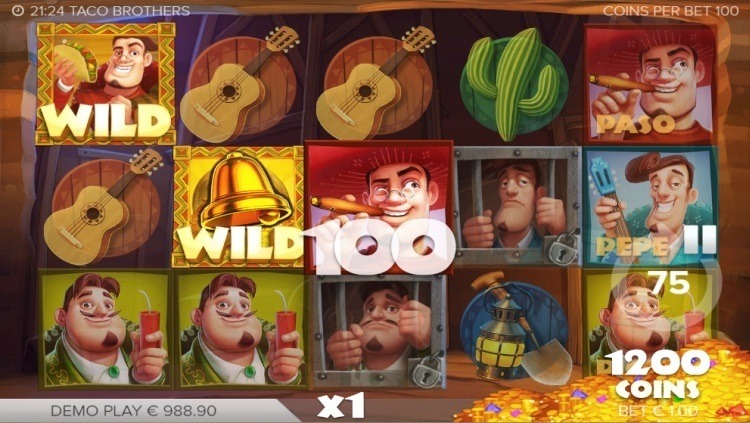 Was Taco Brothers the cutest 2015 slot?

We again played Taco Brothers extensively, and we know for sure: this is one of the best slots of 2015.

Not only does Taco Brothers look stunning, but both the base game and the features are also incredibly original and entertaining.

The creator of Taco Brothers, Elk Studios, was way back then not very well know yet, but this game proved to be one of their pivotal games that tipped their fortune in the right direction.

They were able to follow this title up with many other outstanding and fun games. These days they have proved themselves, but by all means, give this slot some spins for a nice trip down memory lane.