This always seemingly aggressive T-Rex provides payouts that can be as high as 5,000 x your bet.Play’n GO plans to release 40 (!) new slots in 2019, which means almost 1 new slot a week.

With Raging Rex, it is vital to befriend a giant Tyrannosaurus Rex as quickly as you can

Raging Rex is the first of the new year, and Play’n GO is immediately setting the tone in a big way: 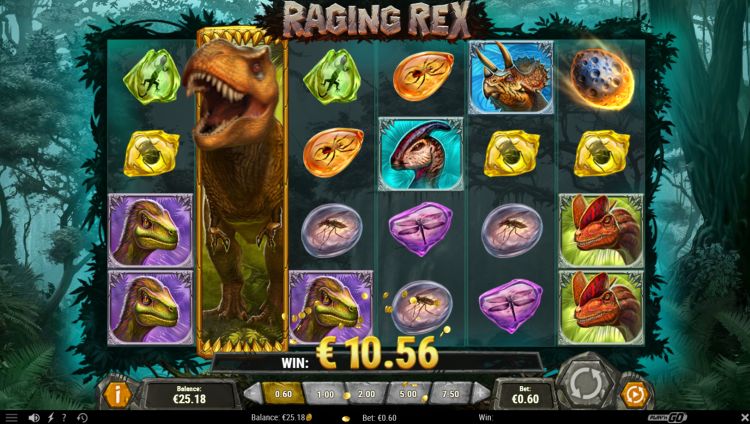 How does the Raging Rex video slot work?

You play Raging Rex on a large playing field: 6 reels with 4 rows of symbols.

The win all ways mechanism is active, resulting in 4,096 ways to win.

The variance of Raging Rex ranges between medium and high. The theoretical payout rate is good: 96.34%.

At least, if you play the game on a server in Malta. If your screen shows: “You are now leaving Maltese jurisdiction,” then chances are high, the Raging Rex slot pays out a lot less.

The premium symbols consist of 5 large dinosaurs, led by the terrifying T-Rex. We don’t know by heart what the names of the other dinosaurs are. But take it from us that they are extinct by now.

Our friend Raging Rex is wild and replaces all other symbols, except the scatters. Besides that, the wilds have some other special functions, but we will address that later.

The low paying symbols consist of 6 fossil animals and are worth between 2 and 3 x the bet, for 5-of-a-kind.

Both the symbols and the wilds can appear multiple times on the reels, resulting in large payouts. If the T-Rex appears as a full stack on a reel, Then the Rampage mode is activated. You’ll get a maximum of 4 respins. The T-Rex with stacked wilds now moves every time one spot to the left. When it reaches the first reel, the feature ends.

The free spins bonus is challenging to win, but it can bring in a lot of money.

3 or more meteorites activate the free spins and get you at least 8 and a maximum of 30 free spins. You also get a payout of 5 x your bet anyway.

You can win two types of free spins bonuses: 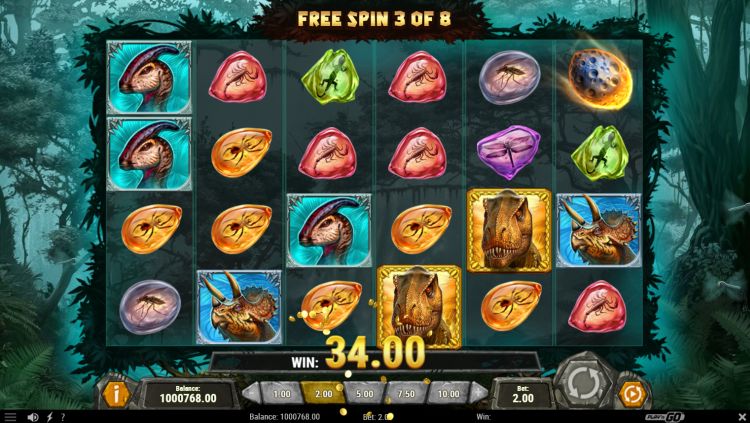 Our verdict on the Raging Rex slot

Unfortunately, Raging Rex does not have the potential to become an online classic.

The balance in the game is too much off for that. You can win substantial amounts in the exhilarating bonus game, but the base game is a dull, sad affair.

The Rampage mini-feature is still quite common, but it doesn’t award you much regularly.

Play’n GO announced this slot as the next big thing: a fierce whirlwind of action and big winnings. We are sorry to say we are a bit disappointed by this release.