Thunderkick has recently released Crystal Quest: Deep Jungle and this slot is a fantastic sequel. Instead of an adventure in the jungle, the experience now takes place in an Arcane Tower. A futuristic tower from which air raids are organised.

As with many Thunderkick slots, it’s all about peculiar creatures or animals. Here, a sorcerer has the leading role, and a Knight Henchman accompanies him. Bear in mind that a henchman is unimportant.

As usual, with most Thunderkick slots, this slot is a bit strange but certainly outgoing and fun to play!

It’s indeed the same as that of Crystal Quest Deep Jungle. For Thunderkick terms, it is very high.

Casino Hipster verdict: It’s an enjoyable and hilarious slot.  Gameplay a bit too similar to that of Deep Jungle, though.,

The gameplay is almost identical to that of Crystal Quest Deep Jungle, with the difference that the linked reels feature is built-in. Below, you see a summary of the gameplay, for those who are not familiar with Deep Jungle.

The slot has 6 reels with 4 rows of symbols, and there are 4,096 ways to win, according to the win-all-ways mechanic.

Furthermore, you have a Wild symbol (a “W”) that replaces all symbols except the scatters. 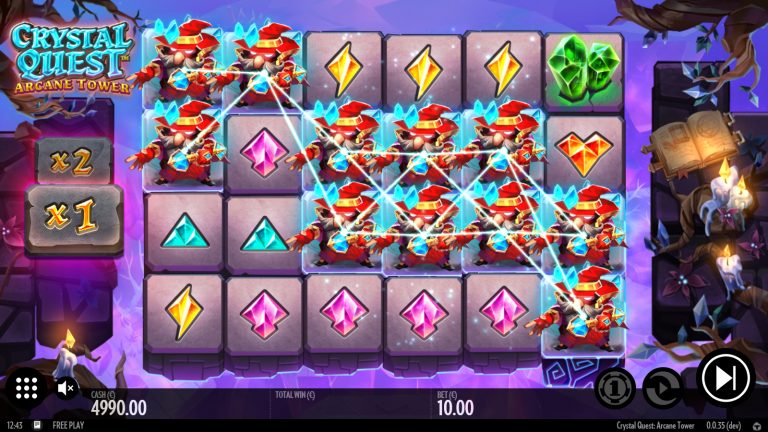 The game has the Avalanche (Cascading of Tumbling) mechanic, and after each win, you get a free respin. The winning symbols disappear and make way for new symbols.

You also have an increasing multiplier that increases with each respin by +1. It only resets, once you fail to get a new respin.

As mentioned above, we also have the Linked Reels feature, which we know from Twin Spin (one of Netent’s most played slots). 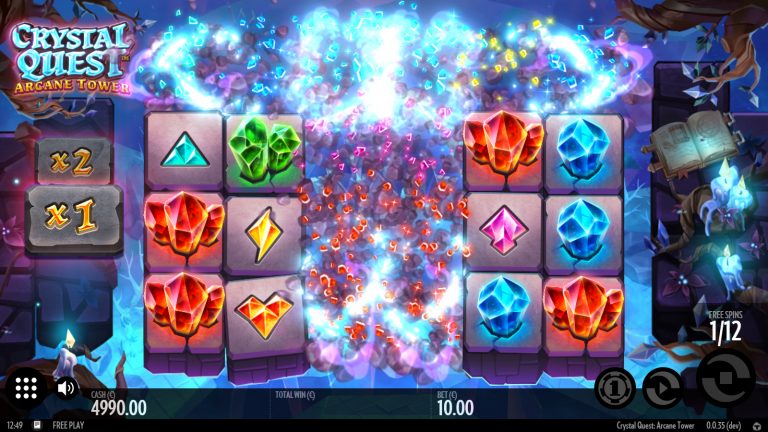 If you land 3 Scatters you get 12 free spins.

During the bonus game, you get 3 free spins for every 2 scatters. Each additional scatter on top of those 2 scatters yields another 2 extra free spins.

The free spins are the same as the main game, but there are two crucial differences.

The Wild Explosion Feature: if you don’t get a win, but do manage to spin a Wild, the Wild symbol will explode. As a result, all symbols on the same reel and row of the Wild symbol, also explode. New symbols replace these. In short, you have double chances!

Increasing Multipliers: as opposed to the main game, you benefit from an increasing multiplier. It only resets, at the end of the free spins session.

It can be a highly lucrative session if you spin many wins at the beginning (and hence obtain a high multiplier) and end up with a big win afterwards. Don’t forget that you have 4,096 ways to win! 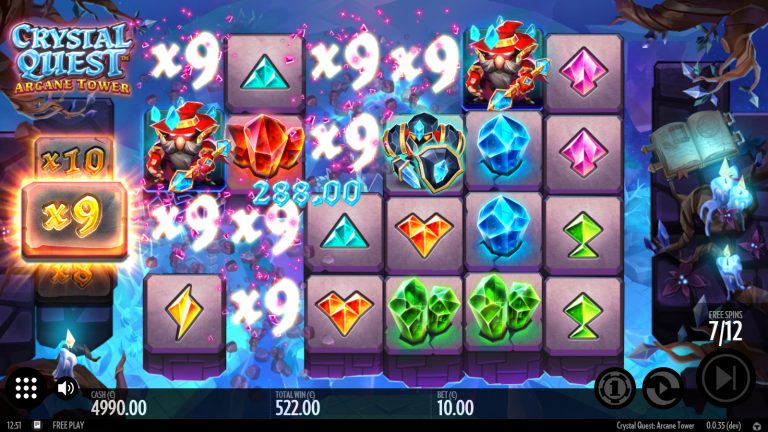 The payout percentage is 96.17%, which is fine and around the average of online slots.

According to Thunderkick, the volatility is 9.80. It results in a medium to high variance. I expect most of the top wins to be around 500x to 1000x.