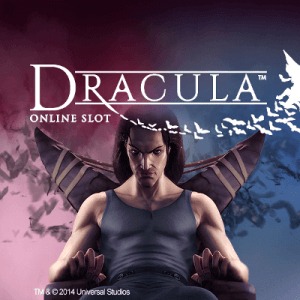 In the intro, we get a glimpse of the troubles that haunt our main character, Dracula.

This poor, tormented villain is forever trying to hook up with a new love of his life. The fact that he tries to drink her blood every time they meet doesn’t help in the romantic department. So she does what any woman in the same situation would do. She runs.

The base game is played on a 5 x 4 grid, with 40 pay lines. Symbols are stacked, including the triggering symbol for the bonus games.

Dracula plays smoothly and is a highly polished slot, as we have come to expect from Netent.

There are two bonus features, one mini-feature (the Bat Feature) and one free spins bonus (the aptly named “Free Spins Bonus”). 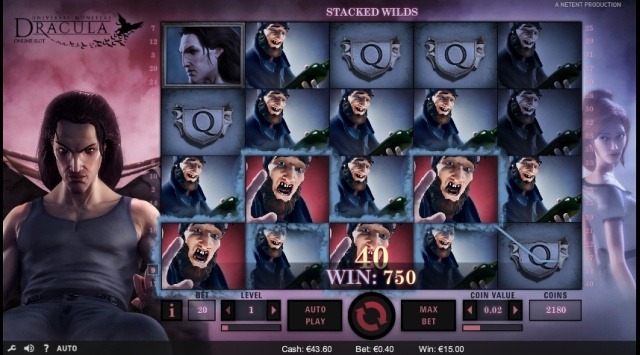 The “Bat Feature” mini bonus is triggered at random. Dracula gets into a trance and transforms himself into a swarm of bats.

These winged friends will land in formation on the reels and turn into a random symbol (including wilds).

The more bats you land and the higher paying the symbol, the bigger your win. Even more so if the bats land in strategically desired spots (on the first, second, and third reels).

The Bat Feature triggers very frequently and can bring in some nice wins. Of course, you will get the occasional dead spin as well, but that is to be expected.

You are awarded 10 free spins where every spin is a Bat Feature spin.

You can earn extra free spins during the free spins, although it is rare to win more than a few extra spins per feature. The Free Spins bonus is a great feature: fun, exciting, and serious potential for some great wins.

Netent’s Dracula is a fantastic slot: fun, polished, and has some great and innovative features.

Bonus features come fast and frequently and will often award you with some very nice wins — one of Netent’s better slots.