Beat the Beast: Quetzalcoatl’s Trial (Thunderkick) is a fantastic slot with an Aztec mythology theme

It’s all about the feathered serpent God Quetzalcoatl, and rightfully so.

After all, he was one of the most prevalent Gods in Aztec mythology, where he stood for wind, water, air, nature, life and much more. Quetzal stands for precious, and Coatl stands for twins and snake.

The aim is to stay close friends with Quetzalcoatl. It’s indeed a challenge, but also a great honour to take!

On Quetzalcoatl’s Trial, you can land wins of up to 5,555x the bet

With the maximum bet of a hundred, you can bring home over half a million. Yes, of course, not everyone will stake a hundred just like that. But even with one $€, you can bag a lovely five grand. 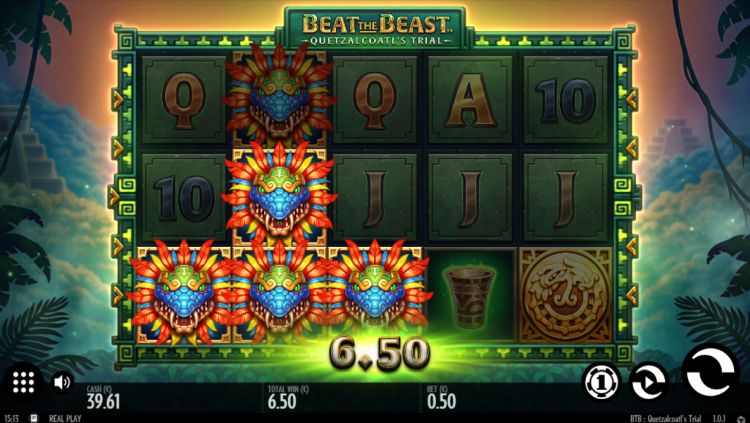 The game has 5 reels with 3 rows of symbols, and there are 9 fixed paylines.

How do you activate the free spins?

If you spin 3 Golden Quetzalcoatl Emblems (Wild Scatters), you activate 10 free spins, and besides, you get a cash win of 2x the bet. 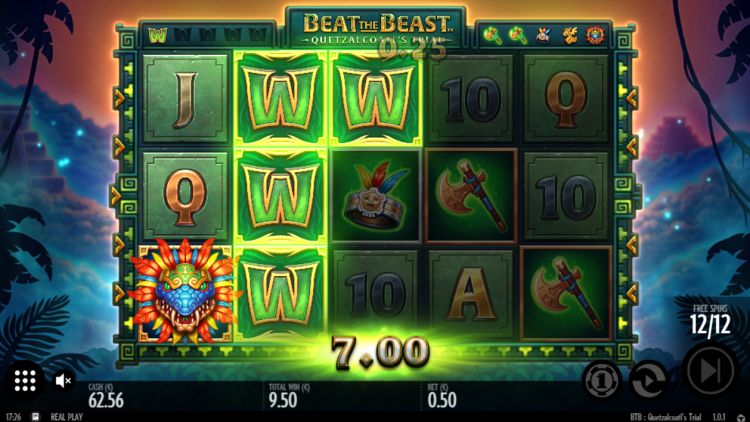 Now it’s a matter of spinning as many Wilds as possible. Besides the fact that it’s easier to make winning combos, you get to collect the so-called “Orbs” (bright white balls). 5 Wilds gets you 5 Orbs, which brings you to the next level.

Now you get two additional free spins, but furthermore, the less attractive Cup Symbol upgrades to the Axe symbol.

If you spin another 5 Wilds, you progress to the next level again, and the Cup and Axe symbols both upgrade to Crown symbols. And, again, you get two extra free spins.

If you manage to spin 5 Wilds again, the Cup and Axe and Crown symbols all change to Quetzalcoatl Statuette symbols.

After the next 5 Wilds, all medium paying symbols upgrade to the best paying symbol: the Quetzalcoatl symbols.

The RTP is 96.16%. It’s okay, but not spectacular. It’s in line with the RTP of the other Beat-the-Beast slots.

According to Thunderkick, it’s a high variance slot. Quite similar to the other 3 Beat-the-Beast slots. These all have high volatility.

If we are to believe Thunderkick, we can expect to see top wins exceeding 1,000x the bet. 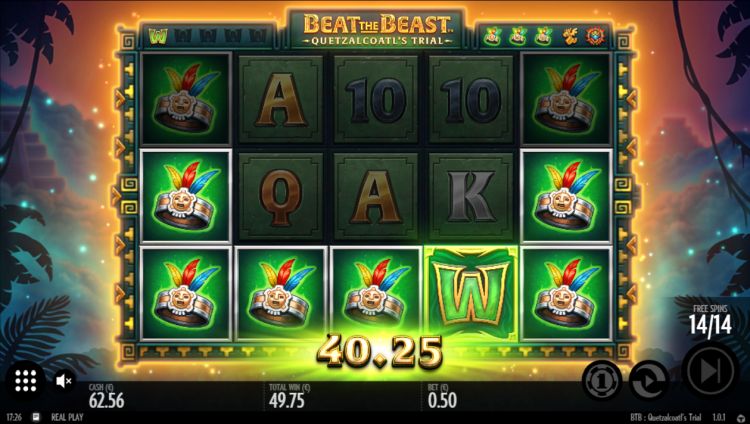 This slot suits those players who are not into playing overcomplicated, straightforward (fruit) slots.

If you love slots with an original and crazy theme, then you’ve found it here! That’s what Thunderkick is known for best.