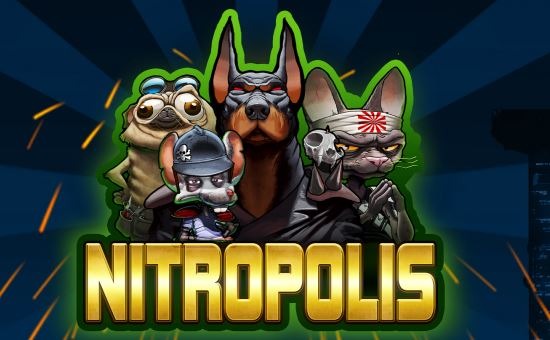 In the post-apocalyptic era, the world is run by four new groups of creatures, or clans. We have the so-called Dirty Dawgs, the Gritty Kitties, the Pug Thugs, and the Rouge Rats. Welcome to the new world called Nitropolis!

Nitropolis slot (Elk Studios) – The world ceases to exist… So what happens next?

The four clans aim to get their hands (or pawns) on the precious green Nitro liquid that fuels their cars. One clan survives and will rule Nitropolis. Which family will you join?

You can say whatever you want to say about Elk Studios, but the theme is extraordinary and one to remember. And the gameplay? Also!

Nitropolis: if everything goes well, you can bag the top 10,000x win!

It looks like Elk Studios has set itself a new default max win.

The last two slots they just released (Grand Galore and Visitors) also have the max win of 10.000x, whereas all other Elk slots have a max win of 5000x or less. 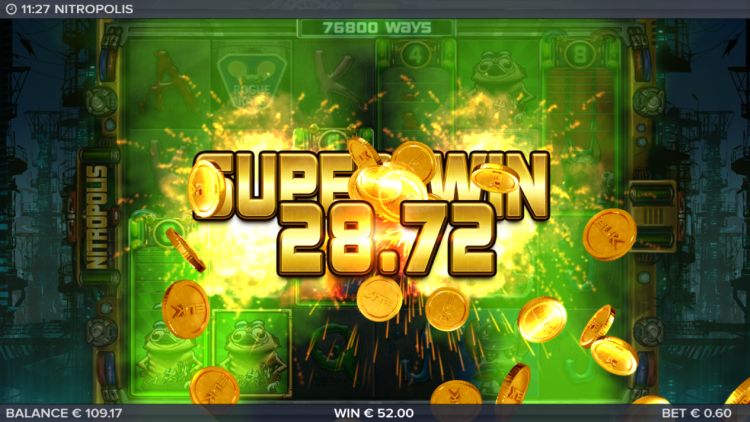 On top of that, Elk Studios has introduced the Nitro Mechanic (and applied for and received a trademark). It is possible to get Nitro Reels with 4, 6, 8, 10 or even 12 (!) identical symbols. These symbols are, as it were, stacked on top of each other.

A Nitro Reel covers 2 of the 4 positions on a reel. As there are 4 positions per reel, it is possible to get 2 Nitro Reels of at most 12 identical symbols on one reel.

Besides, you have Wild symbols (a bomb explosion) and scatters (a kind of an engine). 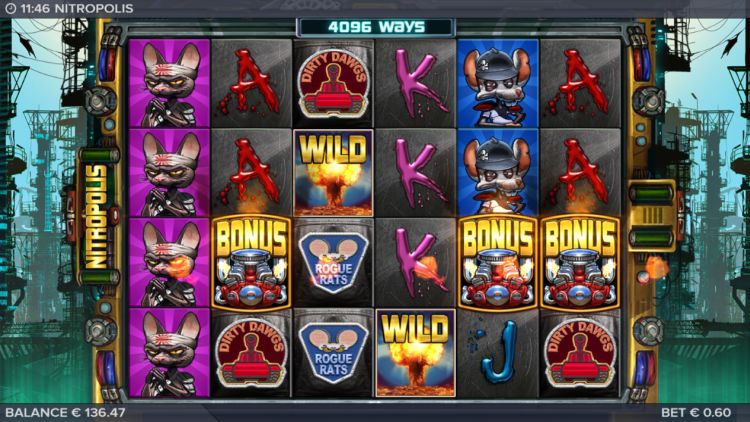 With the Nitro mechanic, you can get 4 up to 12 stacked symbols, thereby massively increasing the number of ways to win.

There are a few more attractive features, though.

You have the Nitro Reel Upgrade, which gives you a free respin at random moments and converts the current Nitro reel symbol into a higher-paying symbol.

Also, Elk Studios built the Second Chance Respin feature, where you get a free Respin and a second chance to grab a winning combo.

By the way, after a win, you get an extra free respin anyway. The so-called Winning Respin Feature continues until you fail to spin a bigger win or new winning combo.

But there is even more!

The free spins play the same as the main game, but there are two essential advantages.

You have the Locked Nitro Reels feature, where the Nitro Reels remain sticky for the remaining free spins.

With the Scatter Pay feature, a symbol is randomly selected for scatter wins.

The payout percentage of Nitropolis is 96.1%. It exceeds my critical 96% limit.

The variance (volatility) of Nitropolis is medium to high.

Elk Studios gives a score of 8 out of 10 for volatility. In other words, the variance is medium to high.

It goes with no surprise that you can win big, with the 85 million ways to win! I expect the top wins to be around 1,000x.

Other Elk Studios slots with similar volatility are The Grand Galore, Diablo Reels or the excellent Visitors slot.

Players looking for a slot that they have not seen before are at the right place! The gameplay does come with risk, though. Nitropolis is quite the volatile slot.