You have two types of Gold Diggers in this world: the metaphorical and the literal kind.

The figurative Gold Digger is often a handsome but not too bright person who tries to marry as rich as possible, only to live in luxury. Raking in the riches and enjoying the good life – you get our drift.

Then, there’s the literal Gold Diggers: miners who risk life and limb to try to dig up as much gold from the mine as possible.

The Gold Digger of this iSoftbet slot is an old, amiable boss, with only one (gold) tooth. Since settling down with a rich woman is out of the question, he helps you dig his riches out of the gold mine. 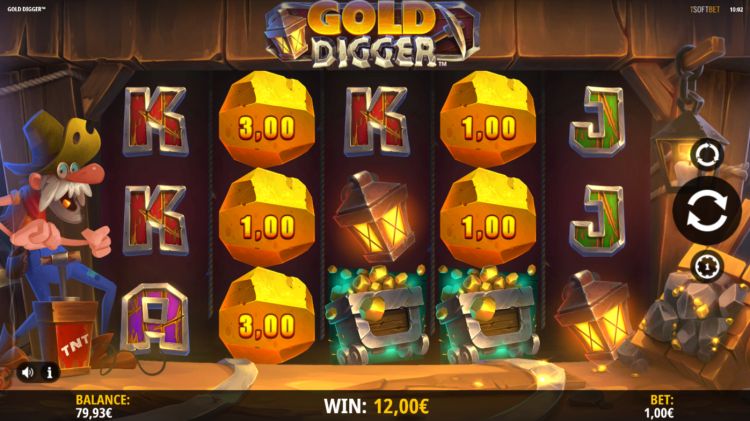 Gold Digger is a friendly slot that doesn’t take itself too seriously.

The old boss is the sidekick of the slot game and stands on the screen’s left side to encourage you and occasionally conjure up a mini-feature out of his overalls. The excited look in his eye gives away that, despite all his visible years of hard work, he still hasn’t given up hope of making that elusive big fortune.

This is, by the way, entirely possible with Gold Digger: the maximum win is over 8,000 x the total bet.

In terms of variance, we estimate Gold Digger to be medium to high. You can land big paychecks, but that’s pretty rare.

The game has 20 fixed paylines, divided over 5 reels and 3 rows of symbols.

The theoretical payout rate is 96%, just on par. 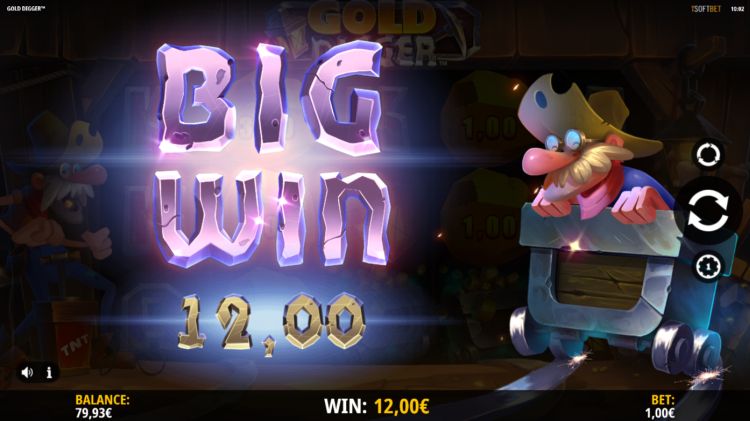 The wild symbol replaces all other symbols except the scatters.

The Old Boss is the highest paying regular symbol and awards you 25 times the total bet with a 5-of-a-kind.

Other high symbols are the miner’s cart, a pick-axe and a lantern.

Spin five of the same for prizes between 5 x and 15 x the total bet.

Did you spin five similar card symbols (J, Q, K or A) on an active payline? Then you make between 1.50 x and 4 x the total bet. 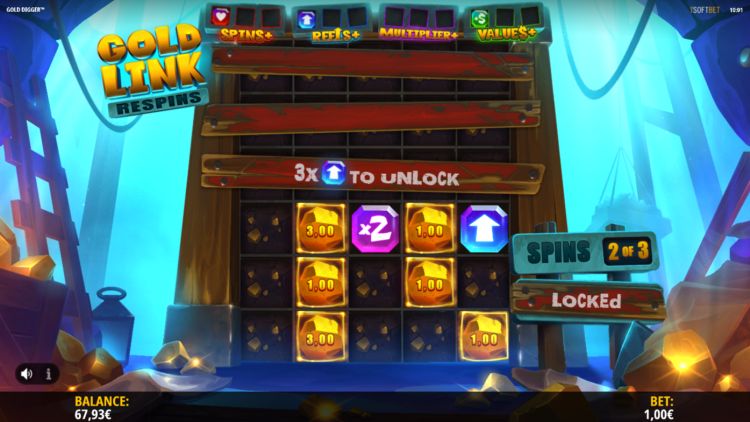 Our friend, the miner, has some surprises in store for you now and then.

We don’t know exactly where he gets them from, but he goes to work with dynamite once in a while.

Sometimes he throws dynamite sticks on the reels, turning them into wilds.

He can also detonate TNT, which upgrades your symbols resulting in higher prizes.

And then he can also award you with extra gold nuggets. You’ll need those to activate the main bonus feature.

The main bonus round: respins with additional prizes

As soon as there are five more scattered gold nuggets on the reels, you’ve won the main bonus.

The nuggets contain a cash prize anyway: so that’s easy money in your wallet.

But you can earn a lot more.

Through the famous respins (you get three, which reset after each prize), you can earn all kinds of lucrative extras:

Our verdict on Gold Digger

The Gold Digger video slot is a hugely entertaining iSoftbet game. The company is doing very well in 2020 anyway, with outstanding releases, such as Dragon Match Megaways.

The mining boss is amusing and sometimes helps you get your hands on sweet boosters. Besides, the main bonus feature is fascinating.

Lastly, you can also win serious money with Gold Digger: up to 8,230 x the total bet.

As playful and cartoonish as the slot is, so seriously big is the potential.