Norwegian mythology, along with Egyptian mythology, has always been a favourite subject for slot providers.  The tough-looking Viking gods, the fortress Asgard, the mysterious runes symbols: it all fits an exciting slot, where you can make some big bucks. With Ring of Odin, Play’n GO introduces an attractive slot with good looks to boot, yielding serious money prizes: up to 5,000 x the total bet.

Right off the bat, we were unfortunately confronted with a lack of balance in the game. This downside seems to turn the online game into an all-or-nothing video slot, although you can make undeniably more than an armload of money. Rarely has our account balance evaporated so fast, and were the bonus features as disappointing as with Ring of Odin.

Now we also know it’s a snapshot, and you certainly can’t always be lucky. Still, with thousands of Ring of Odin spins under our belt, then being “rewarded” with two bonus features that not even returned 80 x the bet? 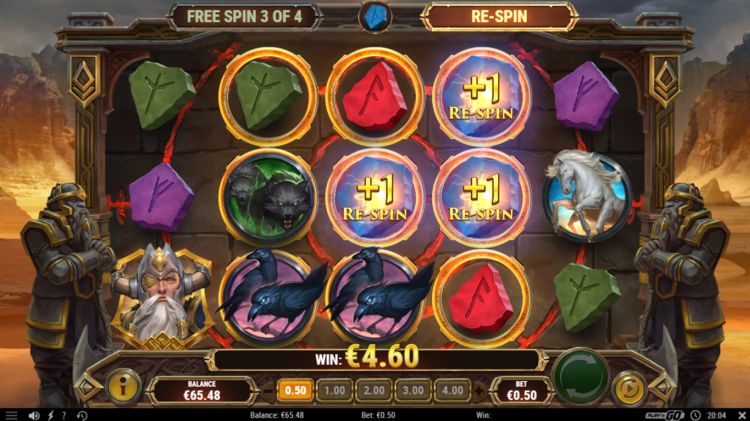 Ring of Odin gameplay and features

The Ring of Odin video slot has 5 reels with 3 rows of symbols and 10 fixed paylines.

As you already know, with most Play’n GO slots, you choose your stake from the menu bar: a minimum of 10 cents and a maximum of $€ 100.

You can win a maximum of 5,000 x the bet with Ring of Odin, and the variance is high.

The default theoretical payout percentage of 96.20% is very much on par.

Beware – Please check the game rules before you start spinning Ring of Odin with real money: there are also versions in circulation with a significantly lower Return to Player. 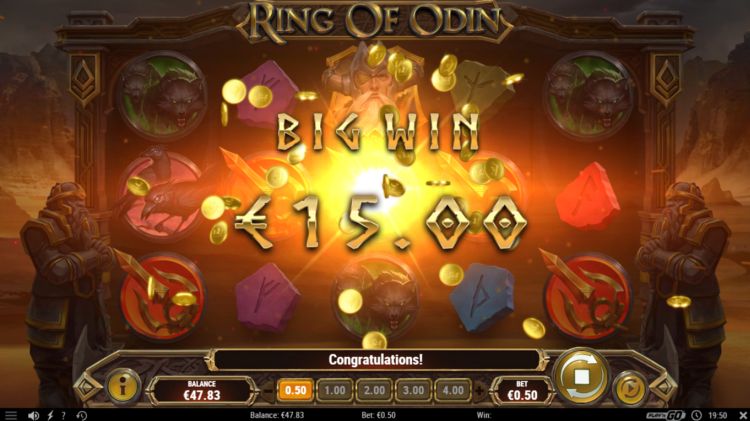 Odin himself is wild and replaces all symbols except the scatters. Have a 5-of-a-kind of wilds drop on the reels, and you will be pocketing 30 x the total bet.

The trident, the horse, the crows and the wolves are all premium symbols and return you between 10 x and 30 x the bet with five of the same on an active payline.

The low symbols consist of four coloured stones with runes characters on them: these are worth between 2.5 x and 5 x the bet. 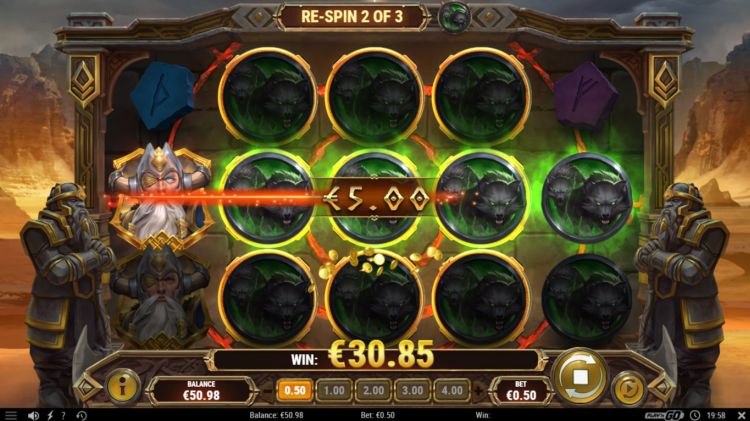 At random moments Odin’s magic ring can become active, precisely in the middle of the playing field (3rd reel; 2nd row). It then captures a symbol, as it were, and then a free respin follows.

If you manage to spin the captured symbols a minimum of 1 x (and a maximum of 9 x) in the special box of rings on the middle three reels, you win the Draupnir Respins.

So it is crucial to hitting the special symbol with the highest possible value (the wild is most desirable) and earn as many Respins as possible.

The scattered eye symbol is the key to the free spins bonus. You might think, what does a scattered eye look like? No worries, you will recognize this symbol. As soon as the Rings of Odin slot develops an iron piercing gaze at you, then you’ll know, ah the scattered eye!

Anyhow, we digress. There are two ways to earn the free spins bonus:

In both cases, you get four free spins. But with the second option (Odin’s Ring Feature), you also get so-called Enhanced Free Spins: Free spins with an extra multiplier, up to a maximum of x 9.

Unfortunately, this Enhanced Fee Spins thingy is a sporadic event due to the high variance and/or the game’s (possible) imbalance.

During the free spins, Odin’s Ring Feature is always active. 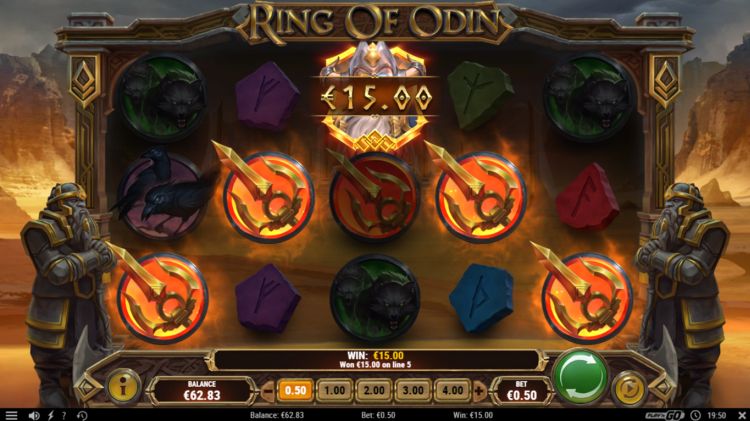 Our verdict on Ring or Odin

The Ring of Odin release is another stunning Play’n GO video slot. This Swedish game maker now leads the online slots market by a considerable length. We hardly ever see them release weak slots. But, can good looks be deceptive?

With Play’n GO’s successful track record, we automatically raise the bar a bit more, and that may explain why we are a bit disappointed. Because with any slot from our top 10 best Play’n GO slots list, or, for instance, Viking Runecraft, they prove they are more than capable of delivering extraordinary slots.

One of our pain points has to do with the Draupnir Respins. They altogether take too much time to complete and quite often have an undesirable result. As we stated at the beginning of this review, the game’s balance seems to be a bit off.

And to be honest, our disastrous results with Ring of Odin didn’t help either.

Nonetheless, despite our gripes, we will award Ring of Odin a fair number of stars.