Play’n GO released Jolly Roger in 2012, which was, in a word, dreadful. It featured terrible graphics, lousy gameplay and a ridiculous, pathetic payout rate of 94.98%.

And to be honest, Play’n GO stepped up a couple of gears. Jolly Roger 2 might have the same name, but that’s about the only thing that did not change.

And that’s the default max win of most Play’n GO slots nowadays. Not bad at all! 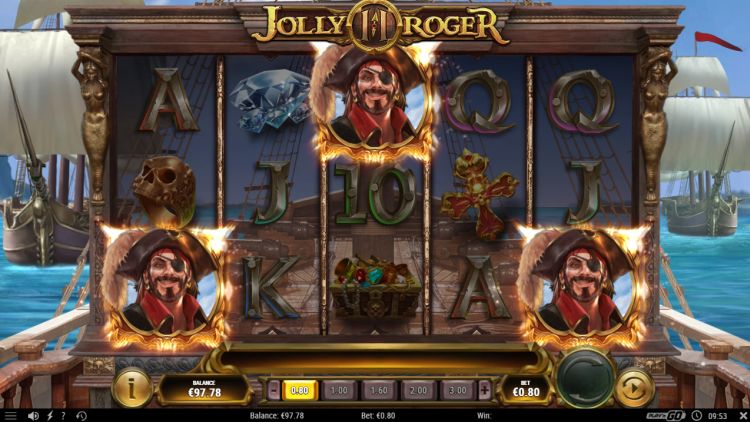 Jolly Roger 2 has 5 reels with 3 rows of symbols and 20 fixed paylines.

The Wild symbol is a Black flag with a skull and bones. You recognize the Scatters by the Captain with a black hat, moustache and goatee.

In the main game, you have the Compass Feature.

It activates at random moments, and gets you a multiplier of 2x, 3x, 5x, 8x, or even 10x for the upcoming spin.

If you get the 10x multiplier and grab 5 Treasure chests on a payline, you are talking about a 100x win.  Yes, a screen with Treasure chests is 200x, but thanks to the Compass Feature, it can well be a blistering 2,000x! 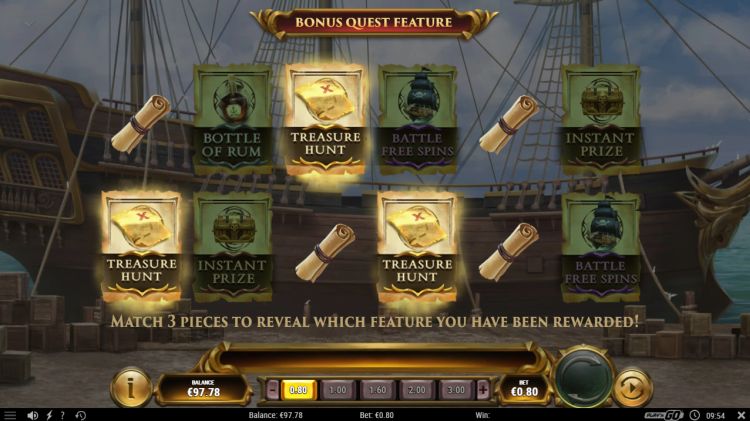 You activate the Bonus Quest Feature, by spinning Scatters on reels 1,3 and 5.

Now you get to the “Choose a Quest” screen. You see 12 parchments. You open these until you open three identical ones.

Eventually, you get access to one of the four following bonus games:

Instant Wins: You get 2x to 20x cash win, but with the Compass Feature, it can be multiplied (up to 10x).

Bottle of Rum free spins: One bottle is poisonous, but the other four are not. If you pick the right bottle, you get a spin with one fully Wild reel. Afterwards, you choose the next bottle. The feature stops, once you select the poisonous one. Also, here, you benefit from the Compass Feature.

Treasure Hunt: It gets you ten free spins, and at the bottom of the reels, you’ll see a ship. When it stops on the X, it digs up a chest. There are 7 in total, and these get you multipliers, symbol upgrades and extra wilds.

Battle Free Spins: It’s the most spectacular (and time-consuming) bonus game. Your ship battles another ship (British, Portuguese or Dutch ship), and you have three lives.
As long as you stay alive, the reels continue to spin. If you defeat a ship, you get an extra life. Anyway, there are many features to be won here, improving your odds of some great combinations.

You can take a seat and enjoy this feature. It can easily take up to 10 minutes before you play the final spin! 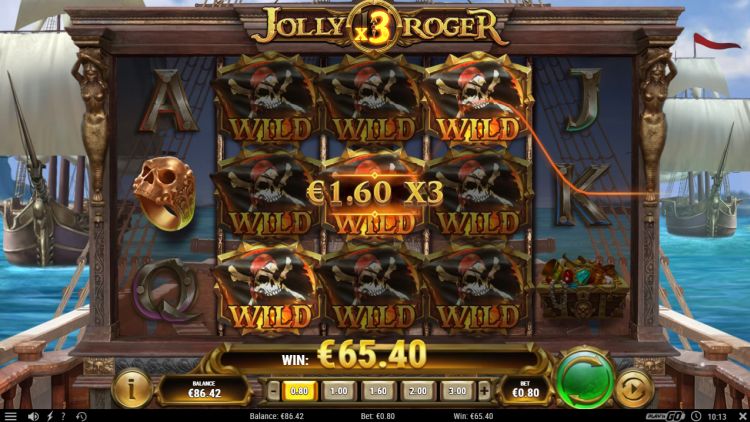 The default RTP is 96.2%. Unfortunately, some casinos offer versions at a lower payout rate. It’s best to check the Jolly Roger 2 game rules.

The variance (volatility) of Jolly Roger 2 is medium

According to Play’n GO, the variance is medium. I expect the top wins to be around 500x the stakes.

The top win of 5,000x is a utopia unless you’re prepared to spin millions of times. Other Play’n GO slots with similar variance are Twisted Sister, Win-A-Beest and Blinged. 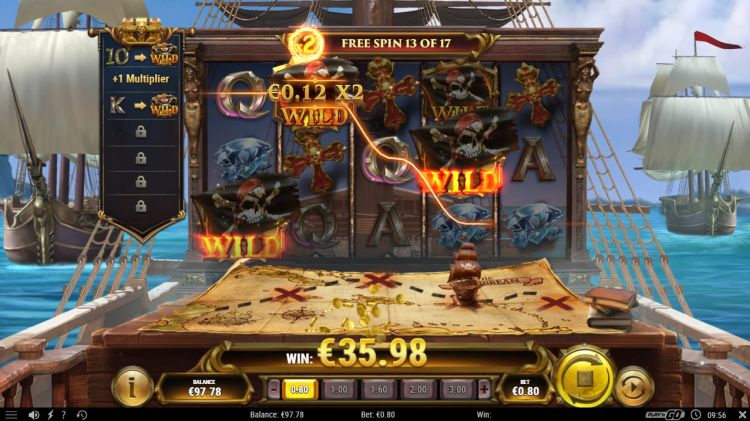 Players seeking slots with lots of variety, gameplay and features do not need to look further. This slot has a lot to offer.

Players aiming for (quick) massive wins, won’t find it here. On top of that, the slot plays slow and has lots of intervals.

The slot is not volatile enough for the massive wins.