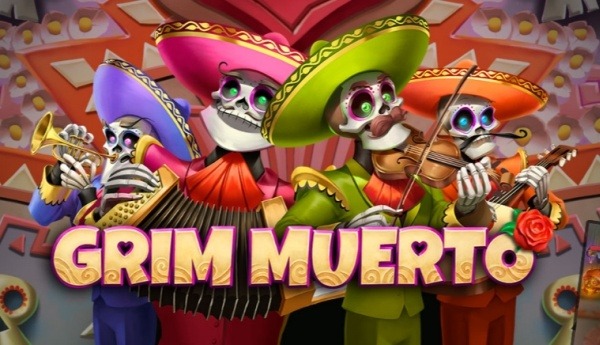 Play’n GO, a Swedish slots game developer, is slowly, but surely, turning into a major player in the online gaming market

Even though they haven’t been around for very long, they’ve already produced quite a few top-rated titles.

How about Gemix, Moon Princess, Energoonz, Book of Dead and Cloud Quest?

Each one of these Play’n GO games is popular with lots of loyal fans. We believe Grim Muerto will also be a big hit among slots fans.

This Mexican “Mariachi” style slot looks amazing. We have seen the combination of death and Mariachi band before in Thunderkick’s Esqueleto Explosivo, but who cares?

Grim Muerto is a slot in and of itself, and we were rather positively surprised. There are five reels and 20 fixed paylines, and you are warmly invited to join the Mariachi band into the realm of the dead. It’s Día de Muertos – the day of death, and in Mexico, this means it’s time for a celebration.

Celebrating is easy with such a fun slot. It has an excellent payout rate of 96.51% and a few exciting features such as expanding wilds and a second chance feature – offering you an extra possibility to win the bonus.

There are 20 fixed paylines with a minimum bet of $€ 0.20 per spin. If you want to bet more, it is a matter of increasing the coin size and/or the number of coins per line. This way, you can bet up to a maximum of $€ 100 per spin.

So, the Grim Muerto slot is suitable for both the recreational players and the high rollers who love more risk.

The most important symbols in Grim Muerto are the book (activates the bonus), the guitar (wild) and the four band members (get you extra wilds in the bonus).

During each spin, 1 of the 5 reels turns to gold. If the wild symbol drops on a golden reel, the symbol turns into an expanding wild. Of course, this can significantly boost your profitability from time to time.

The Grim Muerto bonus: lots of wilds and respins

Three scattered book symbols activate the free spins bonus. These symbols only appear on reels 1, 3 and 5. You always start with 10 free spins and every candle which hits the reels during the free spins awards you three extra free spins.

Strikingly, in the Grim Muerto bonus round, you often get retriggers thanks to the candle symbols. Getting three extra free spins, again and again, adds up nicely. It’s not uncommon to end up with more than 30 or even 40 free spins.

By the way, if three book symbols hit the reels once more, you will win an extra 10 free spins.

If two book symbols hit the reels during a spin, then you automatically get the “Second Chance” feature. The 4 Mariachi band members appear on the screen, and you can pick 1. Behind these band members hide either (small) cash prizes, nothing at all or a book symbol. The latter also activates the free spins feature and always results in cheers (among us at least). 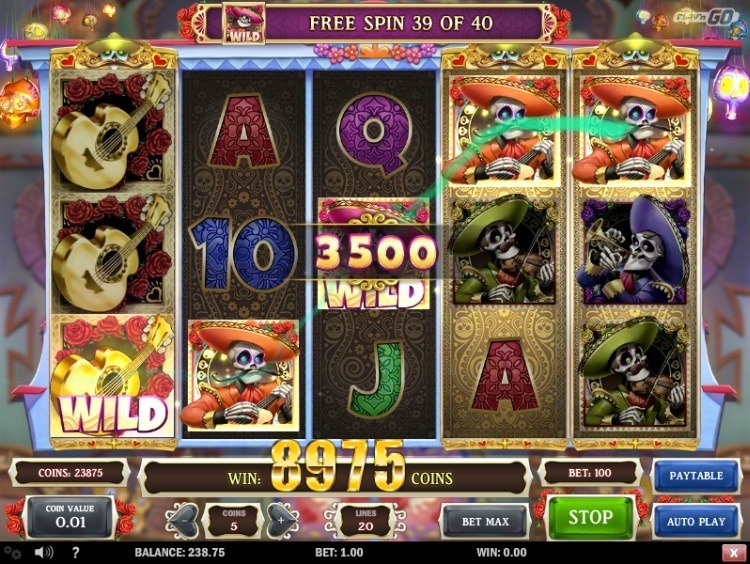 Our verdict on the Grim Muerto slot: a beautiful slot!

We award Grim Muerto an excellent score of 3.8 stars out of 5. A well-designed Play’n GO slot with a beautiful, colourful theme and lots of fun and original features such as the second chance bonus.