This time, Netent has chosen to give BerryBurst Max an Oriental makeover. Although this is a logical thought (BerryBurst Max is still a very popular title), unfortunately, much of the original’s magic has been lost.

The fruit with BerryBurst Max almost popped off the screen, so colourful and juicy. We now have to do it with some tired looking coins in bubbles.

Only the expanding wild (the Dragon King) still looks somewhat exciting; otherwise, all the energy has been drained, and the video slot seems to be driving on flat tires.

Too bad: the cluster pays mechanism and the considerable variance (you can win up to 6,000 x the bet) offer enough potential for an exhilarating experience. 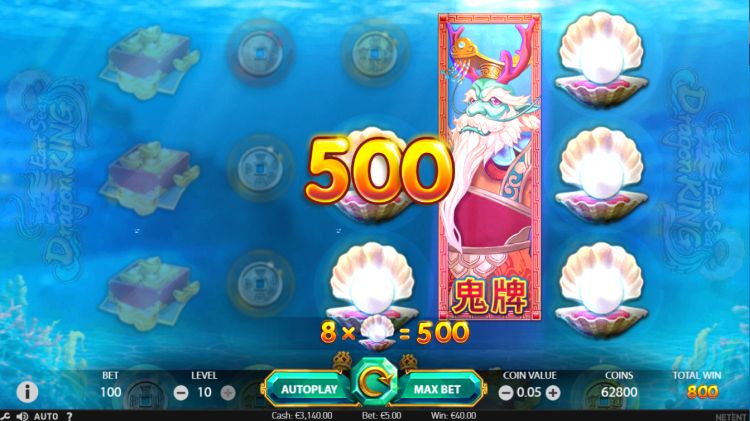 East Sea Dragon King is played on 5 reels with 3 rows of symbols. There are no fixed paylines, but the cluster pays mechanism is active.

Meaning, you have to spin groups of five or more of the same symbols to get a payout. The higher the symbol and the bigger the cluster, the higher the profits. 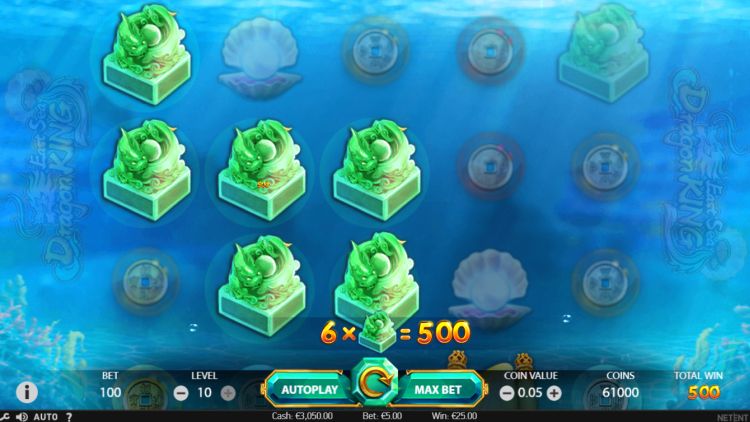 The four premium symbols consist of a green dragon, gold nuggets, a treasure card and an oyster with a pearl in it. These symbols will yield you a maximum of between 2,500 and 10,000 coins. For this, you have to spin a cluster of 15 identical symbols, which amounts to a full screen.

The three coins are all worth 1,000 coins with a full screen.

Then there is the wild symbol. This is the Dragon King himself and can drop on any role.

But that’s not all: the wild expands over the entire reel and awards a free respin. As long as you keep on hitting new wilds, you earn extra respins. A Starburst-like feature, however, with one significant advantage: you now CAN win big money.

In contrast to Starburst‘s meagerly maximum of 500 x the total bet, East Sea Dragon King allows you to bring home no less than 6,000 x the stake.

Unfortunately, that concludes it for the bonus features. There are no free spins, no mystery multipliers, no mystery symbols. 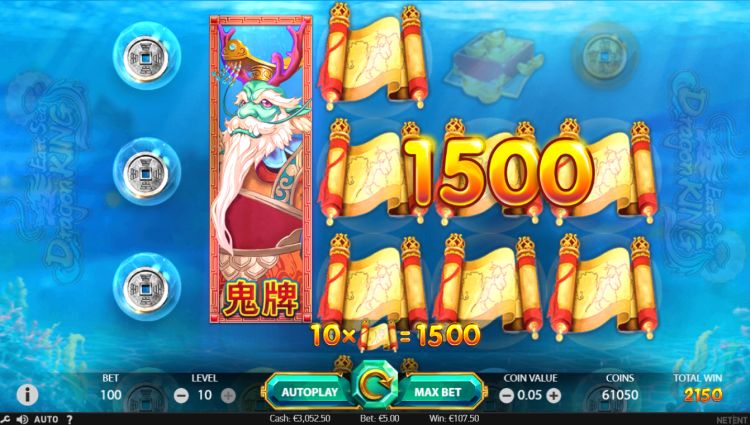 Netent has not put their backs into it; far from it with East Sea Dragon King, they cut corners.

The original was entertaining but straightforward, and that had everything to do with the beautiful design.

If you replace those flashy graphics with a dime-a-dozen kind of symbols, a lot of the magic is lost.