Starburst was released in 2012 and looked very futuristic, especially for that time.

Before I knew it, every reviewer talked about Starburst.

Of course, 2012 was a period when the number of new slots was still limited.

Now, as we speak in 2022, Starburst has become an oldtimer.

The slot doesn’t have much of what is now demanded of slots.

The critical question is: why should you have to play this slot? The answer: because you must have played it once.

After all, everyone has done that, so you, my friend, can’t lag.

You have to be able to talk about it, and you have to know what kind of slot it is.

You might best compare this (incomprehensible) feeling with the painting The Mona Lisa by Leonardo da Vinci. The world’s most famous painting is in the Louvre museum in Paris. You must have seen that painting, even though it is only 77cm high!

Do you get rich by playing with Starburst? No, never! Then why play? Simply because you must have played it once.

The maximum win at Starburst is 500x the bet

I guess I have already revealed a lot, but below I provide you with some valuable details, my friend! 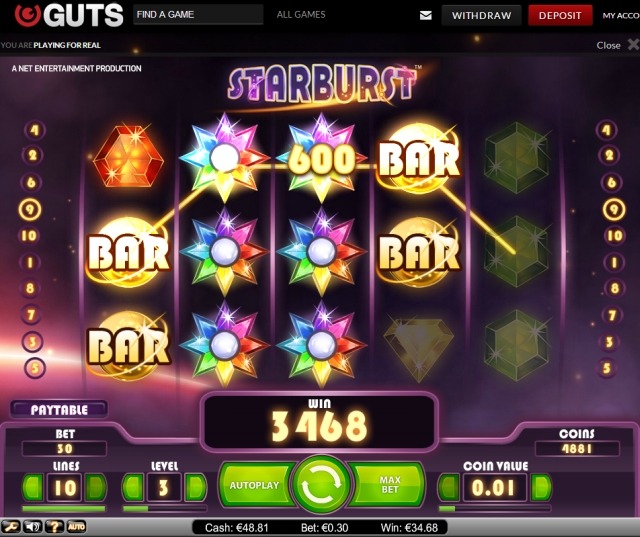 The game has 5 reels with 3 rows of symbols, and there are ten paylines. You can win both ways (from left to right and right to left).

The two most lucrative symbols are the Bars and the Sevens. Furthermore, you have five different gems.

If you manage to spin a reel with all Wild symbols, you receive one free re-spin with all wilds sticky.

The feature can be re-triggered up to 2 times.

It’s not necessary to get very excited about it, my friend. The re-spins hit quite often.

Starburst doesn’t have a free spins bonus round.

Starburst’s theoretical RTP is, certainly, for Netent terms, not so great: 96.09%.

According to Netent, Starburst has a low variance.

This slot was made for players who want to play for a long time with a few tenners. And that’s possible with Starburst.

Regarding the prizes’ size, Starburst is best compared to slots like Blood Suckers or Jack Hammer. 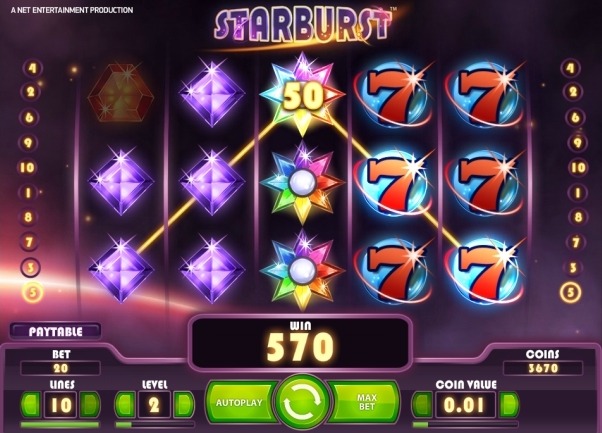 Starburst slot – who will like the slot? And who won’t?

Starburst is a slot for players who want to enjoy simple gameplay on a classic slot that won’t break the bank too much.

Does this slot appeal to you? Then, my friend, I can recommend this slot’s successor: Berryburst.

One of the best Starburst tips is always to find the casino that offers you the best no deposit free spins offer.

This way, you will have a great way to get started with a fantastic bankroll bonus that you can turn into even better wins.