Besides the fact that the titles by Viking Clash all have unique bonus features and nicely fleshed-out themes, they are a lot of fun to play. And perhaps, the most important thing of all is that you can earn considerable money on them. The maximum you can win on Viking Clash is an astronomical 13,200 x the total bet.

Push Gaming has released a string of superb slots in 2018, including Viking Clash.

Viking Clash is the release of August 2018, and it joins the ranks of seriously insane slots like Wild Swarm, Fat Rabbit and Blaze of Ra.

Even with the minimum bet, you are talking about an amount that exceeds $€ 3,000.

How does the Viking Clash slot work?

This video slot is played on two sets of 5 reels with three rows of symbols.

On the sets are two rival Viking families that make life miserable for one another by utilizing various weapons.

On each set, you play with 25 fixed paylines.

Viking Clash’s payout rate is 96.67%, and the variance lies somewhere between medium and high.

The premium symbols consist of the rugged members of the Viking clans.

These pay anywhere between 10 x and 16 x the total bet.

The weapons are the medium symbols.

The so-called low-paying symbols (the stones with the Rune signs) award 1.2 x the bet if you get 5-of-a-kind.

All symbols are stacked. So, often it becomes a matter of many winning combinations or (almost) nothing.

The Wild Ship Feature is a mini-feature that is activated at random times.

Some wild ships sail across the screen from right to left, and (hopefully) they deliver some nice payouts.

As soon as they disappear from the screen, the feature is over, and the total winnings are totted up. 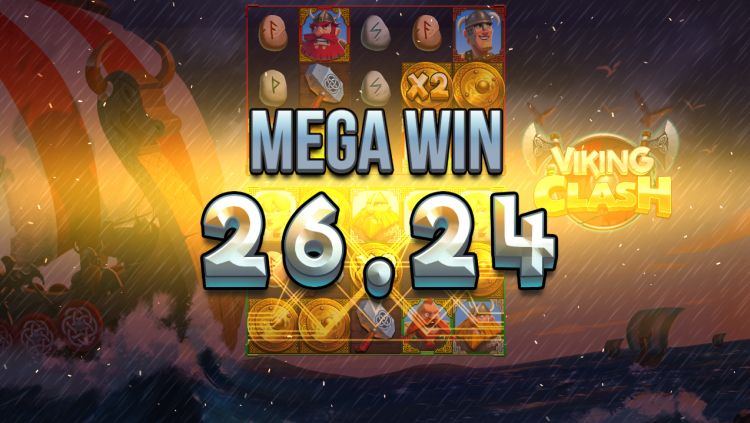 The Viking Battle is what it is all about in Viking Clash.

This unique and nerve-wracking free spin bonus is hard to trigger, but the potential gains are, well, enormous.

The bonus is activated if you manage to spin 3 or more scatters.

These scatters consist of giant catapults on the top set of reels and cannons on the bottom set.

You always start with 6 spins, which can earn you extra sticky wilds and extra free spins.

This is how that works: every scatters that you spin during the free spin bonus will result in the following:

So, the more scatters you manage to spin, the more sticky wilds, multipliers and extra free spins you will earn.

With a bit of luck, every single spin can end up paying out handsomely.

And that is when your ship, loaded with money, comes in.

Sit back, relax and enjoy.

Gambling at an online casino does not get better than this. 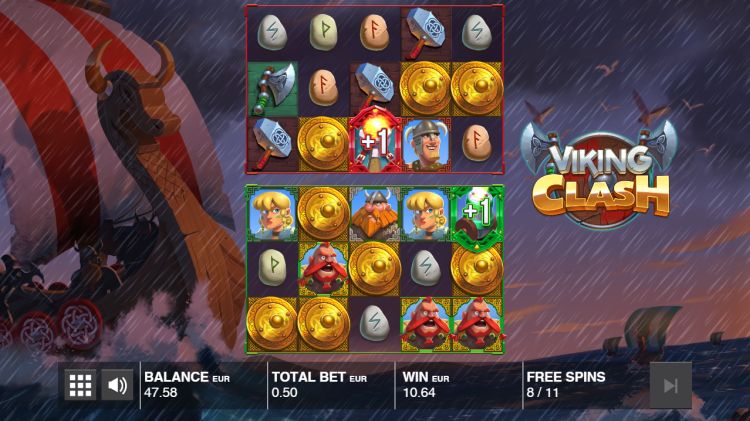 Our verdict on the Viking Clash video slot?

Viking Clash is a super fun online slot by Push Gaming, but a slightly tricky one.

The high variance is the reason that this slot is very unpredictable.

And sometimes, it takes a very long time before you win the bonus feature, and even then, it can turn into a disappointment.

But other times, you are on the right side of the variance, and you get your grubby little hands on a massive bonus round quickly.

Just make sure you have enough of a starting balance when you are going to play Viking Clash with real money and start with relatively small wagers.