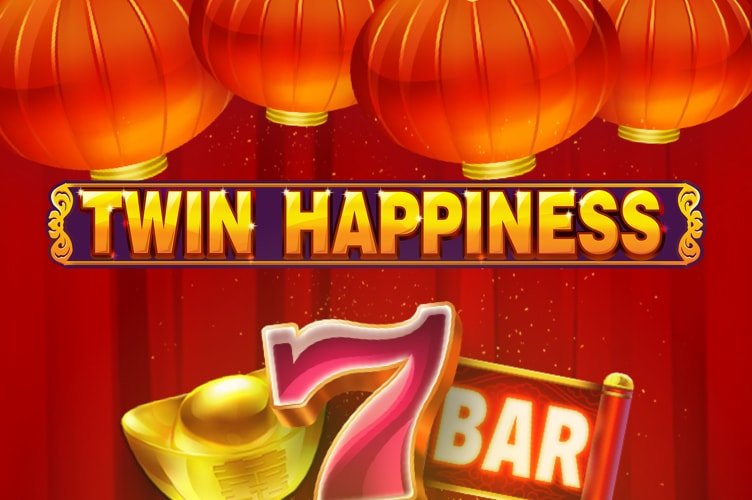 However, they won’t score points with slots like Starburst, Gonzo’s Quest or Narcos. Instead, they have opted to give their best and most popular slots an Asian makeover to see if they can conquer this colossal market.

NetEnt has big plans to expand in China

So far, Netent has launched Imperial Riches (A Cosmic Fortune clone), Sweety Honey Fruity (A Fruit Shop clone) and Happy Panda (a carbon copy of Divine Fortune). Twin Happiness is another slot with a Chinese theme.

Twin Happiness has taken the Lights slot’s visual style and combined with the gameplay of Twin Spin – including the famous “Linked Reels” feature.

Those few who have not seen it before: each spin has at least two and up to five identical reels. Which is why these reels are called “twins.” It means that the symbols will be precisely the same, in the same order.

It is indeed a straightforward mechanism, but also very useful when you consider there are also 243 ways to win. It makes every spin much more exciting, in particular, if 3, 4, or even 5 reels are identical!

Imagine having four or even five consecutive identical stacked reels for those extra juicy wins. 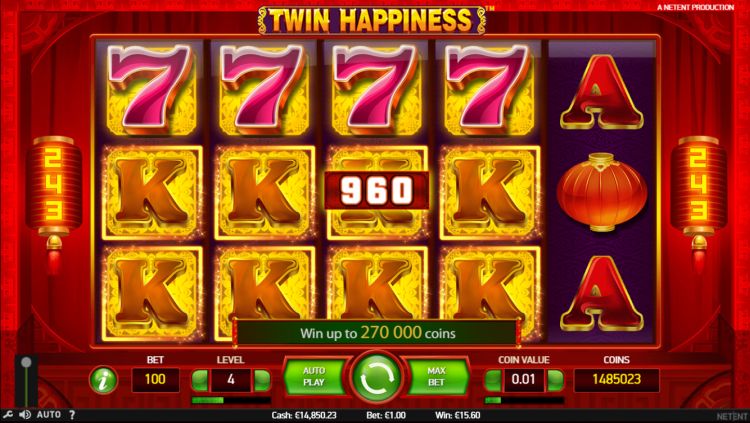 Gameplay and features of Twin Happiness

Twin Happiness has no paylines but the ‘243 ways to win’ mechanism. You win if you have at least one identical symbol on the first three, the first four or all five reels.

That fits perfectly with the “Twin Reel Feature” of Twin Happiness, of course.

Theoretical RTP (payout rate) 96.55%, which is better than the RTP of an average online slot.

Based on our extensive study of the Twin Spin slot, we expect you to win a prize in the range of 250x to 500x the total bet once every 10,000 spins.

If you get a prize close to the maximum prize of 1,080x the total bet, it will be miraculous.

We expect that prizes topping 500x the total bet are awarded once every 200,000 spins. 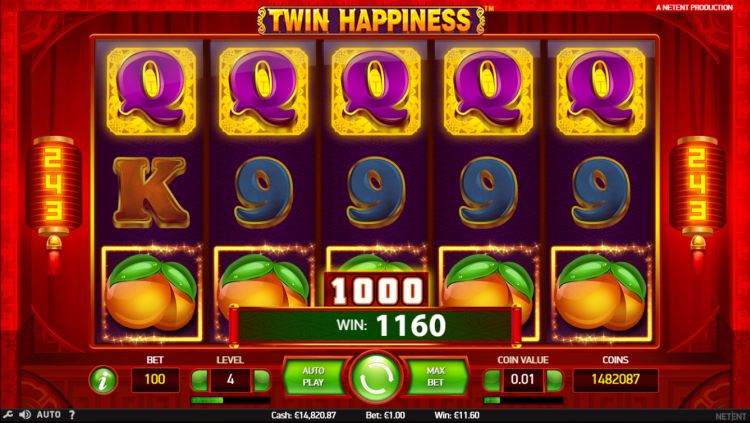 Symbols and payouts – Chinese symbols are the premium symbols

There are six playing cards, five premium symbols and one Wild (the yellow/orange Chinese letters), which can replace all symbols.

The five premium symbols are a golden Chinese hat, a Seven, a red lantern, the BAR and the pair of oranges.

Netent chose oranges, as this fruit originates from China. The lower paying symbols are the six playing cards.

The golden Chinese hat is the most lucrative symbol. Get 5 of these on the 5 reels, and you get paid out 40x the bet.

If you play a combination with more than one symbol on at least one of the reels, your wins can grow exponentially.

This feature is there for every spin. Each spin is a minimum of two reels, “Twin Reels.” On this reel, precisely the same symbols appear in the same order.

The minimum number of Twin Reels you get is two for each spin. If you are lucky, though, it could also be three, four or even all five.

Our verdict on the Twin Happiness slot

Twin Spin is one of the most popular NetEnt slots.

It looks like NetEnt weren’t confident enough that the simple fruit theme would appeal to Chinese gamblers.

As far as gameplay goes, everything else has been kept the same. That means a great payout percentage of 96.55% and a unique “Twin Reel feature” that can turn any spin into a big winner.