On the one hand, they release slots with beautiful visuals and lots of bonus features like Rambo and Dragons and Magic. At the other end of the spectrum, they are successfully releasing online versions of famous fruit slot machines.

And then there’s the cross between the two extremes: the Megaways version of the fruit slot machine.

Perfect for the player who firstly has nostalgic feelings for slots like the Random Runner and Club 2000 and secondly loves modern Megaways slots. 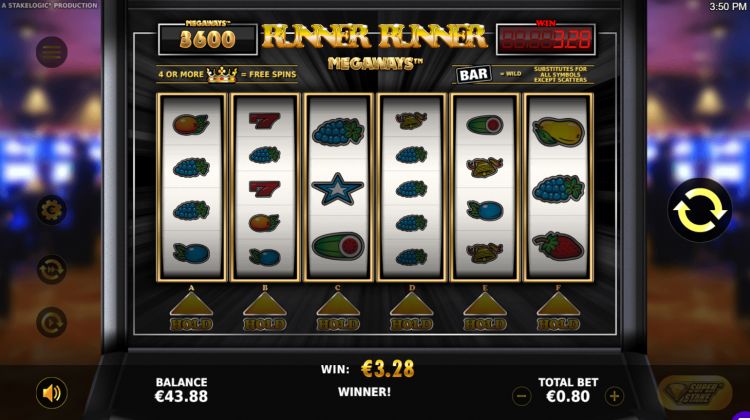 All the familiar symbols are present, and that only adds charm to the fun of playing.

Betting starts at 20 cents per spin, up to a maximum of $€ 40 per spin. A typical Stakelogic idea is the Super Stake option. You double the total bet, and you get extra features in return, allowing you to win more.

In Runner Runner Megaways, that extra feature is a wild symbol (the BAR symbol), which replaces all other symbols. Great for hitting those massive scores.

The theoretical payout rate is 95.99%, which is just about acceptable, but there are higher paying Megaways slots – many!

During Stakelogic’s many millions of test spins on this slot, the maximum profit was found to be around 11,000 x the total bet. 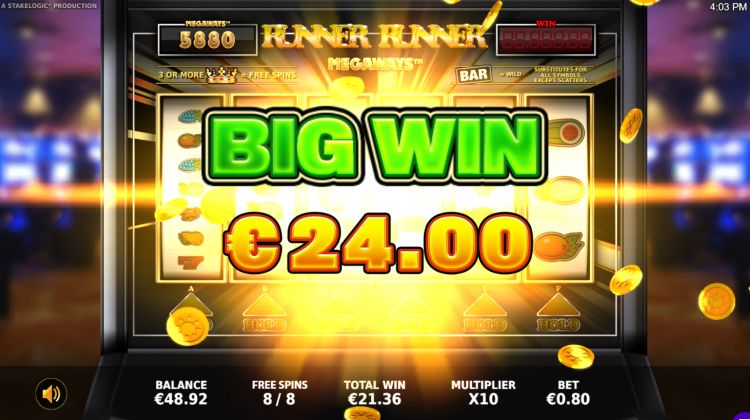 The blue-white star is the highest returning symbol and awards you 12 x the total bet for a 6-of-a-kind.

Other high-value symbols are the red sevens, the melons, the strawberries, the bells and the grapes. We can dream about them; that delicious. These are worth between 0.50 x and 3 x the total bet in six of the same symbols.

The “low” fruit consists of lemons, plums, oranges and cherries. These are worth considerably less, between 0.32 x and 0.40 x the bet for every six of the same. 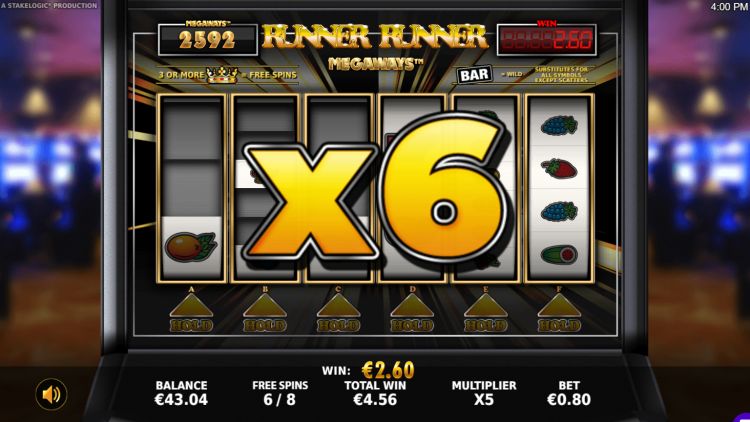 You need at least four gold crowns to activate the free spins bonus. As soon as you spin three or more, they will be held in place, and you will get a free respin to try to spin more. As soon as you don’t spin any more crowns, the respin feature stops.

You get 8 free spins in return for four scatters and +5 free spins for each additional scatter.

During the free spins, a progressive multiplier is active, which is increased by +1 after each winning combination.

It is possible to retrigger, and you only need 3 scatters for that. These will award you 5 extra free spins plus +5 free spins for each additional scatter.

The Hold and Respin feature is also active during the free spins: from two scatters and upward, the reels are held again, and you can try to spin more scatters. 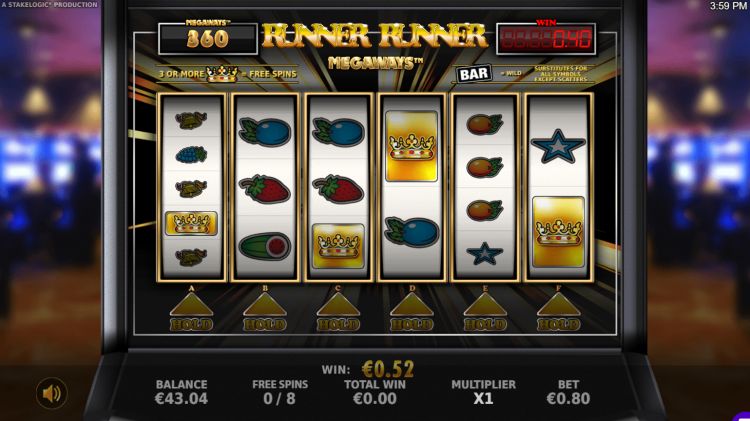 Our verdict on Runner Runner Megaways

With the Runner Runner Megaways game, Stakelogic proves that a Megaways slot doesn’t have to be that complicated at all.

The simple gameplay combined with the powerful mathematical Megaways model works like clockwork.

The game is fast, doesn’t get boring quickly and can generate desirable payouts.

The Super Stake option is also a great feature: it elevates the gameplay, and that extra wild can make or break your result.

A top-notch slot, on which we will play for many hours to come.