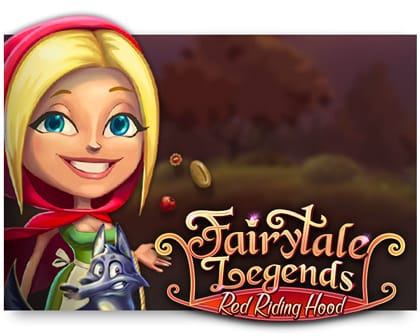 The October 2016 release by Net Entertainment is named Red Riding Hood and is based on the well-known tale of Little Red Riding Hood, who goes to visit her grandma in the dark, eerie forest. She has every reason to be a little scared, as the big bad wolf is lurking behind the tree, with every intent to devour both our little heroine and her sweet grandmother.

Good examples are Netent’s Jack and the Beanstalk and Quickspin’s Big Bad Wolf.

It seems Netent has plans to release a whole series of fairy tale based slots, hence the name Fairytale Legends: Red Riding Hood. We quite like this idea – fairytales have recognizable characters and often dark and surprising storylines.

Visually, Red Riding Hood looks excellent, with an everchanging background and a walking Red Riding Hood. This creates an effect where the background of the slot appears to be perpetually changing. The overall theming is a lot brighter and cheerful than the actual fairytale.

The big bad wolf only shows up in one of the bonuses, and Red Riding Hood gets frequent help from a good fairy.

Variance and Return to Player

The variance of the Red Riding Hood slot is on the lower side of medium, and the return to player percentage is a healthy 96.33%. 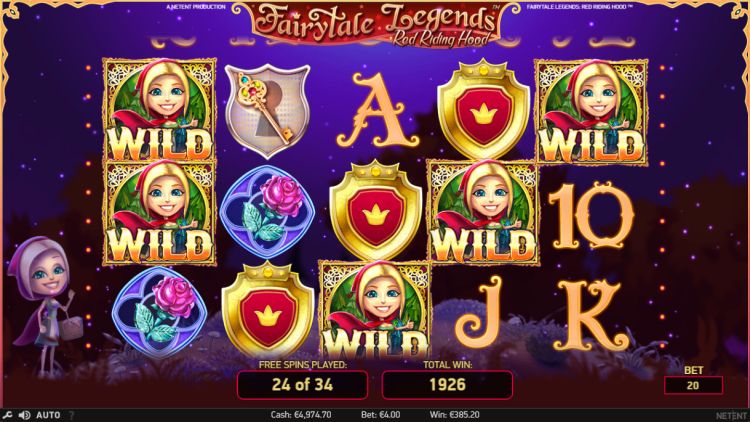 Similar to other 2016 Netent slot releases (Jimi Hendrix, Guns N’ Roses, Theme Park), Red Riding Hood is packed to the brim with bonus features – six in all. Three of these are mini-features, and there are three main bonus features.

The good fairy is activated at random and helps you acquire some extra credits from time to time.

She will award you with a cluster of 5 to 9 medium symbols during the Fairy Magic Spin.

The best mini-feature with the highest potential is the Fairy Wild feature, where 3 or 4 wilds will appear on reels 2, 3 and 4. On top of that, the sticky wild feature will start: you get one free respin and will earn extra respins as long as new wild symbols appear on the screen. 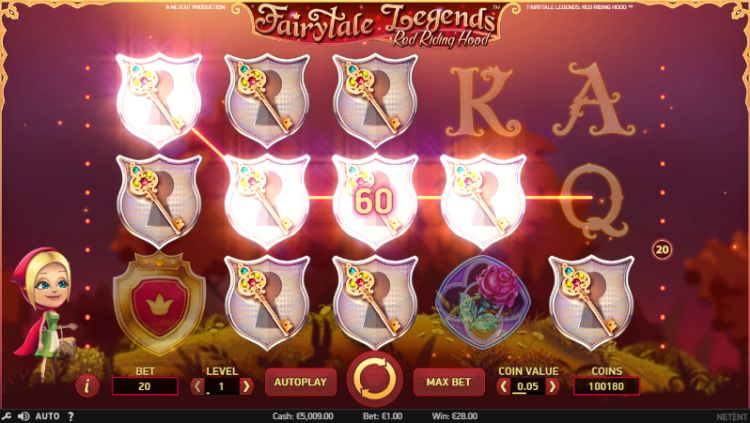 The least desirable bonus of the three. You will be awarded 15 times your total stake. Boring!

You are awarded 10 free spins. For every treasure chest that appears on the screen, you will get 2 extra free spins. Get three treasure chests, and you will retrigger for 10 spins. The sticky wild feature is also active during this bonus, which can very hit-or-miss. We have won anywhere between 2x and 130x our stake.

The Beware the Wolf bonus

Without a doubt, the best bonus of the bunch. Red Riding Hood is taken to a new screen where she needs to advance by throwing dice. Along the way, she can pick up credits, multipliers or the dreaded cross. The first two will grow your winnings; the last one will end the bonus. The further Red Riding Hood advances on the board, the bigger the prizes.

Should you make it to the end, you will win 200x your stake plus all the credits you picked up along the way: a fun and exciting bonus feature. 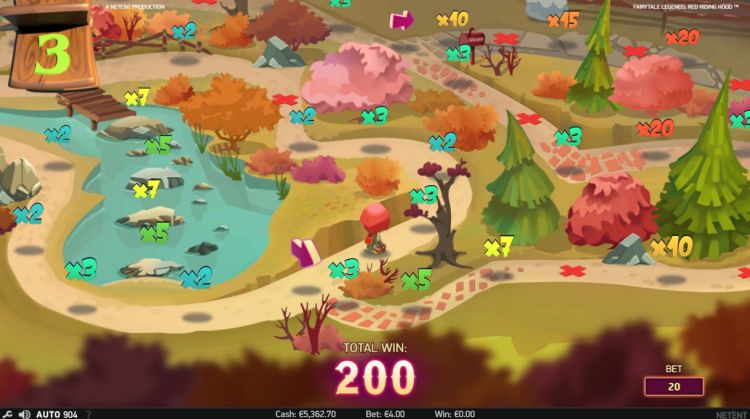 We quite like the Red Riding Hood slot, though it is no more than a solid release. Graphically it is very well done, but we can’t help but feel Netent could have done more with the storyline. The Big Bad Wolf only makes an appearance in one of the bonus features, and the grandmother is nowhere to be found. What the good fairy has to do with Red Riding Hood, we will never know.

The bonus features (except for the Coin Win bonus) are a lot of fun but kind of miss the enormous winning potential.