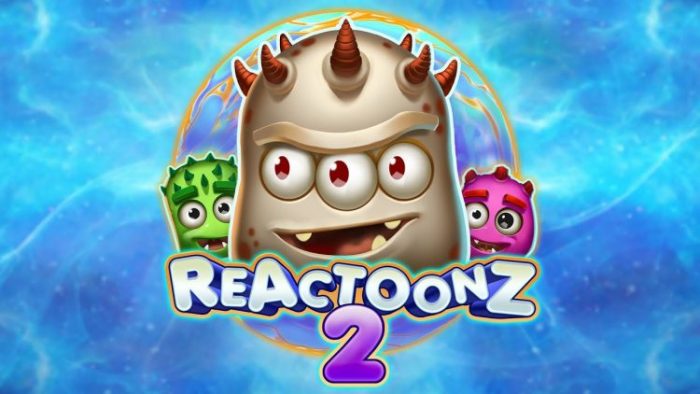 In short, my expectations were more than high, when I found out that Reactoonz 2 would be released. The critical question: is this an improvement on the first version? My answer in four words: I’m moderately positive.

Reactoonz 2: an excellent sequel to the immensely popular Reactoonz slot

Reactoonz was released in late 2017 and is undoubtedly one of the most popular Play’n GO slots.  It also marked the beginning of the grid slots era.

It was only a matter of time before a sequel would be released.

In the meantime, Play’n GO released many new and even better grid slots, including Gold Volcano, Honey Rush and Diamond Vortex, to name a few. Play’n GO is now, and rightfully so, the grid slot specialist.

First of all, the maximum win is limited to just over 5,000x the bet

Now, a 5,000 x the bet win is nothing to be sneezed at, but it is not much of an improvement over the original.

It’s a missed opportunity, as far as I’m concerned.

Casino Hipster verdict: In terms of gameplay, it’s an excellent successor to Reactoonz. But the mathematical model is somewhat disappointing. 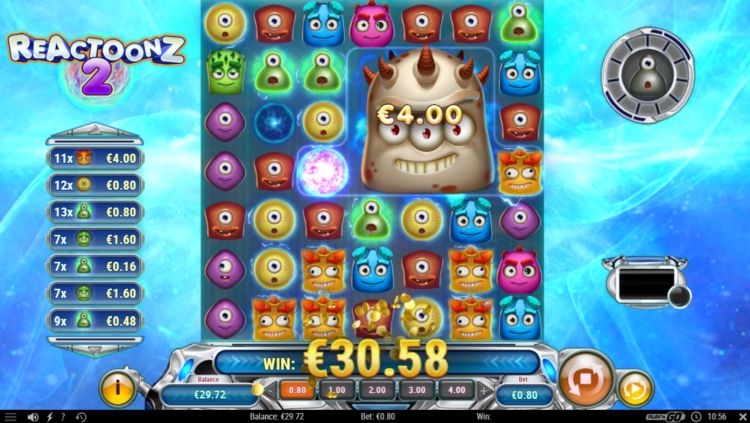 It’s a Cluster Pays slot (grid slot) with a playing field of 7×7. So there is room for 49 symbols.

There are eight symbols: four one-eyed and four two-eyed space creatures. The creatures with two eyes are the high-paying symbols, and with one eye are the low-paying symbols.

You get a winning combo if you spin a cluster of at least five equal and adjacent symbols. As soon as you get a winning combo, you’re awarded a free re-spin in which winning symbols make way for new symbols, according to the Avalanche (Tumbling or Cascading) mechanism.

The Fluctometer and the Quantum Meter

You see the Fluctometer on the top right-hand side. You get to fill it when you make winning combos. As soon as the meter is full, it gets you 1 to 3 Electric Wilds.

The Electric Wilds replace all symbols and remove all intermediate symbols, so you get another free re-spin. But, besides, you also fill the other meter (the Quantum meter). 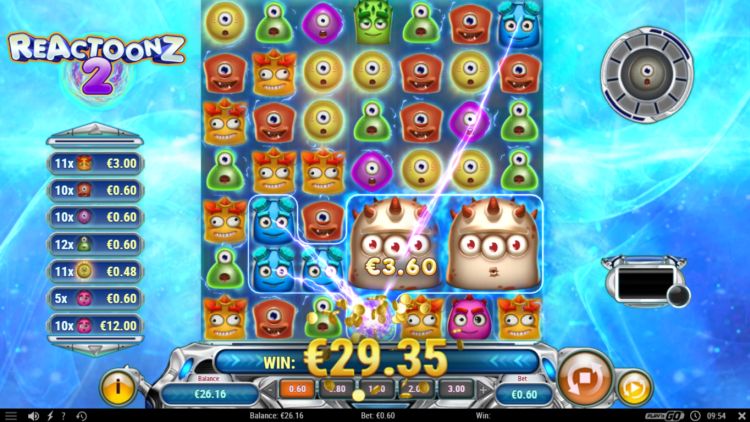 There is no free spins bonus round needed, thanks to the tremendous main game

Just like Reactoonz, you don’t have a free spins feature. But, to be honest, it would not make sense, given the enormous amount of fireworks and potential in the main game.

Reactoonz’s default payout percentage is 96.2%,  which is slightly lower than its predecessor (96.51%).

As with all Play’n GO slots, even the best online casinos, see an opportunity to make extra money by offering the same game at lower rates. Always check the game rules!

The variance of Reactoonz 2 is (according to Play’n GO ) “high.” It’s certainly not “very high” or “extremely high.”

A missed opportunity, as far as I’m concerned, as it adds little, compared to Reactoonz. 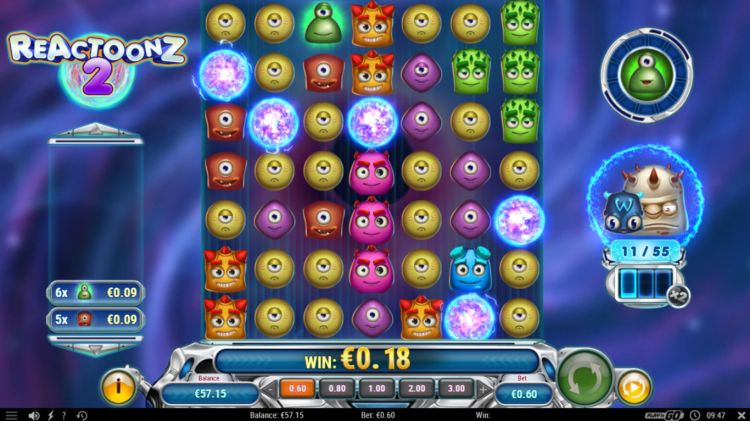 Players who love Reactoonz will have a go at this one. Players who don’t like grid slots will skip this slot.

Even though this slot is pretty volatile, I’d have preferred to see a more brutal slot. Now it feels like more of the same