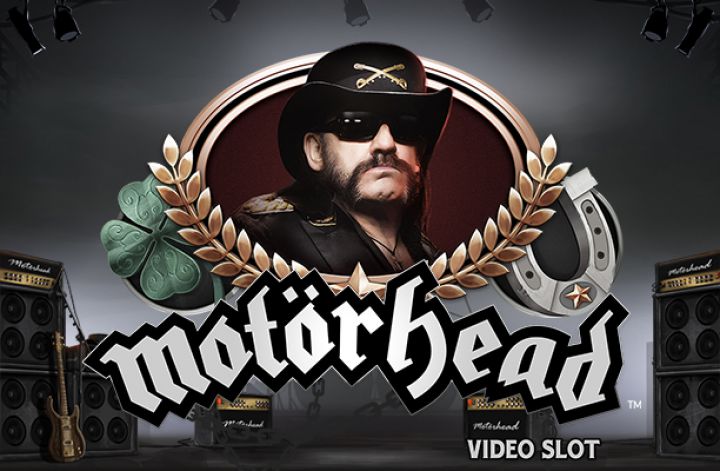 The first two releases of the brilliant Netent Rock concept were the extremely well-received Guns N’ Roses and Jimi Hendrix slots. And now Netent brings us Motörhead, a slot based on the tough rocking British band Motörhead, with its eccentric and rather cool frontman Lemmy Kilmister, who sadly passed away at the end of 2015.

“Good evening. We are Motörhead. And we play Rock and Roll.”

Lenny lived life in the fast lane and was a notorious user of both legal and not so legal substances besides being a hard-working rocker.

Of course, the first question we asked ourselves when reviewing the Motörhead slot was: is it as good as the first two instalments of the Netent Rocks series? The answer? No, not quite. But it does come very close. And Lemmy gets this slot some extra marks, just for being the cool cat that he was.

Motörhead offers slot players an incredibly high return to player percentage of 96.98%, several mystery features, 76 win lines and a free spins bonus. Add a rocking and a booming soundtrack to the mix, and Netent has another winner on its hands. 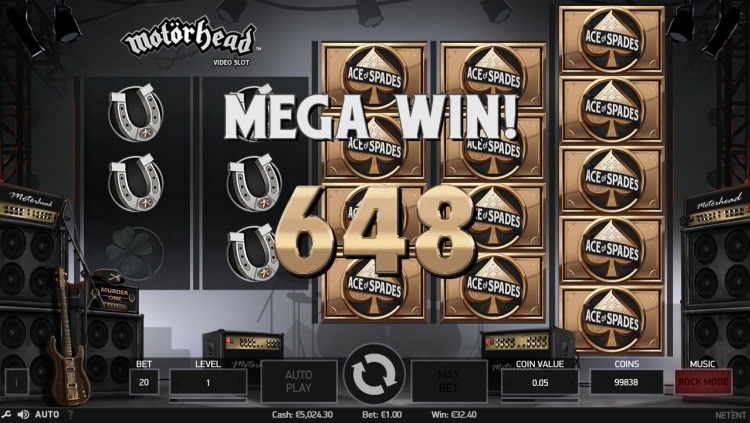 Motörhead has 76 fixed win lines and a reel setup that reminds us of Netent’s Dazzle Me slot: 3 x 3 x 4 x 4 x 5 reels. The gameplay is also somewhat similar to Dazzle Me’s mechanism. That is, Dazzle Me on speed.

The symbols used in Motörhead are a lot like the band itself – straight and to the point. There is Lemmy’s iconic image as the highest paying symbol. There is also the Ace of Spades logo, which is the wild symbol. We also see clovers, horseshoes and cherries.

Graphically, this slot does not disappoint.

There is a live stage at the backdrop of the reels, and players are treated to several cool live show clips and light effects before and during the game.

Motörhead has a low to medium variance and a high RTP of nearly 97%, making it the ideal slot to use for meeting playthrough requirements of a welcome bonus. 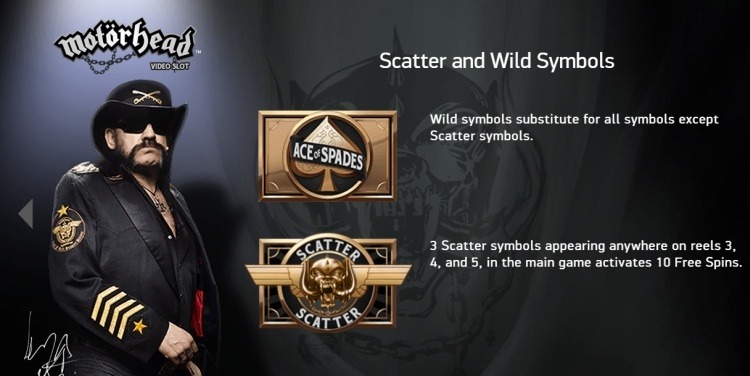 The golden Motörhead logo plays a particular part in the gameplay. This symbol is super stacked and will show up in every spin – on at least one reel and up to five reels. With a mighty roar, the symbol changes into any other symbols, including the wild symbol. Its super-stacked nature gives it the potential to result in super big wins.

Three scattered Free Spins symbols on reels 3, 4 and 5 activate the free spins bonus. You will win 10 free spins, which is always nice. However, there are no extra multipliers, extra wilds or other boosters during the free spins. One of the few things that we think could have been executed better.

The Bomber Feature is our favourite bonus feature of this slot. It has a low hit frequency, but when it hits, things can explode. Before the symbols fall on the reels, the Bomber Feature gets activated at random. You will get a minimum of 10 and a maximum of 15 Bomber symbols scattered on the reels.

These symbols will turn into mystery symbols that will be revealed at the end of the spin. You will be rooting for the slot to show either the Wild Symbol or the Lemmy Symbol for big wins.

We love this fascinating Bomber feature – the tension builds up while you have to wait and see how many Bomber symbols you get, where they are placed on the reels and what Mystery symbol lies beneath the Bomber symbols. We will even go so far as to say that this feature pushes the Motörhead slot from good to great. Sometimes one single gameplay feature can do that. 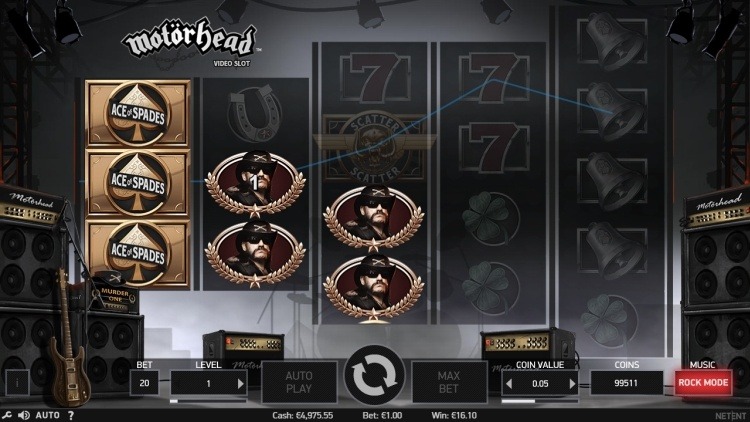 Of course, we need to talk about the soundtrack. It is phenomenal. Four of Motörhead’s greatest and heaviest hits can be heard in the background: Overkill, Killed by Death, Iron Fist and the crowd favourite Ace of Spades.

Should all this get a little bit too overwhelming, there is an option to turn off the music by turning off the “Rock Mode”. But to be honest, we think that this is something that is not done. We are talking about Lemmy, after all. The one and only Lemmy.

Our verdict: what do we think of the Motörhead slot?

Netent has released yet another winner with the Motörhead slot.

It comes chock full of great features, a headbanging soundtrack and some very cool graphics — no time for mucking about, rock and roll all the way.