Mermaids Millions has simple and straightforward gameplay with dated graphics in high resolution so that the classic style can pass as intentional. The graphics are not bad for such an old release and include some simple animations, too. There are five low-paying symbols in the game and three high-paying: Seahorse, Pearl Clam and Treasure Chest. Additionally, Poseidon is the Wild symbol, and it pays more than any other symbol itself, 7500 coins for five-of-a-kind, compared to 500 for Treasure Chest and Pearl Clam.

The exciting part of Mermaids Millions and why people still play this slot game fanatically are the two Bonus symbols that trigger two different bonus rounds.

Three, four or five Mermaids trigger 10 free spins where all wins are tripled, and Scatter wins are multiplied by the total number of credits staked, so that’s an added bonus right there.

Treasure bonus: up to 166 x your total bet

Three, four or five Treasure Bonus symbols on an active pay line trigger the Treasure Bonus game, where you’ll get to pick three of twelve treasure chests that hide cash prizes up to 2500 coins or 166x your total bet.

RTP and variance of Mermaids Millions

The theoretical return to player (RTP) of this low to medium variance slot is 96.56%, which is plenty for a classic slot game, and it’s no wonder many fans turn to Mermaids Millions when they want to play a classic slot. Most of the game rewards are here in plain sight and aren’t hidden behind some unreachable jackpot or bonus either.

Everything you win, you win during the base game, and these two bonus features get triggered often. The Free Spins Bonus is the better of the two, as all wins are tripled, and this is your goal in this game, to reach the free spins game early and as often as possible. 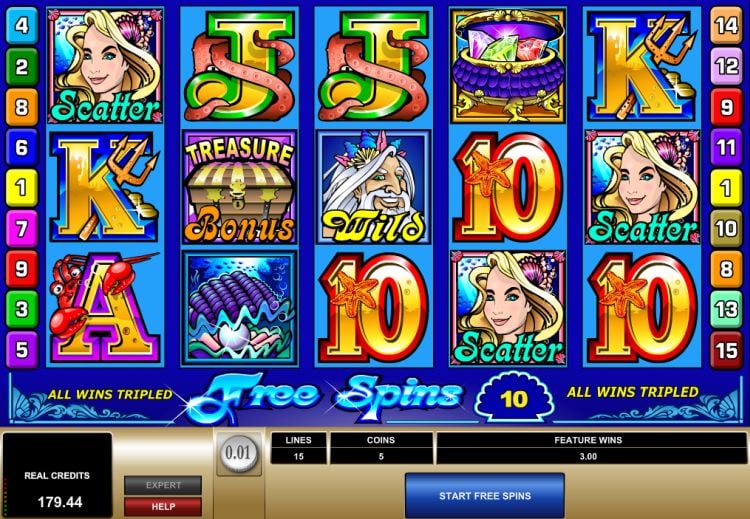 Our verdict: a timeless classic!

This classic slot has easily stood the test of time and remains one of Microgaming’s most played slots to this day. It’s a low to medium variance game, so paired with solid RTP, it’s not a bad game for meeting the bonus’s playthrough requirements.

The game won’t be paying much, and big wins aren’t really possible here, but it will regularly be paying, and you’ll be entering the bonus rounds often.

For a classic slot, there’s really not much more you can ask for.