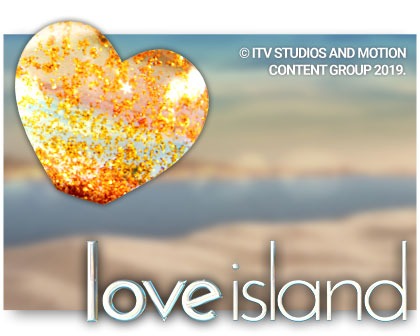 A kind of Temptation Island, but then much more innocent, with less vulgar types, a lower level of silicone and pumped up lips and fewer wardrobes.

Unfortunately, Love Island is also much more boring than Temptation Island, and it did not turn out to be the success in viewing figures the makers had hoped for.

Nevertheless, Microgaming released an online slot based on the Love Island TV show.

Entirely in Microgaming style, it is a clone of an existing video slot of theirs, Dream Dates. It’s not exactly their most exciting video slot. In that respect, the slot fits the TV series theme perfectly.

The love theme is not fully developed at all, the graphics are downright dull, and the game’s course is predictable.

Guess what we think of Love Island? 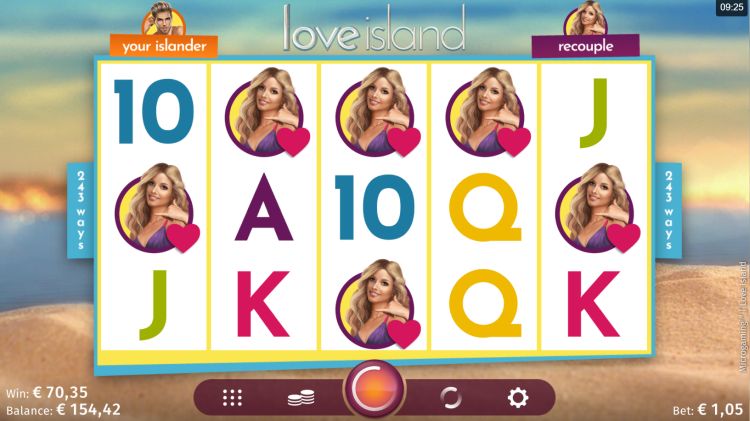 How does the Love Island slot work?

Love Island has 5 reels with 3 rows of symbols and 243 ways to win.

This win all ways set-up is also typical for Microgaming: they made the win all ways genre famous with slots like Immortal Romance, The Terminator 2 and Jurrasic Park. There is a big difference between these classic slots and Love Island: those slots were original, cool and entertaining.

At the beginning of the game, you can choose a man and a woman as a dream date, who are supposed to fall in love with each other during the game. You can also leave the choice up to the slot. Anyway, it doesn’t make any difference to your chances of winning.

Graphically, the game is a very dull affair, no way you get the feeling of being on a sunny island. Rather in a hospital. Do you think it’s strange romance barely gets going?

The theoretical payout rate of Love Island is 96.39%. That is quite acceptable.

The slot has a medium variance, and in theory, it is possible to win $€ 125,000 as long as the maximum bet is active. 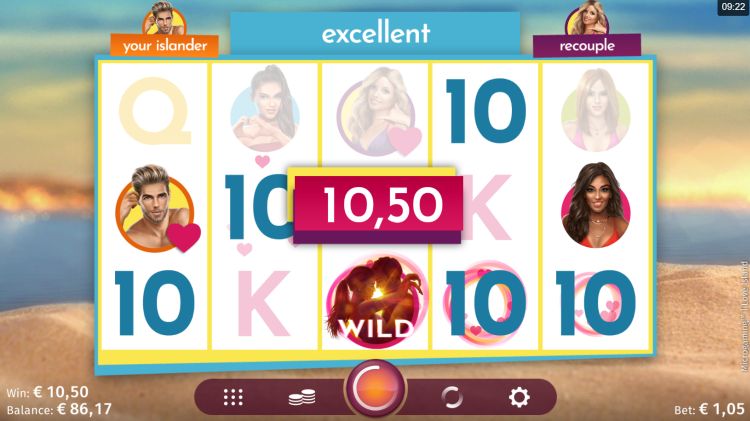 The wild symbol replaces all other symbols and is also the highest-value symbol. If you spin 5 of them, then you’ll earn 26.67 x your bet.

The character of your choice and your dream date also pay out nicely: they are both good for 13.33 x the bet if you manage to spin 5 of the same symbols. You can recognize your date by the heart at the bottom of the symbol.

There are also three other characters (men or women, depending on your initial choice) and card symbols.

As soon as your character appears in the middle position of reel 1 and his/her dream date on the central position of reel 5, you win a cash prize + 10 free spins. These two special places on the reels are called the Hot Zone.

If you don’t see a character other than your desired date on reel 5, you only win the cash prize (up to 20 x the total bet). Our verdict on the Love Island video slot?

Microgaming could have done something fun with the Love Island theme, but they didn’t really bother.

Apparently, they think it’s enough to rely on the brand of the TV series.

Too bad, but it also underlines the current free-fall of Microgaming’s market success. The once so powerful game developer used to guarantee fireworks, but now they’re just known for the tasteless, rehashed games that passed their expiring date.