The slot is set in a secret laboratory, where all sorts of experiments are going on with potions and strange creatures. As a player, you aim to make as many winning combinations as possible. To help you achieve this, there are unusual frogs, which are wild and can change colour.

Frog Grog is a Thunderkick slot. They are known for their fresh and unconventional slot concepts

What’s unique about Frog Grog is winning symbols disappearing and making way for new ones. Unlike Gonzo’s Quest, symbols don’t drop but stay in place. It takes some getting used to, but once you’ve figured out the mechanism, you can concentrate on what’s most important: netting cash.

With a maximum multiplier of 7 x and the occasional multiple wilds, Frog Grog can earn you great payouts. There’s also a Mystery Game feature, which is triggered randomly after a non-winning spin.

What is the payout rate of Frog Grog?

The Frog Grog slot has an excellent payout rate of 96.1%. Still, there are Thunderkick slots with a higher payout rate.

The variance is medium. Because of the maximum multiplier of 7 x and the extra wilds, chances are you can grab yourself a decent payout. 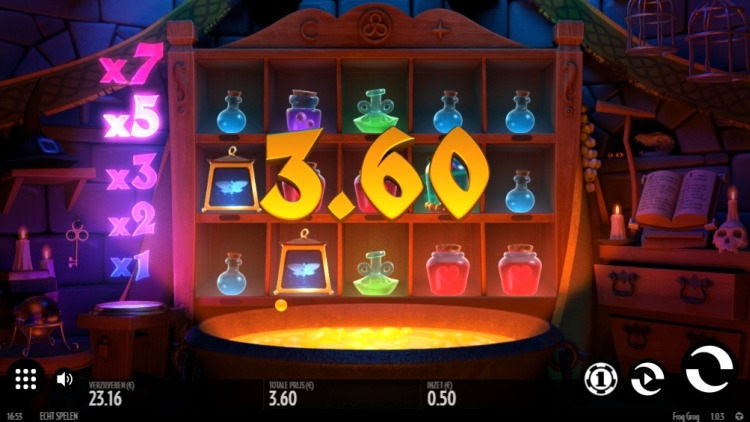 How does the Frog Grog slot work?

The symbols are spread across wooden shelves and consist of 5 reels and 3 rows. The number of 23 paylines is fixed. You pay a set amount per spin, which starts with a very reasonable $€ 0.10 and goes up to $€ 100. Symbols include potions, flowers, fluttering moths, eggs and a heart. The flowers and moths are the highest-value symbols.

The most important role, however, is reserved for the frog. The frog is wild and stays in its position for at least one spin. Furthermore, it blows the horizontal and vertical symbols off its reel with a big burb, making room for new symbols. Those can be super helpful because sometimes you risk getting “stuck” with the other symbols.

The frog is orange when it burbs away the symbols with its fiery belch. It turns blue and stays put until it is part of a winning combination and as long as there is a payout. No worries, it’s less complicated than it sounds.

With every winning spin, the multiplier increases: from 1 x, 2 x, 3 x, 5 x up to a maximum of 7 x. If you manage to spin some Wild Frogs with a 5 x or 7 x multiplier, then you might very well be swimming in cash before you know it. 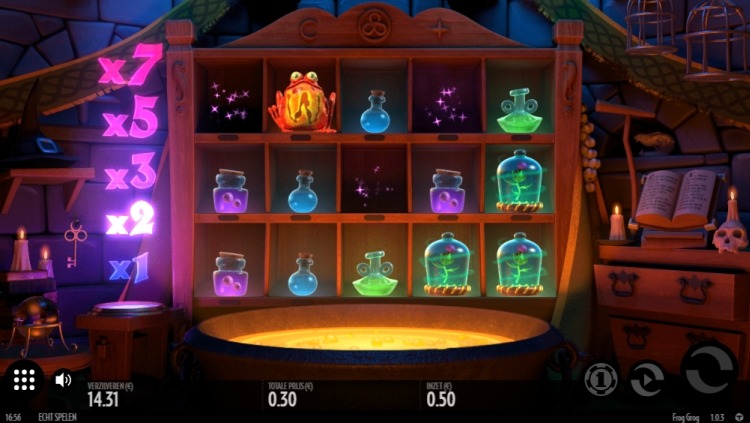 The Frog Grog bonus game starts randomly after an unsuccessful spin. First, all low symbols disappear from the game, awarding you cash prizes and increased multipliers in the process.

The two highest-value symbols (the moths and the flowers) will remain on the screen, which sets off a new spin. Hit one or more winning combinations, and a high multiplier immediately increases every win.

Our verdict on the Frog Grog video slot

Thunderkick again, as we come to expect, developed a slot that is fresh & fruity and a tad(pole) out of the ordinary.

The twist with the disappearing winning symbols inspired us to bring our A-game to the table. It took a bit of figuring out, on the other hand, that also kept it interesting.

All in all, Thunderkick produced an entertaining video slot, although it may not be to everyone’s taste.