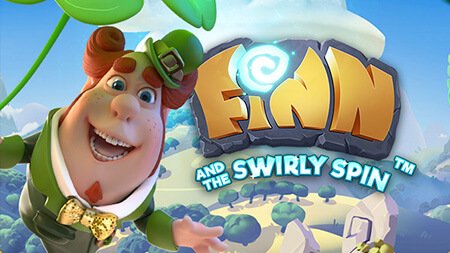 Like so many slots, it is based on the famous Irish Lucky Leprechaun theme. The cheerful green fellow with his flute and red hair is called Finn. Netent has done its best to conclude the year with something special. It turned out to be a very original slot, including a unique way to make winning combinations.

Instead of spinning reels, the reels now move through a kind of funnel, from the outside to the inside. When winning combinations happen, the symbols disappear and make room for new ones.

It’s similar to the effect you get by pulling the plug in the bathtub.

Netent calls this phenomenon ‘Spiral Reels,’ and we have to admit: Netent knows how to come up with something new, time and again.

The payout rate is 96.62%, and that’s A-okay, even though this slot doesn’t make it into our top 10 of best-paying slots. A payout rate of almost 97% is nothing to be ashamed of.

The variance of this Netent slot is low to medium, but it comes with a side note. A significant portion of the payouts come from the bonus features: big wins during the base game are scarce. 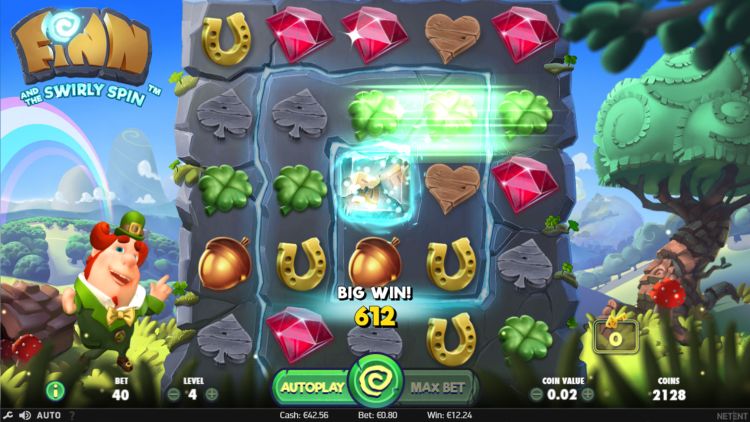 Finn and the Swirly Spin does not work with fixed paylines; it is a so-called Grid Slot, played on a 5 x 5 symbols matrix. The symbols move in so-called spiral reels, a kind of spiral-shaped line. If you have a winning horizontal or vertical line of 3 or more of the same symbols, you win a prize. The “loop” lines in which the symbols move are not taken into account here.

It may sound a bit complicated, and we guess you will certainly be puzzled for the first 10-20 turns. Even when you think you’ve got the hang of it, it may remain a bit confusing. 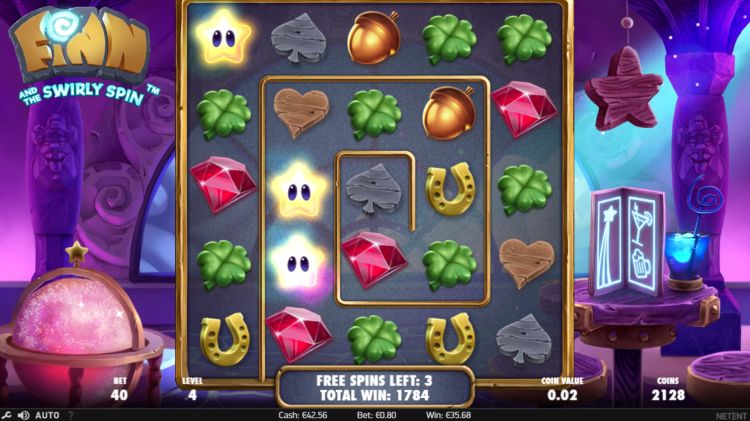 This slot comes with an Irish Lucky Leprechaun theme, so you guessed it: we will be flooded with Shamrocks/four-leaved clovers, diamonds, acorns and, of course, golden horseshoes. To complete this theme, the famous pot of gold makes its entrance as a special feature too.

The diamonds are the most valuable: 500 coins if you make a horizontal or vertical combination of 5 of the same symbols. The acorns, horseshoes and Shamrocks/four-leaved clovers reward you between 120 and 80 coins. Five identical card symbols (hearts, diamonds, clubs or spades) in a row are good for 40 coins.

The star is the wild symbol, and it replaces all other symbols except the key.

During the regular spins, Finn can call on extra features at any time. He then starts to mumble and do some magic, but his effort bears fruit. He conjures up four different “Spin Boosters” with promising names like Starfall Wilds, Dragon Destroy, Irish Luck and Magic Transform.

These “Spin Boosters” give you extra wilds, guaranteed payouts, premium symbols and more. The Starfall Wilds are the least lucrative boosters, and the Magic Transform is the most profitable. The other two are somewhere in between. 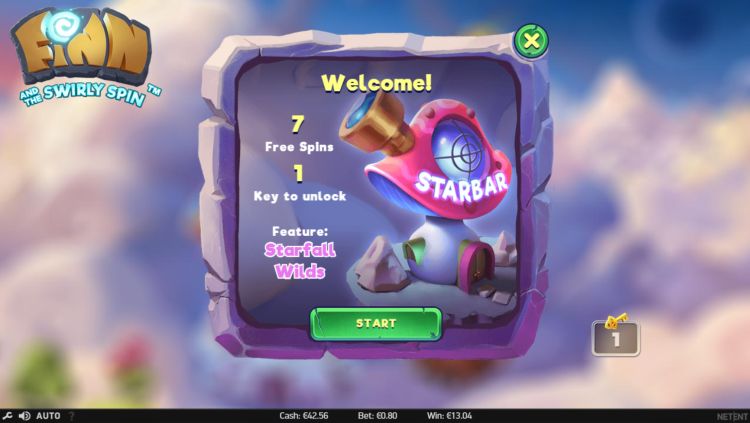 With this bonus, you get 7 free spins with a minimum of 2 extra wilds during each spin. This is the Starfall Wilds feature, which you can also win during the base game.

The Lava Lair Free Spins consist of 3 free spins during which the Dragon Destroy feature is active: several symbols are removed, and you always have at least one winning combination. To even help you more, you get an extra sticky wild and will replace the key.

The lucrative Lucky Mug Free Spins is unlocked after you have collected nine keys. But you will get a lot in return for your investment: 4 free spins with an active Irish Luck booster. During every turn, you are guaranteed a whole horizontal or vertical row full of the same symbols.

The Golden Pot Free Spins is the Finn and the Swirly Spin slot’s fourth and final feature. You only get two spins, but all hearts and spades are converted into a premium symbol. With a bit of luck, this results in astronomical profits. 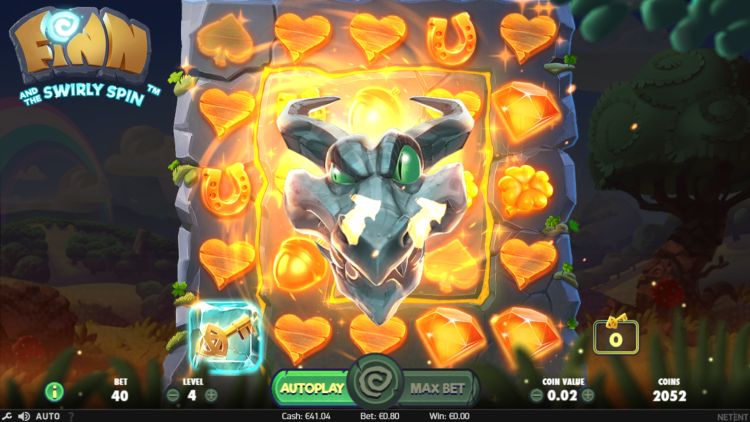 Our verdict on the Finn and the Swirly Spin slot

Netent has done it again: they have designed a unique video slot that cannot be compared to any other online slot. They deserve all the praise for that.

We enjoyed playing Finn and the Swirly Spin, although we have to admit it started to make us a bit dizzy after a while.

The keys collection feature is designed to keep you playing for as possible. While we understand the reasoning behind it, we suspect that few players will unlock enough keys to choose between all the bonus features.

At least we didn’t have the patience to do so. But then again, we are terribly impatient players.

In November 2019, Netent released a sequel to Finn and the Swirly Spin: Finn’s Golden Tavern.