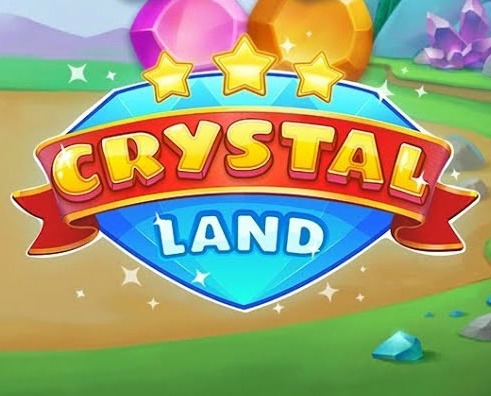 Crystal Land is an entertaining cluster pays slot by Playson, and we have been playing it for quite a bit by now

This online video slot can best be described as a slot crossed with a casual mobile game. It has Candy Crush elements, Bejeweled and Crystal Queen, and the whole thing is executed very beautifully.

The producer of Crystal Land, Playson, hasn’t released many titles, yet. What they do create, however, is of a very high level. It is no coincidence that many players think they are playing a Quickspin slot when it’s a slot developed by Playson.

This slot is colourful, diverse and entertaining, and it has a unique and fun main bonus feature. 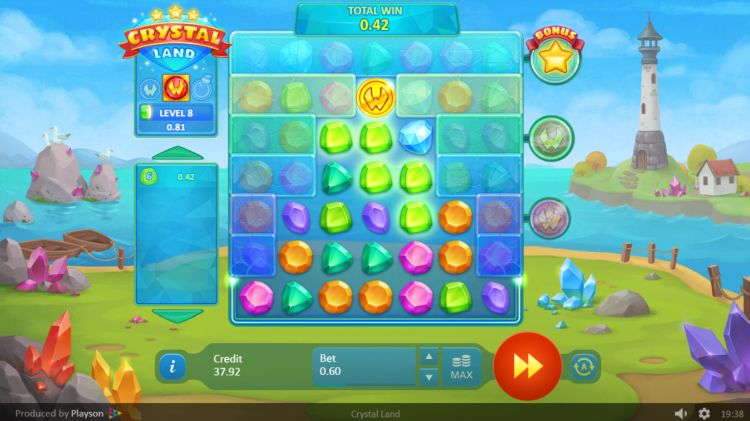 How does the Crystal Land slot work?

You play Crystal Land on a field of 7 x 7 symbols. A few symbols are freely visible, while others are hidden according to a fixed pattern. You free up these symbols as you gain more winning combinations.

With each winning combination, other symbols are revealed. Moreover, you can earn extras: 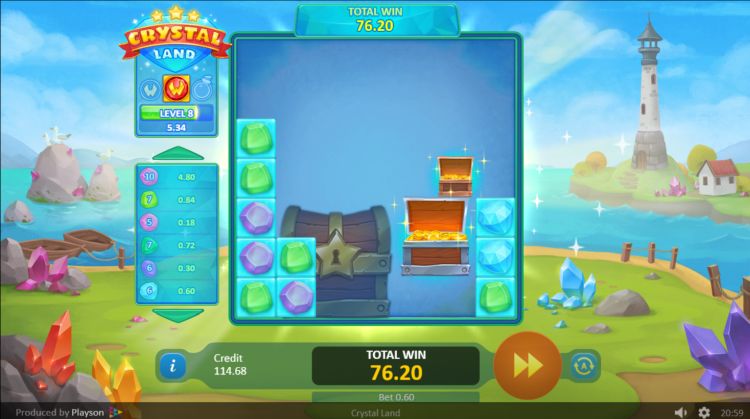 Extra features thanks to level ups

By reaching a level up, you unlock additional features.

These features can be activated randomly after any unsuccessful spin.

The game has three different features:

These extra features can help you make that essential winning spin, making sure the game doesn’t end just yet. 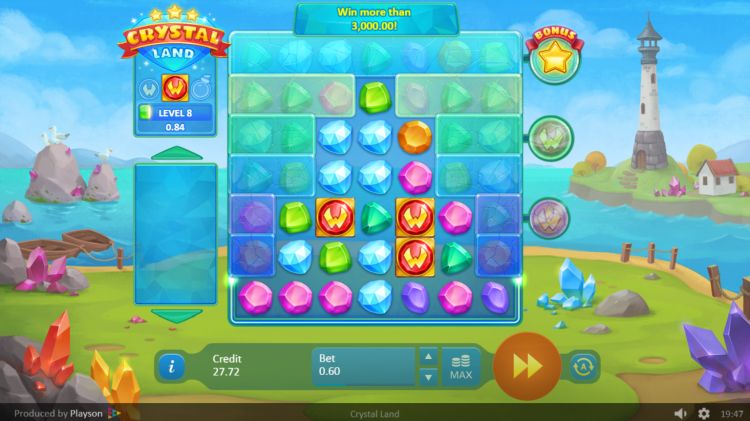 After each level up, you also can win the piggy bank, that is getting stuffed with solid cash during the game.

You can spin a mini wheel with three possible outcomes:

With five consecutive winning combinations, you enter the Crystal Land bonus game. We think it’s a tremendously fun and original bonus game, that can award you astronomical amounts as well.

You continue to play on the now wholly freed up screen with 7 x 7 symbols. A small, a medium and a large treasure chest hide behind these symbols. The goal is to get rid of as many symbols as possible, thus revealing the treasure chests. In these treasure chests, you will find multipliers – the larger the chest, the higher the multipliers.

During the bonus round, winning combinations are formed by unlocking three magic colouring potions in a row. Of course, you want to create the largest possible winning clusters with it. The larger the cluster, the higher the prize and the more symbols you can get rid of.

Hopefully, it will also get you some wilds and bombs along the way. The bombs can be of great help towards the end, as they generously blow up some more symbols and perhaps even uncover another treasure chest.

Altogether, it may sound a bit complicated, but actually, it’s not that bad. As soon as you see the bonus game, everything will be logical in a jiffy.

Our verdict on the Crystal Land slot

We think Crystal Land is an enjoyable title by Playson, and we still play it regularly. It is a cheerful and colourful slot filled with all kinds of mystery features that spice up the game from time to time.

The main bonus is a clever invention: you can earn tidy profits, but you have no clue whatsoever as to whether and how much you’re winning until the very last moment.

4 out of 5 stars for Crystal Land.