Thunderkick kicks the year 2021 off with a futuristic slot. Yeah, it smells like Starburst, and nowadays every serious provider needs to have such a slot on the shelf. But I keep asking myself why the heck Thunderkick has decided to do this. The previous slot Crystal Quest Arcane Tower was futuristic enough!

Cosmic Voyager (Thunderkick) – this slot is a different beast

I know Thunderkick for its crazy and funny and peculiar slots (often with strange beasts). This slot has anything but that.

Let’s hope it’s a one-off slot from this hilarious and great game maker.

Cosmic Voyager itself? Well, it’s nice, but it doesn’t leave an indelible impression on me. 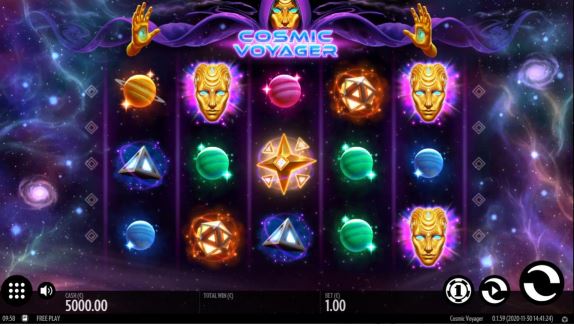 And even with that, the slot doesn’t stand out.  Although of course, it is still a very nice win! Below we will tell you if it is promising or not.

Casino Hipster verdict: Not too bad, but I wouldn’t say it’s hot. I miss the typical funny Thunderkick laughter.

It is 5 reels and 3 rows of symbols slot with 10 paylines. In short, easy to grasp.

Furthermore, you have the Cosmic Voyager symbol that functions as Wild symbol and as Scatter symbol. 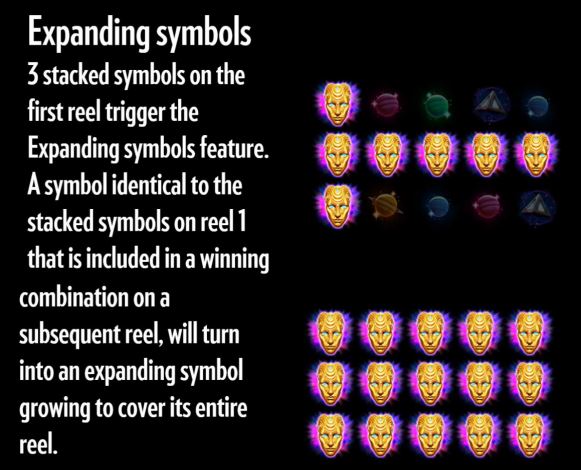 If you spin three identical symbols on the first reel and if you have the same symbol on any of the other reels, those other reels become fully stacked.

In short, this feature makes it possible to land multiple stacked reels and who knows, even a full screen with identical symbols.

A full screen with golden masks or stars is good for 2500x and 1000x respectively. Shall we say that this feature has a lot in common with a Book of Ra slot and a linked reels slot (like Netent’s Twin Spin or even Twin Spin Megaways)?

Simple. If you spin 3 or more Cosmic Voyager symbols, you get 10 free spins.

During the bonus game, you gain another 10 free spins, if you spin manage to spin another 3 (or more) Cosmic Voyager symbols. 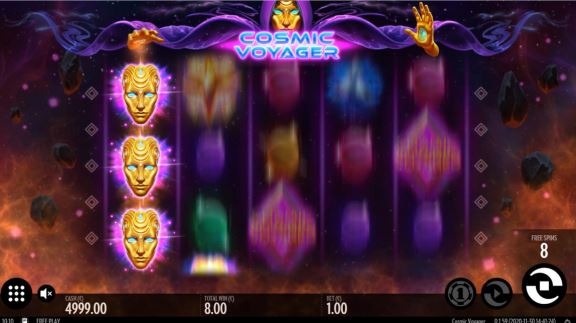 The free spins play in the same way as the main game, but it has one significant advantage, though. You automatically get three identical symbols on the first reel. And better, these are always high- or medium-paying symbols.

It activates the Expanding Symbol feature straight away and for each free spin. In short, many opportunities to land some lucrative wins!

Again, you have to hope for golden masks or golden stars on the first reel and then the same symbol on reels 2, 3 and preferably also on reels 4 and 5.

The payout percentage is 96.14%, which is around the average of online slots. It certainly isn’t one of the best paying Thunderkick slots, but it’s not bad either.

Cosmic Voyager slot – the variance (volatility) is medium to high

The volatility is 11.46 if we are to believe Thunderkick. Therefore, the variance is medium to high.