You can wager fixed amounts per spin, which starts at $€ 0.10 and goes up to $€ 100 per spin. Thanks to its 10 paylines Cosmic Eclipse is a relatively simple slot. There aren’t many bonus features: just one main bonus feature called The Black Hole Feature.

Cosmic Eclipse is a so-called “Netent Exclusive” slot, which means you can only play it at selected online casinos

There are just a few casinos who regularly have Netent exclusive slots, including LeoVegas, Kindred (a.o. Unibet and iGame) and the Betsson group.

Cosmic Eclipse has 10 paylines, 5 reels and a cosmos/space theme. This Netent slot is all about planets, black holes and, of course, big wins. 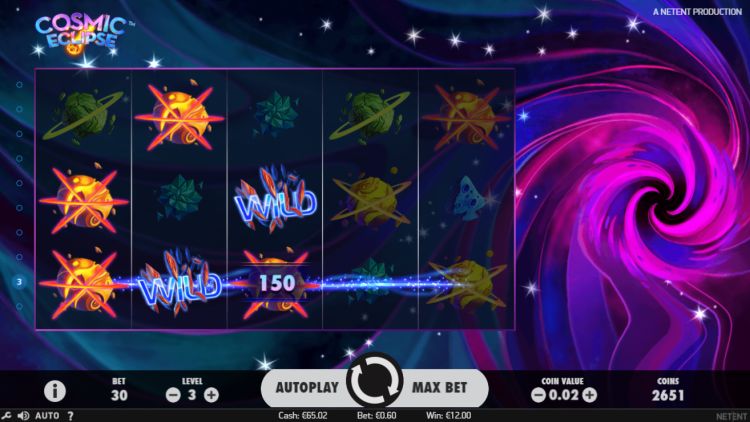 More about that later in this review.

First, let’s have a look at the payouts.

The game has only seven symbols: six regular symbols and a wild symbol. That’s it. The wild symbol replaces all other symbols.

Three out of the six regular symbols are planets. Well, we’re not exactly astronomers, so let us point them out by colour.

The payouts of the planets for a 5-of-a-kind on an active payline:

The low-value symbols consist of a mix of raw materials and card symbols and yield you between 30 and 50 coins.

The base game’s hit frequency is quite low, with many dead spins on average. If you want to grab a grand prize, you need a helping hand from the bonus feature. 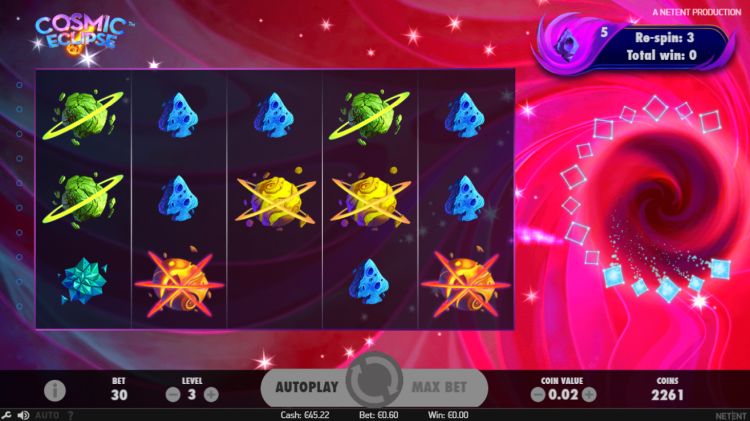 The Black Hole Feature takes centre stage with this slot and will surely attract gamblers who are into exciting respin features.

It works as follows:

As soon as no new special symbols hit the reels anymore, all collected symbols (max. 15) are placed back on the screen, starting as far on the left as possible.

This bonus feature can be very lucrative and is best described as a cross between the Butterfly Staxx and Tornado Farm Escape bonus features, two other Netent slots.

The Cosmic Eclipse slot’s variance is medium. You can realize the maximum profit during the bonus game with a full screen of Orange/Red planets. If you were playing max, then you’d pocket 60,000 coins. In other words, 600 x your total bet.

The payout rate is an excellent 96.52%. Luckily, Netent is not following the trend of many game providers who sneakily lower their payout rates.

With this payout rate, Cosmic Eclipse may not have made it into our top 10 best-paying slots. However, it does hold its own. 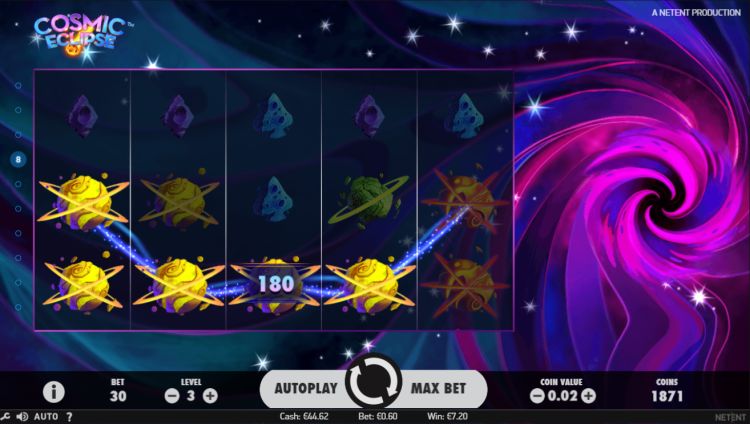 Our verdict on the Cosmic Eclipse slot

Cosmic Eclipse is a delightful video slot, especially interesting for beginning online slots players. The game is simple and doesn’t have a lot of complicated features.

The Black Hole Feature is both exciting and lucrative. With every spin, you wonder whether that one important symbol will hit the reels to fill up the meter on the right side of the screen even more. The further you get, the more rewarding the payouts, so there’s plenty of money to be made.