When you open Aladdin and the Sorceror, you will notice the beauty of this slot in terms of animations and graphics.

In Aladdin and the Sorceror, our carpet-flying hero takes on the evil wizard (the Sorcerer).

Besides the high quality in graphics, sounds and animations, we are more than impressed with the features: unlimited free spins, a real battle and re-spins with sticky wilds and extra multipliers. What are the theoretical RTP, the variance and the maximum win of Aladdin and the Sorceror?

The theoretical payout percentage is 96.23%, which is surprising as almost all Pragmatic Play slots have an RTP of 96.5%; good enough for us.

In terms of variance, this slot also differs from most Pragmatic Play slots. The score that Pragmatic play gives itself is 4.5 out of 5. Whereas most slots have a score of 3 or 3.5 (such as Honey Honey Honey, the Great Chicken Escape or John Hunter and the Tomb of the Scarab Queen), this slot is an exception. Could this be the start of a move towards more volatile slots?

With Aladdin and the Sorceror, you can win no less than 6,250 x the total bet. This is indeed a staggering win potential, but we expect that wins of this magnitude are extraordinary. The top wins are more likely to be around 1,000x the bet.

Gameplay and features of the Aladdin and the Sorceror slot

Aladdin and the Sorceror has the classic roll setup: 5 reels with 3 rows of symbols. There are 20 fixed paylines. 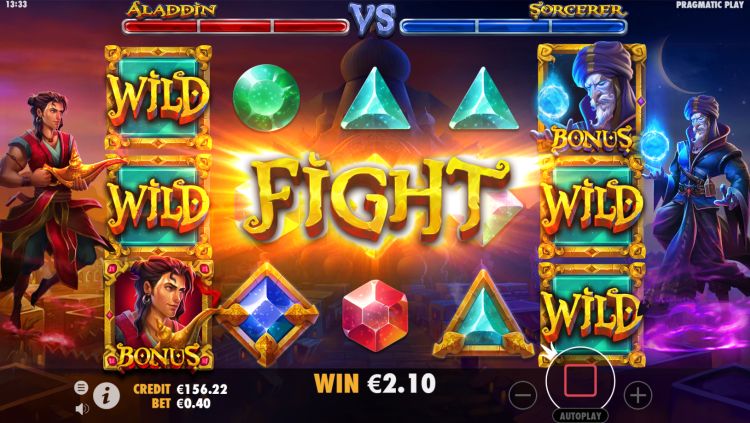 The five premium symbols all consist of gems that come in a golden frame.

The most attractive stone is the red ruby, which guarantees you a win of 50x the bet if you spin a 5-of-a-kind.

The other four premium symbols still yield wins between 20x and 7.5 x the bet for a 5-of-a-kind kind.

Lower symbols are the same five gems but without the golden frame. These yield smaller wins, between 2 x and 6.25 x the total bet.

Then there are Wilds, which replace all symbols except for the two bonus scatter symbols: Aladdin and the Sorceror.

5 Wilds on an active payline also leads to a payout of 50x the bet. The Wilds can contain additional multipliers in the bonus round, which makes it all even more exciting.

This mini-feature will usually provide some decent wins. 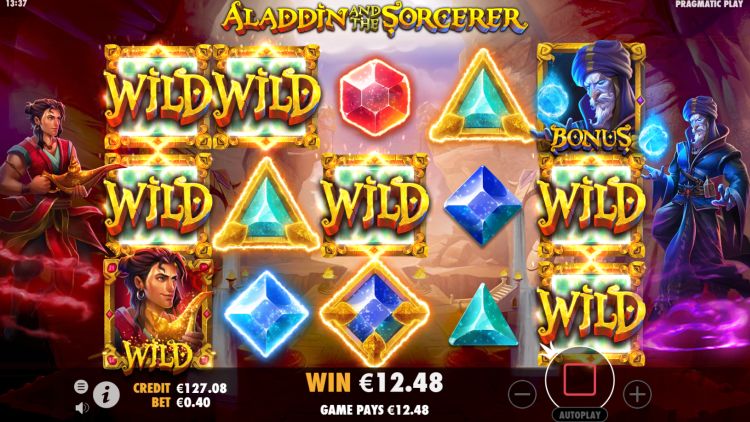 Now the first stage of the free spins bonus (called the Respin Feature”) is activated.

Here, Aladdin and the Sorcerer fight each other. If the Aladdin scatter is on reel 1, and there is no Sorcerer scatter on reel 5, Aladdin wins the first round of the fight. And the other way round.

The Respin feature continues until either Aladdin or his arch-nemesis has won 3 times (it’s like a best of 5 rounds).

If the Sorcerer has won, the Respin Feature end, and the total win is added to your balance.

However, if Aladdin ends up being the winner in this interesting battle, you advance to the next level (called “Respin Level 2”).

Here, all wilds from the previous spin remain sticky until this feature has ended. In this feature, you are awarded 3 extra respins.

In a dream scenario, you spin lots of Wilds in your last spin of Round 1 and take these as “a nice way to begin” Round 2.

As the wilds are sticky and have inherent multipliers in the 2nd and 3rd (and final) spin of Round 2, you can imagine it can be highly lucrative. 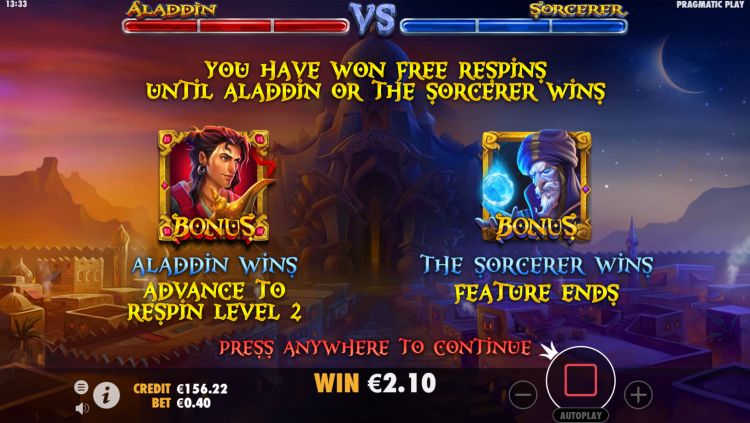 Our verdict on the Aladdin and the Sorceror slot

Aladdin and the Sorceror is a fantastic slot from Pragmatic Play. Besides the stunning looks and beautiful theme, the game has a lot of depth.

The stacked wilds, the Respin Feature (where Aladdin and the Sorcerer are battling it out) and the Respin Level 2.

Even then, the results can be very volatile. You can win something significant but can also end up with a small win all the same.