I expected an evil witch with an ugly hardened wart on her big nose. But the witches in NextGen Gaming’s Witch Pickings video slot are quite the very opposite of that. Three cute girls who will enchant you and help you pocket the best rewards of the game. In fact, to me, they look like a girl band like the Spice Grils with some colourful witch hats on them.

The bonus features illustrate this best.

The game has nice colourful graphics, and the background music and modern sound effects reinforce the feeling of being in a fairy tale.

Below, we gladly explain what to expect from this colourful game and the meaning of the many symbols in this game. 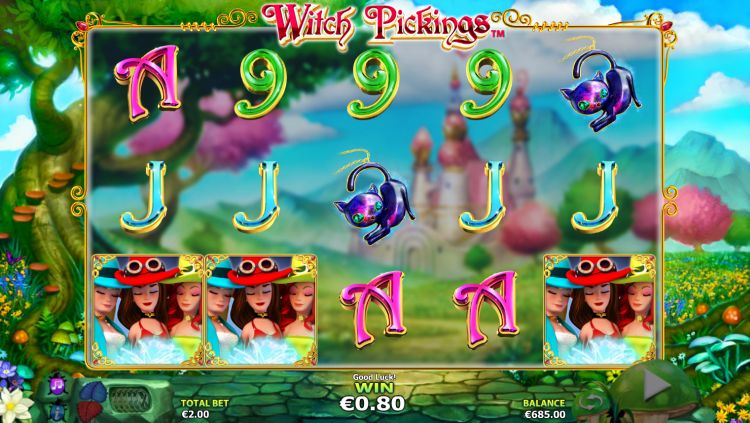 How does the Witch Pickings video slot work?

The Witch Pickings video slot consists of a standard playing field of 5 reels and 3 rows of symbols related to the theme. You play the game with 25 fixed paylines, for which you have to pay 40 coins.

The castle is by far the highest-value symbol in the primary game. If you spin 5 identical ones of this high-value symbol on the reels, then it will yield no less than 800 coins.

In this fairy tale, you will come across a large pot in which the magic potion is made — the symbol with the big pot awards you 600 coins for 5-of-a-kind.

The bottle filled with magic potion can also have an enchanting effect on you. This symbol earns you 500 coins for five identical ones. The pendant with the mint green-eyed cat will reward you 400 coins for 5 of the same symbols.

All in all, you can win attractive prizes during the primary game.

In the primary game, you can win the jackpot by spinning the 5-of-a-kind of the Wild symbol. That gives you an impressive 1,000 coins.

It’s a challenge but remember: if it’s conceivable, then it’s possible.

You can recognise the Wild symbol by the purple fortune-teller globe with the Wild text underneath. The Wild symbol replaces all other symbols except the scatter symbol.

Read on to learn more about what the scatter symbol can do for you in this game.

The theoretical payout rate of the Witch Pickings video slot is between 95.79% and 95.93%. That is on the low side.

The variance is medium. 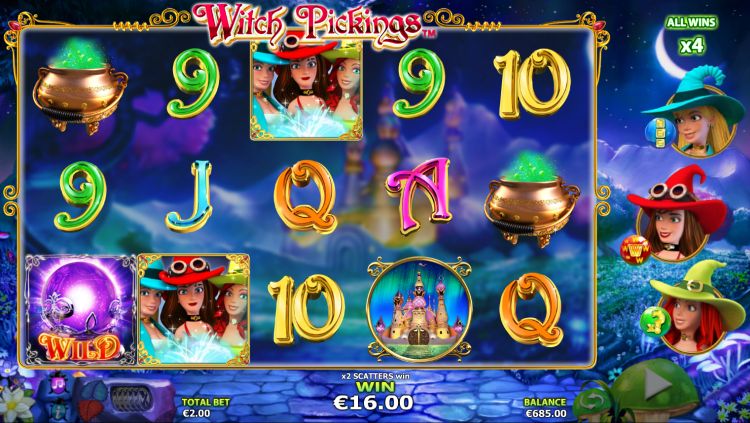 You’ve already received much information, but we haven’t even started about the three cute little witches.

Their role in the game becomes evident in the Witch Pickings Bonus Features.

It starts with the scatter symbol that consists of an image of the three cute witches.

Three or more scatter symbols on the reels activate the Witches Bonus. You will earn 5 free spins.

Before you can play the 5 free spins in the bonus game, you can pick from 3 features, 1 of every witch:

Another fun feature of the Witch Pickings video slot is that you can win extra prizes the more milestones you reach.

For example, you’ll be rewarded for the number of times you’ve been able to activate the Witch Pickings Features.

Our verdict on the Witch Pickings video slot

A compliment to NextGen Gaming is genuinely appropriate here. By releasing the Witch Pickings video slot, they have added a visually appealing game with a high fun factor to their assortment.

Not to mention the many possibilities within the bonus game.