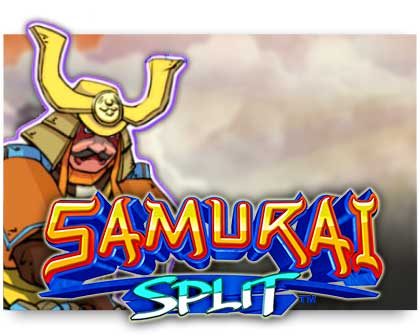 This online casino games developer seems to have put quite some money and energy into designing high-quality animations. The accompanying music and the traditional old Japanese village you see in the background ensure you sense the Japanese atmosphere.

NextGen Gaming has added the Samurai Split slot to their collection, and it is a gem of a game

The Samurai Split video slot is a tribute to the Samurai warrior from ancient Japan.

In the story of the Japanese warrior, who helps you pocket some satisfying rewards, you see matching symbols such as a Samurai on a horse, an old Japanese temple, a portrait of a Samurai and of course the Samurai sword, the katana.

You will need to use these symbols to make the winning combinations. Don’t be alarmed if you see the Samurai warrior appear at random and split a symbol in half with his Samurai sword.

It means you’ll get huge prizes.

Let’s visit this old Japanese village together and experience the myth of the Samurai warrior. 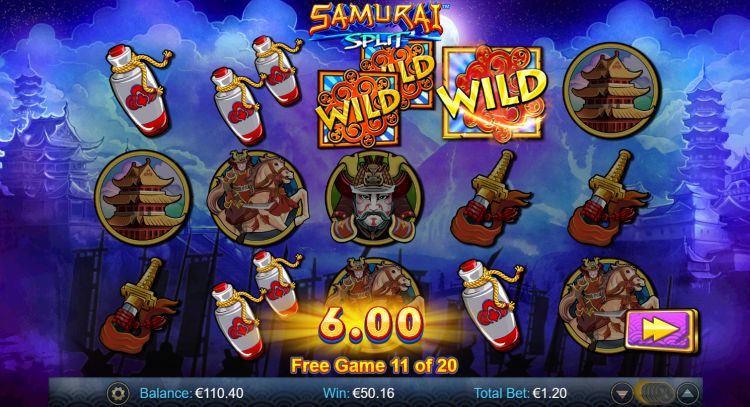 Not only the graphics make this an attractive video slot to play, but above all, the payout rate of 96.6% makes it more than worth your while. The variance is a little difficult to estimate, but it’s medium as far as we’re concerned.

The game features symbols consisting of a Samurai sword, a Japanese water bottle, a Samurai portrait, a Samurai on a horse and a Japanese temple. If you spin 5-of-a-kind of these symbols, then you will earn 100 to 250 x your bet.

The popular card symbols 10, J, Q, K and A are also present in the Samurai Split video slot, and they are the least lucrative in the base game. Five identical low-value symbols make you a mere 50 to 75 x your bet. As the saying goes, take care of the pence, and the pounds will take care of themselves.

The Wild symbol of this game is some kind of Japanese emblem. It replaces all other symbols, except the scatter. We’ll come back to the role of the scatter later. If you spin 5 of the same wild symbols, you earn a smashing 500 x your bet. 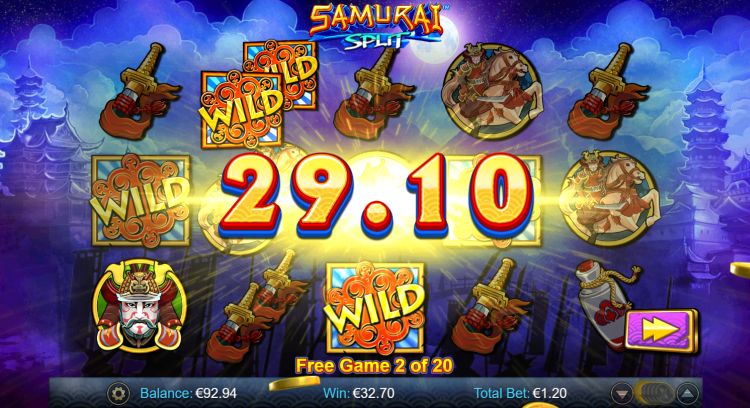 The Samurai Split video slot is filled to the brim with fun bonus features that increase the chance of high payouts. This game has no less than three features that boost the fun and excitement.

You can expect the first bonus feature to happen in the primary game. Every symbol that contributes to a winning combination can be split in half by the Samurai’s sword.

The Warrior Spins feature is a small but convenient bonus feature.

It can be activated during any spin. The low-value symbols, consisting of the well-known Royal card symbols, are temporarily taken out of the gaming, leaving only premium symbols. 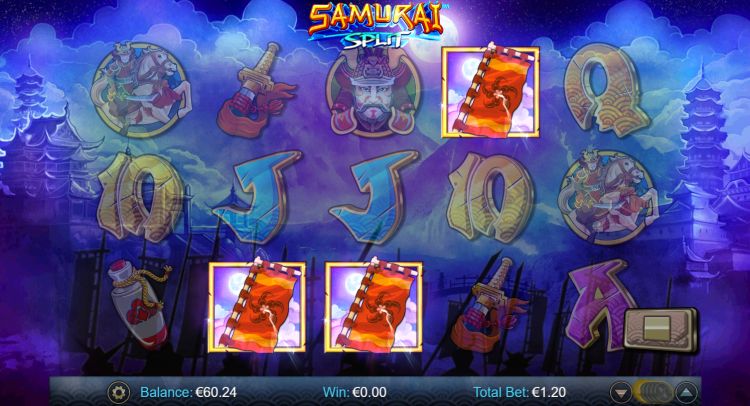 The scatter of this game is a flag of the Samurai. You activate the Free Games Feature by spinning 3, 4 or 5 of these flags on the reels. So you earn 5, 10 or 15 free spins.

During this bonus game, the familiar card symbols 10 – A are removed from the game, too. You only play with symbols like the Wild, the Samurai’s portrait, the Samurai sword, the temple, the Japanese water bottle, the Samurai on the horse and the scatter. As a result, higher rewards are possible.

You can trigger extra free spins during the bonus game. Prepare for a fun and exciting bonus round if you can spin at least 3 scatters.

Our verdict on the Samurai Split video slot

I love to give compliments as long as they are justified. And NextGen Gaming has earned a few with the release of a remarkably entertaining game like the Samurai Split video slot.

Fun graphics and matching music that does justice to the Japanese theme will keep you entertained while playing the slot.

There are no less than three features in this game. They are not only fun and exciting to play, but you can also grab some serious payouts regularly.