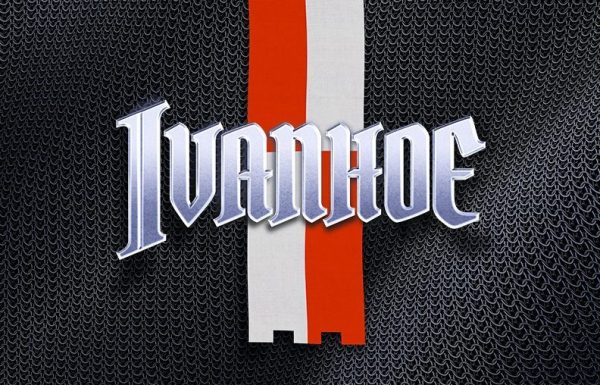 Starring pious knight Ivanhoe who stood up for the less fortunate and fought against the rich much like a kind of one-person A-team (before such a thing was even thought of).

Roger Moore, who has since passed away, made Ivanhoe into an unforgettable television hero. Little kids stayed home to watch the show. He was so cool, riding his white horse.

Side by side, we’re proud to ride with Ivanhoe.

At his call, we jump to help him ride along.

The song we sing is a free and joyous song.

The Ivanhoe slot: a smart move on the part of Elk Studios

At Elk Studios, they must have figured something along the lines of ‘small children grow up.’ And guess what a lot of grown-ups do? Exactly, they play at online casinos.

So these Swedish game developers made quite a shrewd move by designing an Ivanhoe slot. They probably didn’t pay through the nose for the trademark rights, and almost everyone who grew up with the series will spontaneously sing along with the Ivanhoe song.

And do you know what’s really great? That this slot turned out to be very entertaining and combined elements of old-fashioned fruit machines with modern technology. 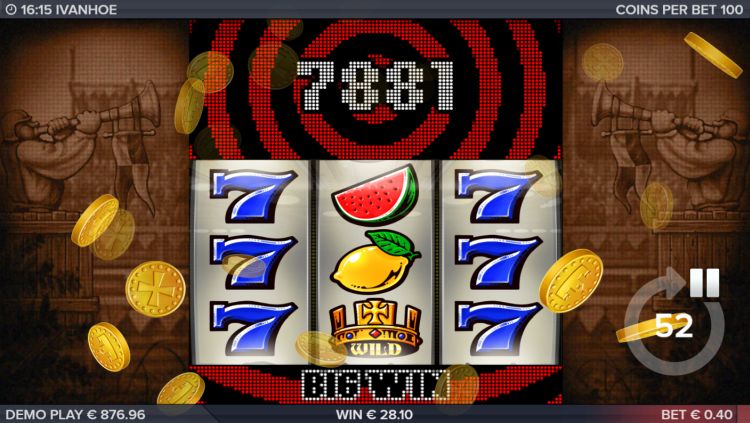 How does the Ivanhoe slot work?

Ivanhoe has a typical fruit machine setup with three reels and three symbols per reel. There are 17 fixed paylines, and bets range from a minimum of $€ 0.20 up to a maximum of $€ 100 per spin. The payout rate is an excellent 96.3%.

As is the case with all slots developed by Elk Studios, you also have the option to activate a betting strategy. If you choose to do so, the slot determines the bets for you according to fixed increasing and decreasing betting patterns, depending on the strategy. You can pick between the Optimizer, the Leveller, the Booster or the Jumper strategy. Of course, you can decide for yourself how much you want to put down per spin.

The symbols consist of a nice mix of the ones you would find in a classic fruit machine. Things such as sevens, bars, cherries, melons, and lemons are typical Ivanhoe attributes such as the Crown and the Banner.

The payouts are quite substantial: 3 red 7’s award you 3,000 coins, and a 3-of-a-kind of blue 7’s is worth 1,000 coins. The symbols you definitely want to get a hold of, though, are the Ivanhoe Bonus Symbols as they activate the free spins bonus. 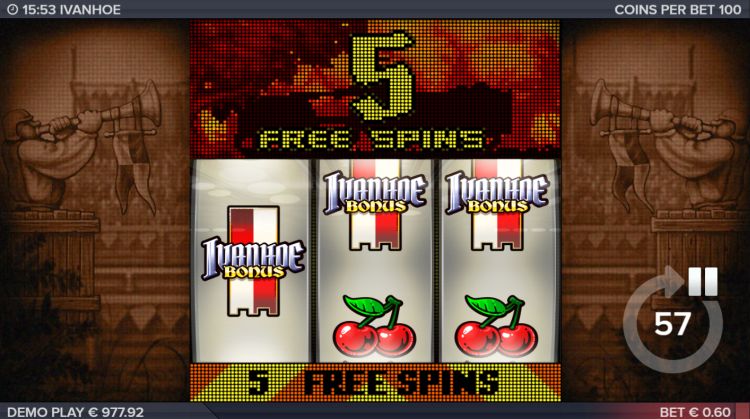 The free spins bonus of the Ivanhoe slot: retriggers, extra wilds and multipliers

3 Ivanhoe symbols on an active payline activate the free spin bonus. You receive 5 free spins during which you have to try to collect as many points as possible.

Did you gather sufficient points?

Great! That means you move on to the next level and earn extras:

During the free spins, the Crown is wild, and each Ivanhoe symbol hitting the reels gets you an extra free spin.

Not only is the free spin bonus a lot of fun, but it can also be extremely lucrative, especially if you manage to reach the higher levels and get yourself some extra multipliers. 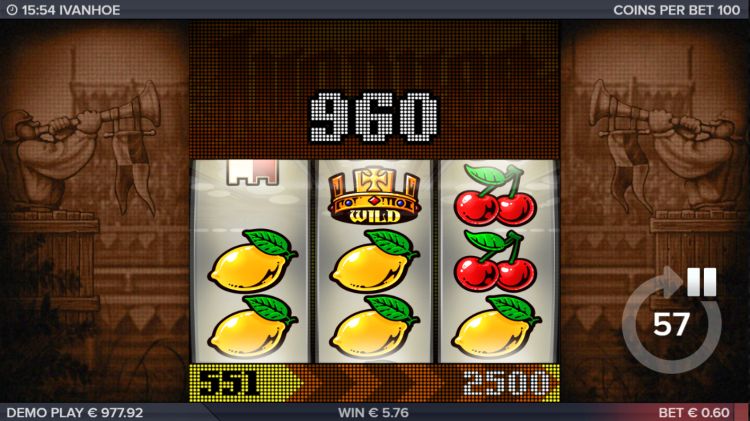 Our verdict on the Ivanhoe slot

The Ivanhoe slot has a unique style. Not only is there a real mix of traditional and modern symbols, but there’s also an actual LED scoreboard at the top of the screen. It displays animations and your winnings, just like the scoreboards you know from the good-old pinball machines of yesteryear.

How weird this all may sound, the funny thing is that this game works like a charm. The sound effects are amazing (e.g. snorting horses and blaring trumpets), and the balance between the base game and bonus features is also cleverly calibrated. You may not win the bonus all that often, but just frequently enough to capture your attention.

An extraordinary and very successful slot developed by Elk Studios.