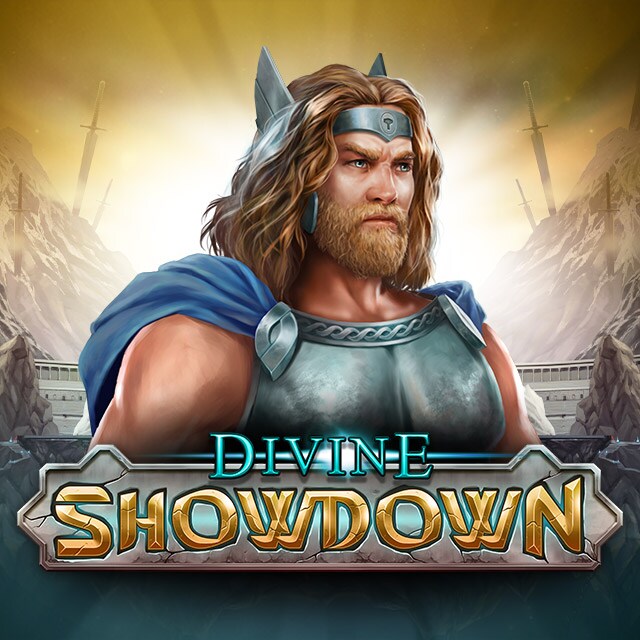 With Divine Showdown, Play’n GO brings a group of gods to your screen, who battle each other with high intensity The result? Occasionally fireworks go off big time with this high-variance video slot.

They all have their mini-feature and are not afraid to stand up to each other and hold their ground.

Play’n GO is concluding a very productive 2019 and this Divine Showdown, released on December 12th, will pretty much be the last Play’n GO slot of the year. 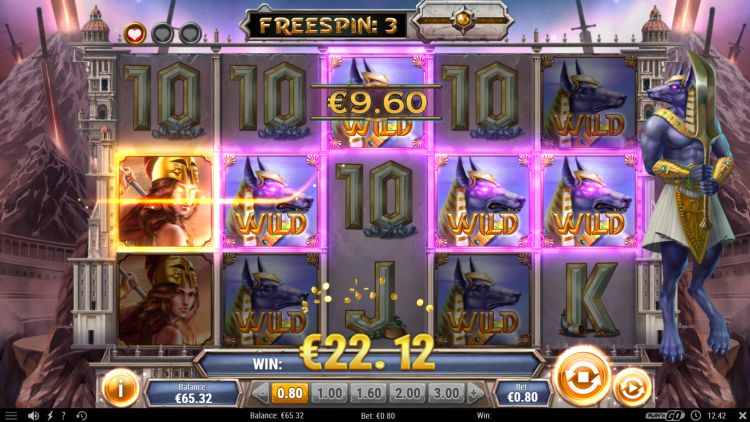 Divine Showdown has 5 reels with 3 rows of symbols with 20 fixed paylines.

The payout percentage is not as straightforward as it may seem. As with all Play’n GO slots, there are two different percentages in use.

At best, you get a theoretical Return to Player of 96.5%. That’s an excellent RTP. But there are also versions of this slot that only pay out an average of 94.5%. This is much lower, and you should always be sure to read the game rules before you play this slot with real money.

The variance of Divine Showdown is high, and you can win up to 5,000 x the total bet.

The wild symbol replaces all symbols except for the bonus scatters. Five wilds on an active payline will award you 20 x the total bet. A full screen of wilds yields  400 x the stake.

The gods are the premium symbols and, led by the tough-looking Thor, and they will earn you between 8x and 16x the total bet.

The card symbols (10, J, Q, K and A) are merely visual stuffing and barely worth anything. Five aces are the most profitable of the lot: 2 x the total bet.

Any God can appear at any time and show off his/her skills:

As soon as you spin three or more scatters, you win the free spins bonus.

Now it’s time to make choices. You can choose 1 of the 4 gods who will battle for you with the other gods.

You start with three lives, and after each turn, you spin the Battle Reel.

This mini wheel determines whether you have to battle one of the other three gods (3 to 4 odds) or whether you get a free spin without a fight.

Power Symbols of the Gods will spin on the middle three reels if you have to fight. The one with the most symbols wins the round.

The victor ensures that their superpower is activated for the next spin, but if you lose yourself, a life is lost.

The beautiful thing about this bonus round is that you always get an extra feature, whether you win or lose the fight. 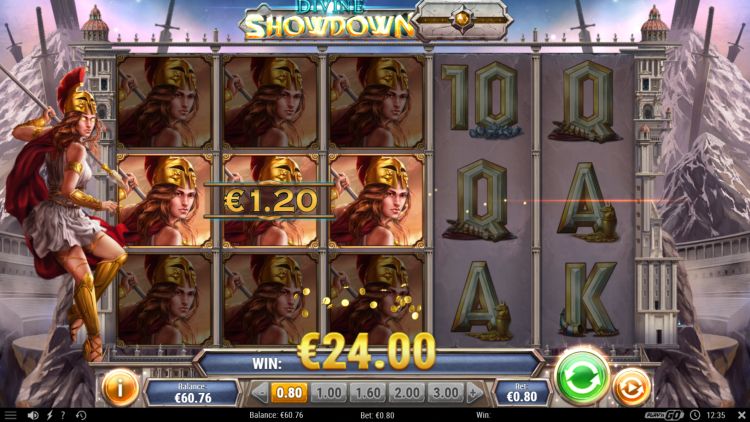 Our verdict on Divine Showdown

However, this slot won’t make it into our top 10 of favourite Play’n GO slots.

Graphically this slot is well-developed, you can win serious amounts of money, and the bonus features are fun.

Yet it lacks a bit of magic, that slots like Honey Rush and Reactoonz, for example, bring to the table.