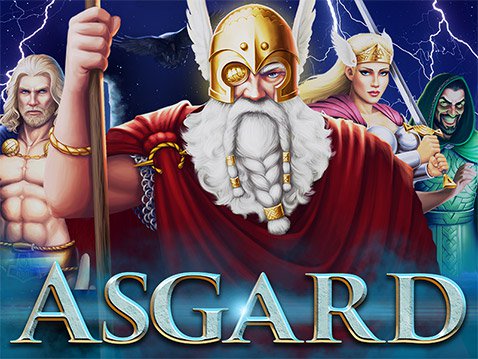 Asgard is an epic slot release by Realtime Gaming (RTG) that was released in December 2017 RTG has been putting out some great slot titles lately, including Bubble Bubble 2, Kung Fu Rooster, and Swindle All the Way.

RTG has been putting out some great slot titles lately, including Bubble Bubble 2, Kung Fu Rooster and Swindle All the Way.

But Asgard is even a step above all these slots, with impressive visuals, dramatic sounds and massive potential for big payouts. There is a real cinematic feel to this game, with polished graphics, high production values and some pretty cool Norse Gods to help you along.

Freya, Loki, Thor and Odin are the stars of this All Ways Pays game which features 243 ways to win, Golden Wilds with 2 x multipliers and a bonus game with four different free spins features. These free spins bonuses are unlocked as you progress during the game. The further you get, the more powerful the free spins bonuses become.

The randomly activated Thunderbolt feature turns up to 5 reels Wild for massive wins during the base game.

If all this sounds a bit familiar, you might be right. Asgard is an adaptation (call it a homage to) of Microgaming’s superb slot Thunderstruck II. 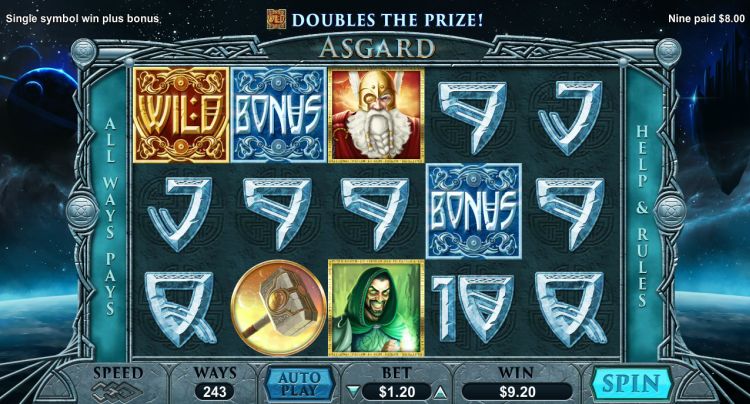 The Asgard slot is played on a standard 5×3 layout and offers 243 ways to win. This means that you will win as long as identical symbols land on adjacent reels from left to right.

Bet sizes vary from $0.30 per spin up to $7.50 per spin. The autoplay option will allow you to play 1,000 spins and you can even speed the gameplay up by clicking the button on the left.

The premium symbols are represented as the four gods themselves, Freya, Loki, Thor and Odin. Five of these gods pay out between 350 and 500 coins, double that amount if a Golden Wild is involved. The Golden Wild symbol appears on all the reels and substitutes all symbols except the blue “Bonus” symbol, and the scatter symbol. Land 5 Scatters, and you will win 1,250x your total bet.

The low paying card symbols are worth 100 – 150 coins when you get a five of a kind. Again, you can double your winnings with the Golden Wild symbol. 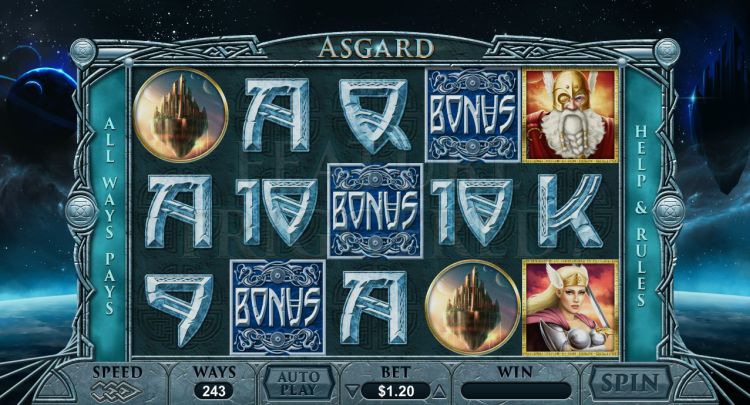 The Thunderbolt Feature: up to 5 fully stacked wild reels

The first feature you can trigger by landing 3 Scatters is the Goddess feature awarding 15 free games with all prizes tripled. This free spins feature can be retriggered.

From the 5th trigger onwards, by landing 3 or more Bonus symbols, the Loki’s Magic feature is unlocked. Choose it and you are awarded 20 free games with special Wilds added to the reel 3. The special Wild symbol appears during the Loki free spins only and substitutes for all symbols except for Scatters and the Golden Wild.

Once the special wild appears on the screen, it replaces random symbols on up to 5 reels. If you land 2, 3, 4 or 5 Bonus symbols on the reels you will also get 1, 2, 3 or 4 extra free games, respectively. 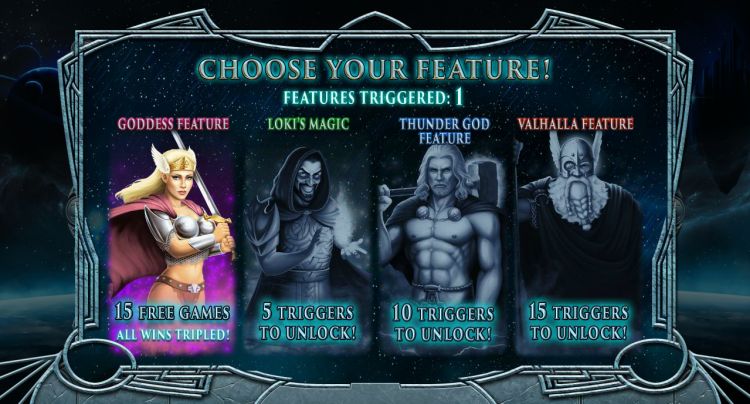 The Thunder God feature can be unlocked from the 10th trigger onwards. By selecting this feature, you are rewarded 25 free games with Wild Multipliers. On every win, a 2x or 3x Wild Multiplier will appear.

If the Wild Multiplier overlays a Golden Wild symbol, wins from this combination are multiplied by 4x or 6x. This feature can be retriggered, awarding 5 extra free games.

The last feature that can be unlocked is the Valhalla Feature and is available from the 15th trigger. It comes with 30 free games with morphing symbols. After winning combinations, winning symbols disappear to leave a place for new symbols to show up, and possibly form new winning combos.

With each respin the multiplier increases up to a maximum of 5x. The feature can be retriggered for 5 extra free games.