What are best-paying online slot providers?

Some providers offer slots with a much better Return To Player (RTP) than others. Casino Hipster did some real digging, and what we found, kind of shocked us.

Which online slot providers have the best (and worst) payout percentages?

Some providers offer slots with a much better Return To Player (RTP) than others.

Casino Hipster did some real digging, and what we found, kind of shocked us.

It turns out there are considerable differences in RTP between the many slots providers.

Do you want to be smart and know which providers payout the most?

Let’s be clear about it: some slots providers have slots with a much better RTP than others.

Let’s cut the crap and get to the point straight away.

The list below shows the RTP of slots that were released by 16 of the most prominent slot providers.

With so many slots out there, you have more than enough options to choose from. Yes, you can look at the attractiveness of the slot, in terms of gameplay or animations. Maybe the maximum win or the volatility of the slot. But it is at least as important to look at the RTP of the slot.

Some providers (in particular Microgaming) released slots before 2012, but as these slots are so outdated, I decided to ignore these slots in my research.

The table below provides the average RTP of all the slots released in that period.

Right after the table, I have provided some more detailed commentary for each of these providers. 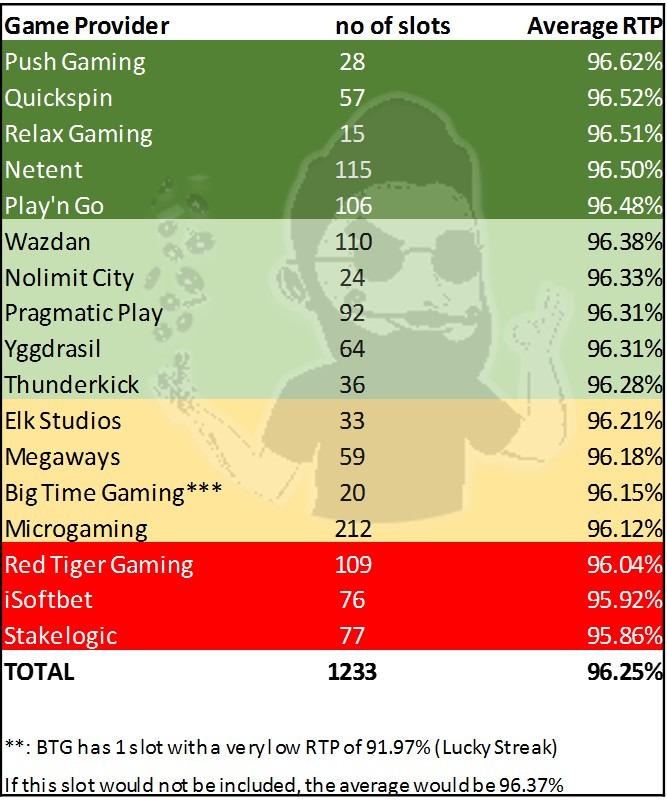 Let’s analyze the results a bit more in detail for all 16 providers.

Push Gaming slots all have payout rates between 96.5% and 97%

Push gaming has not released many slots, but without exception, do the Push Gaming slots have an outstanding RTP.

You could argue that they are op top of the list, as they have not yet released so many slots. But, at the same moment, you cannot find a Push Gaming slot with a low RTP!

The top 5 Push Gaming slots with the highest RTP are:

The RTP of most Quickspin slots is much better than average

More than 20 of the 57 Quickspin slots have a payout rate above 96.50%, and the slots Big Bad Wolf, Sinbad and Treasure Island even have RTP’s above 97%.

Quickspin not only delivers fantastic and entertaining slots but almost all slots with a better RTP than average.

Only a handful of slots score just below average, but all Quickspin slots have an RTP above 96%.

You can be assured that when you play Quickspin slots, you’re not being ripped off.

The RTP of Relax Gaming slots is great

Relax Gaming is a new player with some fantastic slots like Money Train, Let’s Get Ready to Rumble or Tower Tumble.

Being a newcomer, they understood the concept well, by producing slots with a high RTP.

Will they continue with their 2020 slots? Time will tell! 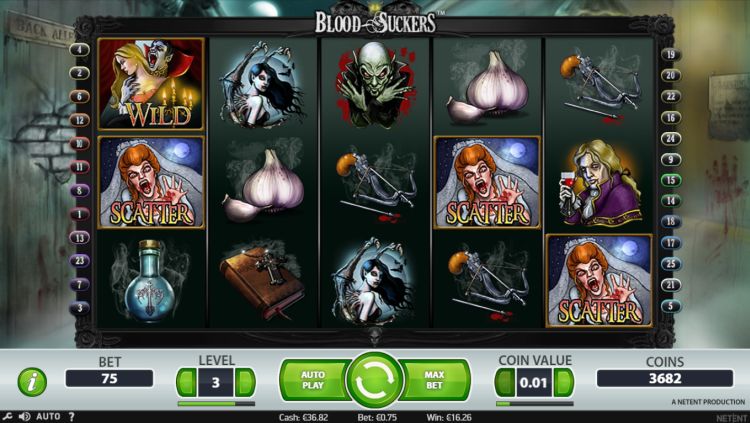 Netent, one of the leading providers, has released 131 slots in the 2012-2019 period. On average, the RTP of these slots is better than average, and some are excellent.

Let’s have a more detailed look.

The Netent slots are the red coloured dots, and you see that most of the red dots are above the green coloured line, the average RTP of the slots, which is around 96.25%.

You also see that most grey coloured dots (these are the RTP’s of the slots of 16 other providers) are below the red dots.

You can outsmart casinos by playing those slots with the higher RTP. Simple as that! And nobody will forbid you to be smarter. 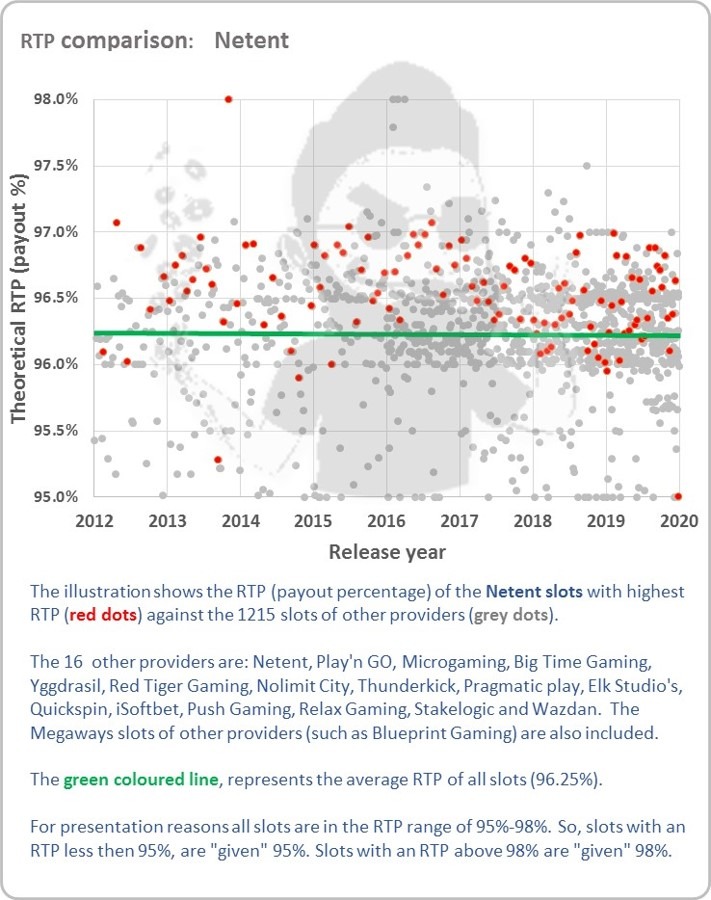 The top 10 Netent slots are:

Play’n GO slots usually have a pretty good return to player, but be careful

With Play’n GO slots, online casinos can choose to offer the same slot with a lower RTP. So, an RTP could, for example, be 94% at one casino and 96% at another casino. Therefore, you always need to check the game rules.

Having said this, my friend, looking at the default RTP’s of Play’n GO slots, you see that the RTP’s of most Play’n GO slots is around 96.5%, which is pretty good and better than average.

The top 5 best-paying Play’n GO slots (looking at the default RTP) are:

The RTP of Wazdan slots is pretty good

The 5 Wazdan slots, with the highest RTP’s, are:

It’s a relief to know that you’ll not be giving too much away, if you play a Nolimit City slot, as all their slots have an RTP above the 96% mark.

Here is the top 5 of best-paying Nolimit City slots:

Most Pragmatic Play slots pay well, but there are some stinkers

Pragmatic Play is becoming more and more dominant with slots as Wolf Gold, Mustang Gold or Buffalo King, to name a few.

The illustration below shows the RTP’s of Pragmatic Play slots.

We can see that there are some stinkers though: slots you should avoid are Tales of Egypt with 91.93% and 7 Monkeys with 92.71%. If you play these, the casino has outsmarted you.

The slots below have an RTP of over 97%!

Yggdrasil: the average RTP is 96.31%, but some slots have an outstanding payout rate

There are eight slots with an RTP of at least 97%. Plenty of options to choose from, for those players who seek slots with an attractive RTP.

Thunderkick: the average RTP is 96.31%, but some slots have an outstanding payout rate

Thunderkick has released eight slots with an RTP of at least 97%.

There are plenty of options to choose from for those that are looking for high-paying online slots.

Elk Studios released 33 video slots from 2015 up to 2019 and has and is delivering high-quality slots.

The good news is that none of the slots have a poor RTP, except for Champion’s Goal with an RTP of 95.70%.

Below the top 5 slots, ranked by Return To Player.

White Rabbit Megaways stands out and is also the best paying Megaways slot up to 2019.

Microgaming: over 200 slots with considerable differences in the RTP’s

Microgaming (or game studios as Triple Edge, Stormcraft, Fortune Factory or Gameburger) has released over 200 slots in the 2012-2019 period.

We see large differences: some slots have a pretty good RTP and some other dramatically low. We recommend looking at the game rules before you play a Microgaming slot.

Red Tiger Gaming: their newest releases have a poor RTP

I would have liked to tell you a different message, but Red Tiger Gaming has decided to release slots with an RTP well below 96% since mid-2019.

Below, you clearly see their change in strategy. 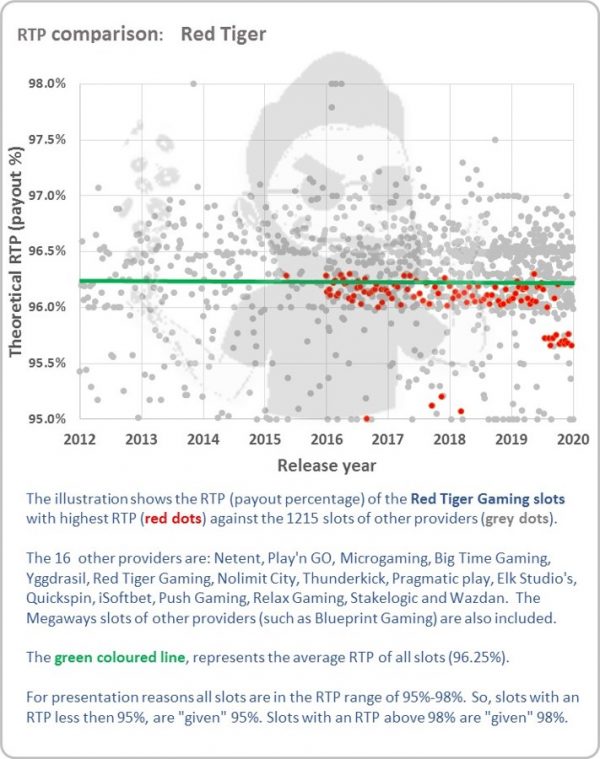 You, as a player, need to be careful and be smarter. Avoid playing slots with such a low RTP, if there are plenty of better options.

iSoftbet: some slots have a fantastic RTP, but some have a terrible RTP

Having said this, some slots have an excellent Return To Player.

When you play a Stakelogic slot, you could end up playing a slot with an RTP of 94% or 97%

What is disappointing is that so many of these slots have RTP’s, which barely exceed the 95% mark, which is already very poor.

The RTP’s of the four Stakelogic Megaways slots (released up to March 2020) all have an RTP above the 96% mark. That’s a relief!