It is a fruit slot. Either you love them, or you hate them. If you dislike these, don’t waste any more time reading this review. But, if you do, you’ll enjoy this slot. Why? Because it plays incredibly fast. You can do up to a hundred spins in one minute!

Ultra Hold & Spin slot from Pragmatic Play – have you ever seen a faster-paced slot?.

It is as fast as the other two Reel Kingdom slots, released in collaboration with Pragmatic Play: Hot to Burn and Ultra Burn.

Ultra Hold & Spin has a lot in common with these two slots, but this one has more to offer!

The high-paying symbols are the 7’s, followed by BAR symbols, Watermelons, Strawberries, and Yellow Star symbols.

The low-paying symbols are the usual Plums, Oranges, Cherries, and Black Cross symbols.

You also have WILD symbols.

What’s so appealing is that these unfold (expand) over an entire reel.

Three wilds on a payline are also good for a 50x win.

If you land Wilds on all 3 reels, you’ll indeed get a full-screen of Wilds. In other words, a 250x win! 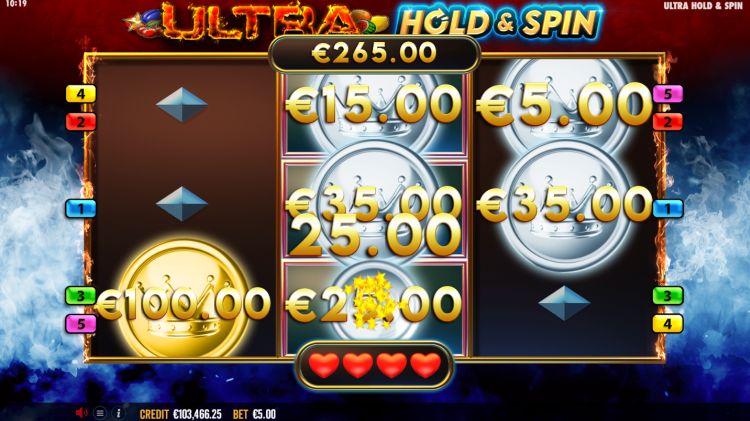 This Reel Kingdom slot is way more exciting than the other two slots, thanks to the Money Symbols (Gold and Silver ones).

These are good for 1x to 20x and only appear on the middle reel.

The Hold and Respin Feature

But more importantly, if you land the three Money symbols, you activate the Hold and Respin Feature.

It looks a bit like the Money Respin feature you see with slots such as Wolf Gold or Aztec Gems Deluxe.

You’ll get four free respins, and in each of these, the three Money Symbols on the middle reel remain sticky.

So, you have room for another six Money Symbols (on the reels 1 and 3).

After each respin, the symbols of reels 1 and 3 disappear again.

The respins continue until you fail to get any Money Symbols on reels 1 or 3 for four consecutive times.

But if you land one, the counter resets, and you still get another four respins.

In short, the Hold and Respin feature can be very lucrative, as (in theory) you can enjoy the respins for a very long time.

But there is even more.

There are also Diamond Symbols, which yield between 100x and 500x.

These lovely Diamonds can appear during the free respins on reels 1 or 3. Hurray! 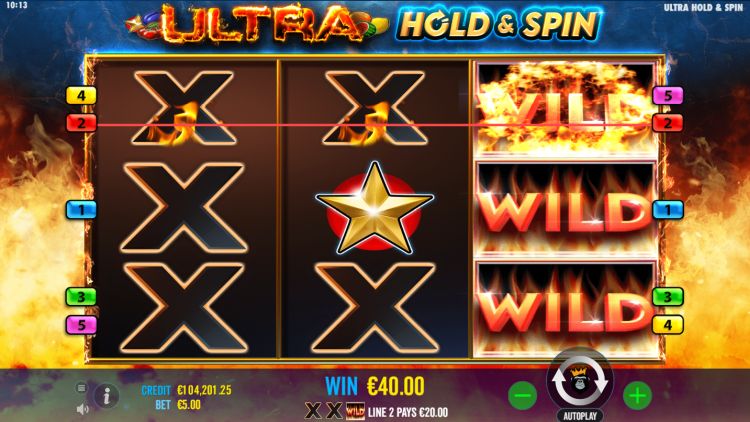 The payout percentage of Ultra Hold & Spin is an excellent 96.7%.

Pragmatic Play indicates that the variance of Ultra Hold & Spin is “medium to high” (4 out of 5).

I expect that most top wins are around 500x the stakes, with very occasionally a more massive one of 1,000x.

Wins topping 1,000x the bet are unlikely unless you have no problem spinning one million times.

Oddly enough, that doesn’t even take that long with this fast-paced beast!

But if you have a couple of minutes and some cash to spare, why not?