Thunderkick has big plans with the Beat The Beast slots: video slots aimed at players who dare to take a little more risk, with a mythological creature at the centre stage. The Beat the Beast series’s first slot was about the infamous huge deep-sea squid, the Kraken, called the Kraken’s Lair. In Mighty Sphinx, the plot revolves around the Sphinx, an essential symbol in Egyptian mythology. After all, it was the sphinxes that guarded the pyramids against intruders. Mighty Sphinx loses from the Kraken’s Lair in terms of maximum profit: you can win a maximum of 4,444 x the total bet, compared to 7,000 x the bet with the Kraken’s Lair. The variance is high. 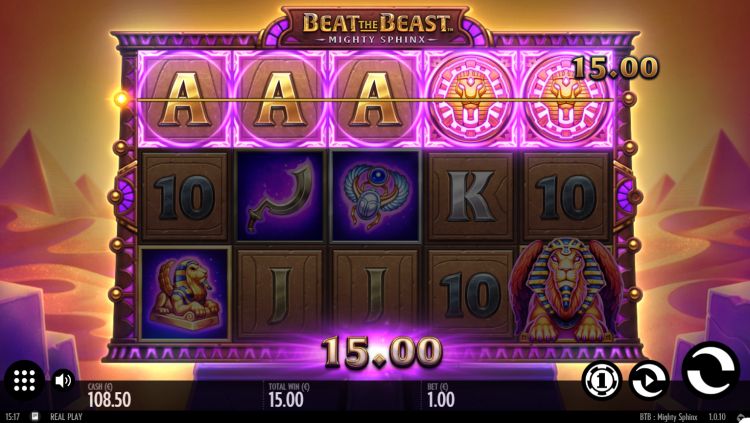 Mighty Sphinx is a video slot with a simple set-up: 5 reels, 3 rows of symbols and 9 paylines.

As you’re used to with Thunderkick’s slots, you pay a fixed amount per spin. This starts at 10 cents and runs up to $€ 100 per spin.

The wild symbol acts both as the wild and scatter symbol. On the one hand, it replaces all symbols, and on the other hand, the wilds activate the bonus feature.

Hit five wilds on an active payline for 1,000 x the total bet. That’s will nicely boost your bank account!

Sometimes sandstorms appear on the screen and, it starts to storm. This is a welcome sign that a minimum of 1 and a maximum of 3 mystery wilds will be placed on the reels.

The large sphinx is the highest paying regular symbol and yields a 250 x the bet for five the same.

The medium symbols include a small sphinx, a sickle and the scarab. These symbols are worth between 25 x and 50 x the total bet for five identical ones. 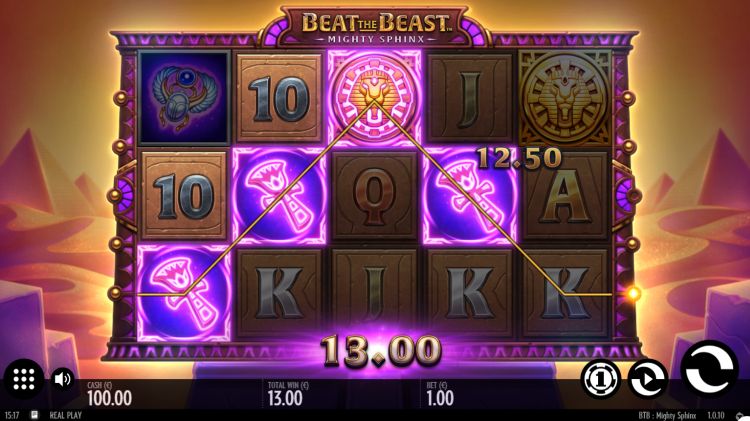 Three or more scatters will earn you the free spins bonus: 10 free spins.

It is essential to retrigger as often as possible during the free spins, with again three or more scatters.

Each retrigger awards you the following:

The more retriggers, the more extra wilds are in play and the more free spins you to enjoy all those wonderful extra wilds.

If you want to get even close to that maximum of 4,444 x the bet, you’ll have to, very quickly, find the maximum number of retriggers or hit five wilds on a payline several times. 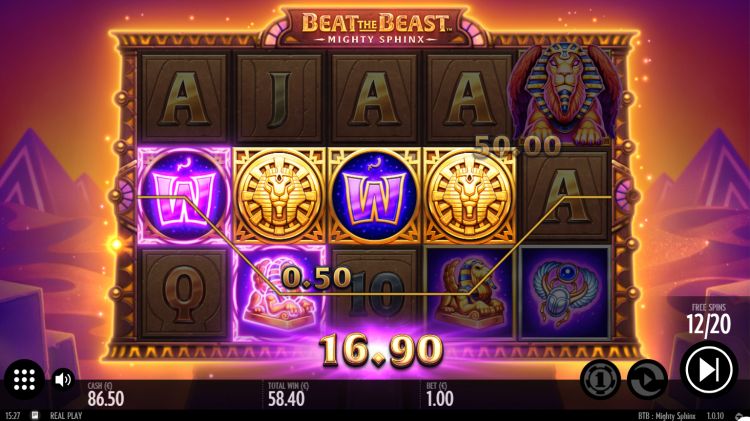 Our verdict on Beat The Beast: Mighty Sphinx?

Thunderkick showcases another piece of craftsmanship with Beat The Beast: Mighty Sphinx, although they have to be careful not to copy and paste all the time.

Mighty Sphinx resembles Kraken’s Lair in design, feel and gameplay. Since Thunderkick wants to release no less than five slots in this series, the next edition will have to be significantly different if it wants to stand out and get our stamp of approval!

So this is a bit middle of the road and uninspiring slot. We hope the designers of the third installment will aspire to make CasinoHipster’s top 10 best Thunderkick slots.