As this lucky cat is called in full, the Maneki Neko is a popular good luck charm in Japan. Japanese believe that the left cat leg brings business prosperity, and the right leg mainly causes happiness and riches.

Therefore, it’s no coincidence that this lucky cat can often be seen with online slots or as the mascot of an online casino, such as Maneki Casino.

The Gigablox (and Splitz) are typical Yggdrasil inventions. Every slot provider tries to invent a unique and recognizable game mechanism.

But let us now dive into Yggdrasil’s lucrative Gigablox with the Lucky Neko slot at hand. 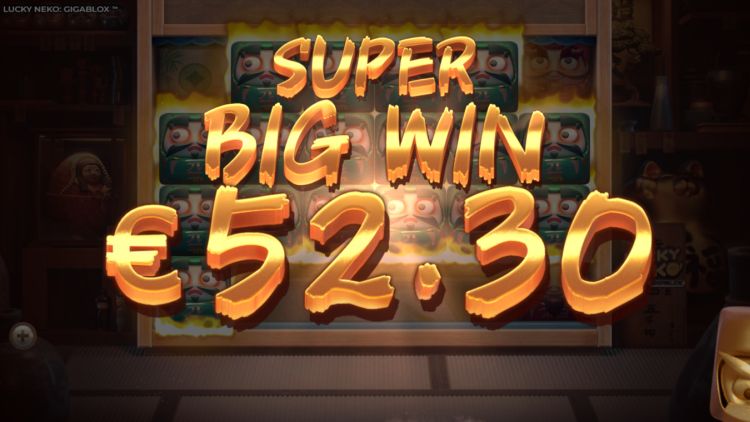 Lucky Neko Gigablox is played on a 6 x 4 playing field of reels and rows of symbols.

Lucky Neko Gigablox has a medium to high variance, and the theoretical payout rate is a cool 96.4%.

Everything in this game revolves around the so-called Gigablox. These are blocks from 2 x 2 to a whopping 6 x 6 (in the bonus game) identical symbols. This can result in ginormous payouts: the maximum profit is no less than 6,953 x the total stake.

The cat is wild and replaces all other symbols except the scatters.

Because there are six reels, a 6-of-a-kind is the highest possible winning combo. The four talismans yield between 200 x and 320 x the bet per payline. This amounts to between 5 x and 8 x the total bet. 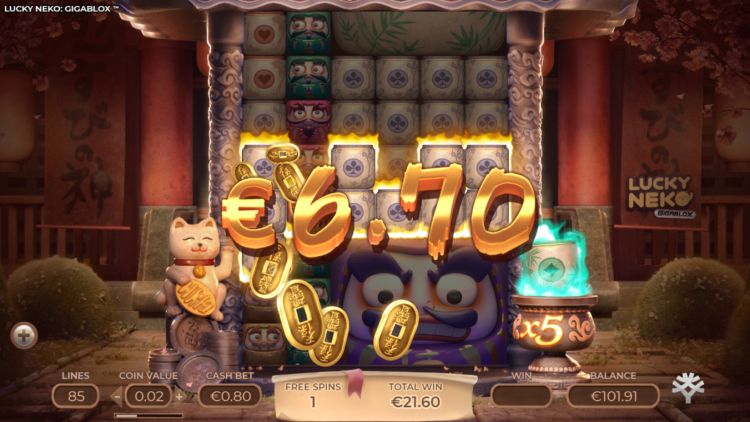 Each scatter yields +1 free spin, so you are always awarded at least 6 free spins, but it can also be many more. Especially a gigablock with scatters is very lucrative.

During the free spins, things roll a bit different than in the base game:

Especially the special symbol can boost your bank account in a big way. Every symbol, except the wilds and the scatters, can consist of a special symbol.

Strangely enough, we have had our greatest success with the low–value special symbols. Although they are worth less than the talismans, they drop much more often. But then again, with an x 5 multiplier and all those extra paylines, your profits can skyrocket. 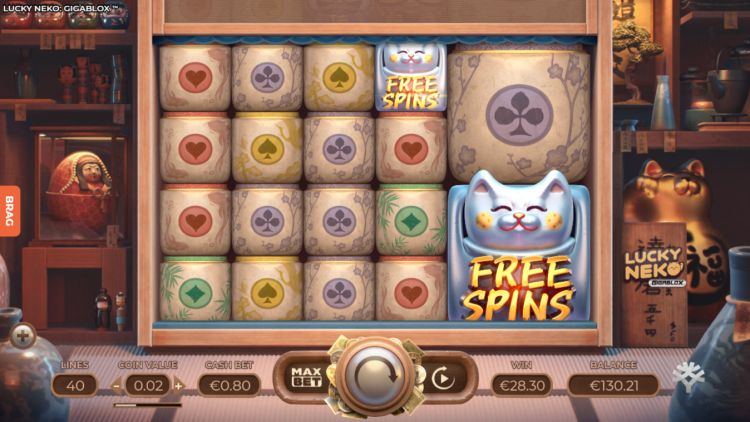 Our verdict on Lucky Neko Gigablox

Because of the Gigablox, every spin is a surprise: out of nowhere, you can land a big paycheck in the blink of an eye.

The only downside is that the base game gets a bit tedious at some point, precisely because you get a gigablox every spin. At a certain point, that gets old.

But the free spins bonus, with even bigger Gigablox and special symbols that pay out massive sums of money, make up for it.

By the way, if you did not know the meaning of ‘arigato’ (thank you) in Japanese. After this game, you will never forget…