Who doesn’t know Rich Wilde? Our protagonist of the Play’n GO’s most famous slot, Book of Dead? The hero also went on adventures in slots like Pearls of India, Aztec Idols or Tome of Madness.

In his last adventure, in Shield of Athena, he got accompanied by his daughter Cat, which she did with merits. Afterwards, it made a lot of sense to go by herself, which she did in Cat Wilde and the Doom of Dead.

Now she goes back to Ancient Egypt. The good news? The stakes are higher! 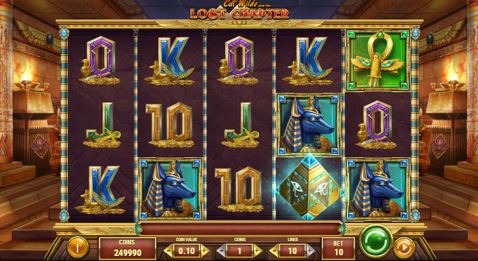 Cat Wilde and The Lost Chapter: the maximum win is 10,000x

That’s twice as high as most of the slots mentioned above, such as the Book of Dead slot.

In short, it is more than worth having a try, if you’re keen to go for the more massive wins.

Cat Wilde and The Lost Chapter slot – Gameplay and Features

The Lost Chapter has a 5×3 setup with 10 variable paylines (so you can also choose to play with one payline).

The highest-paying symbol is Cat Wilde herself. If you bet on one variable payline and get 5 Cat Wilde symbols on that payline, you land the insane max win of 10,000x.

The Wild symbols (golden W’s) replace all symbols except Scatters. The good news is that these are also paying symbols, and as lucrative as the Cat Wilde symbols.

The Golden Pyramids are the Scatters. How to get the free spins – 3 pyramids

The free spins – the special symbol

Unlike Play’n Go’s other Book of Ra slots, you get a different special symbol for each different free spin. I like it, as it increases the thrill, making it possible to land the maximum win in one spin.

The special symbol expands over an entire reel if you make a win. The advantage is that the symbols do not necessarily have to be adjacent, starting from the first reel.

For example, if you have 3 identical symbols on reels 2, 3 and 5, that’s just as well a winning combination.

Yes, it’s exciting if the special symbol is the Cat Wilde symbol. If afterwards, you spin at least one Cat symbol and/or a Wild symbol on all reels, they will expand. That gets you the full screen of the highest paying symbols. In other words, 10,000x the bet! 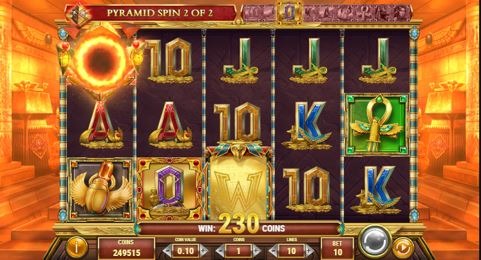 You activate the Pyramid spins if you spin 2 to 5 scatters (pyramids) during the free spins.

Cat Wild and the Lost Chapter has the Gamble Feature, where it’s possible to double or even quadruple your win. 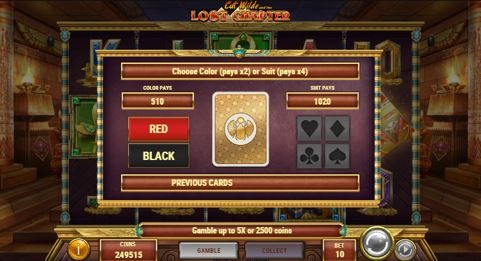 The default RTP of Cat Wilde and the Lost Chapter is 96.2%. As you know, with Play’n GO slots, online casinos may offer versions with lower RTP. It’s best to check the game rules before you start to play.

The variance of Cat Wilde and the Lost Chapter is very high.

According to Play’n GO, the variance is very high, and I do not question it. The idea that you can get the max win of 10.000x with one spin makes a strong case!