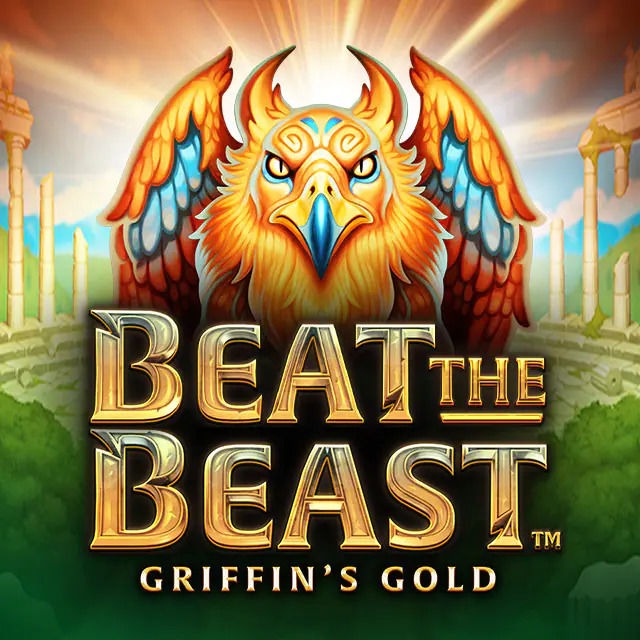 Beat the Beast: Griffin’s Gold from Thunderkick is a stunning slot with massive win potential and high variance. Keep your eye on the prize, as the max win is no less than 22,222 times the stake.

The griffin (Griffin) is a striking and fabulous beast. It has an eagle’s head, wings, upper body, lower body, four (!) legs of a lion, and a horse’s ears.

His task was to guard hidden treasures in Ancient Greek mythology, and that’s what this slot is all about. It is no surprise that the slot must stand out with such a spectacular theme.

And I can confirm that it does.

The animations are spot-on, and Griffin’s Gold is undoubtedly the most volatile Thunderkick slot!

For Thunderkick, it’s massive! Only Riders of the Storm and Carnival Queen have a higher max win.

The game has 5 reels with 3 rows of symbols, and there are 9 fixed paylines:

The main game plays straightforwardly and is probably a bit monotonous. It is best to win the free spins rather sooner than later.

That’s pretty straightforward with this slot. Land 3 or more Scatters, and you activate 10 free spins.

Free spins: sit down and enjoy because this is where the fireworks begin

The free spins play the same as the main game, but there are two crucial differences. You have the Roaming Wild symbols and the Wild Multipliers.

We have the Roaming Wild symbol, which replaces all other symbols, but, more importantly, remains in play for the remaining free spins!

The Roaming Wild roams (wanders) to another adjacent position on the reels for the subsequent free spin. You can get up to 3 Roaming Wilds.

By the way, if one more Roaming Wilds are part of a winning combo, you win one extra free spin.

But it gets even more fun.

It’s not exceptionally high, but it’s certainly not bad.

The volatility is calculated and is 16.96, according to Thunderkick. I can confirm that the variance is towering high and that it is, until today, the most volatile Thunderkick slot.

Wins of a few thousand times the bet are, without a doubt, feasible.